Today the MLB season is shortly put on hold due to the Allied invasion in Normandy. But still, a perfect game is thrown. How? Read on and you will find out.

In the year the St. Louis Cardinals will win it all, MLB is putting the season on hold because of the Allied invasion in France. For the coming eight days, no Major League Baseball games will be played.

During the war in Europe, many baseball players will give their life to liberate Europeans from the Nazi yoke. On the first day of the invasion alone, four Minor Leaguers are killed in action. 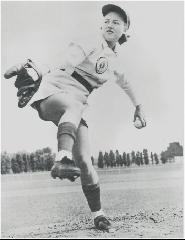 Still, a perfect game is pitched. Coming from a baseball family (her father stood out in the PCL with the Hollywood Stars) Annabelle Lee, aunt of future Major Leaguer Bill “Spaceman” Lee will pitch the first of five perfect games in the AAGPBL (All-American Girls Professional Baseball League). The left-handed knuckleballer, who is playing for the Minneapolis Millerettes, will also throw a perfect game for the Fort Wayne Daisies exactly one year later, although some sources say this was a no-hitter. In her first perfect game, she doesn’t allow a batter to reach base in an 18-0 clobbering of the Kenosha Comets.