In today’s episode of “Baseball Related Songs,” we pay attention to “The Man With the Broom (Epilogue)” performed by Brocker Way. This is the final piece of music of the Netflix documentary “Battered Bastards of Baseball.”

Brocker Way is an is an actor and composer, known for #TAKEMEANYWHERE (2018), Passport to Paris (1999) and Battered Bastards of Baseball (2014). He makes music in and around Los Angeles, California, his home state. The Soundtrack of Battered Bastards of Baseball was released in 2014 at the same time as the Netflix documentary. Other works include Dance of the Crazy Man (2008), a collaboration with his brother, filmmaker Chapman Way, and surfing documentary Best Hours of the Day (2003). Brocker Way is a nephew of actor Kurt Russell, who also played for the Portland Mavericks and the grandson of Bing Russell, Kurt’s father. So perhaps not strange he wrote and performed the music for this documentary. 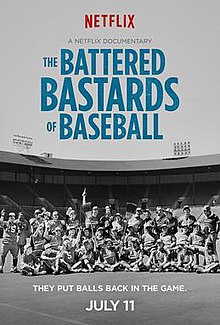 The song “The Man With the Broom (epilogue)” is the final piece of music of the documentary in which several persons that played an important role in the Portland Mavericks organization have their final say on the club and on Bill Russell. Especially the monologue of Todd Field, in the days, the batboy of the Portland Mavericks is touching as he tells how he won an Academy Award for the best movie in 2002 (In the Bedroom) and how he came at the dying bed of Bing Russell, who said that he had always watched him and that he was very proud of him.

Also, the epilogue of the former catcher Jim Swanson (Swannie) is interesting as he tells how his glove should be in the Hall of Fame in Cooperstown as he was the only left-handed catcher in baseball.

For those who haven’t seen “Battered Bastards of Baseball” yet, it is a documentary about the independent Portland Mavericks that played in the Northwest League from 1973 through 1977. After the Portland Beavers left for Spokane to become the Indians, former Bonanza star and actor Bing Russel tried to fill the void by planting an independent minor league team in Portland. The first reactions were far from pleasant as Portland used to be a AAA town and now a low A ball club showed up. But pretty soon, the opinion of the fans turned like a leaf as the club kept winning and put up a nice show on the field and in the stands.

But as expected, organized baseball didn’t like Bill Russel and did everything to make the Mavericks lose. Eventually, as they saw the success of Russel, the Pacific Coast League decided to return to Portland and so the Mavericks had to make room. But Bing Russel didn’t go without a fight. The normal compensation for a minor league owner to make room was $5,000. But Bing Russell wanted $206,000. After an arbitration hearing, the judge appointed $206,000 to Russel. With that, it was the highest compensation ever paid.

Then the lyrics. This song is an adaptation of the “Man With the Broom” that is played at the start of the documentary. In this epilogue version, nothing more is sung like Make us a Show, oh, oh, oh, make us a show.

For those who haven’t seen “Battered Bastards of Baseball” yet, it is a must-see. It shows how Minor League Baseball and Major League Baseball is an old boys network that doesn’t accept strangers. It gives a good view of how independent baseball worked back in the days.

The soundtrack of the documentary is absolutely worth listening to.