The second part of baseball related songs is about Boys of Summer, sung by former lead singer and drummer of the Eagles, Don Henley. This song reached no. 5 on the Billboard Hot 100 chart and no 1 on the Billboard Top Rock Tracks. 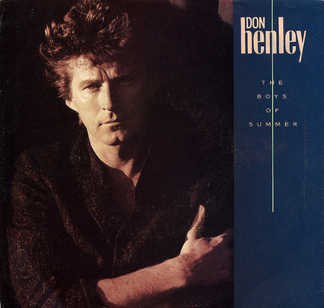 Rumor has it, Don Henley wrote the song while writing for Tom Petty’s album Southern Accents in 1984. Petty liked the song but felt it didn’t fit into the album’s flow. Even though Henley wrote for Petty at that time, he was allowed to use the song himself.

Even though the song may sound like the singer is trying to get back a lost love, Henley once stated in an interview with Rolling Stone it is about aging and questioning the past, which is a returning item in Henley’s lyrics. This can be found in the line “A little voice inside my head said don’t look back, you can never look back”

One part of the song is based on Henley’s experiences. The Deadhead sticker on a Cadillac part was explained as “I was driving down the San Diego Freeway and got passed by a $21,000 Cadillac Seville, the status symbol of the Right-wing upper-middle-class American bourgeoisie – all the guys with the blue blazers with the crests and the grey pants – and there was this Grateful Dead ‘Deadhead’ bumper sticker on it!”

You may think, “Ah well, that’s nice. But what is the relationship with baseball in this song?” Well, let me explain. In the chorus of the song, Henley sings:

But I can see you,
Your brown skin shining in the sun.
You got your hair combed back
And your sunglasses on, baby.
I can tell you my love for you will still be strong
After the boys of summer have gone.

Next to a reference to boys or men who come to a tourist area or vacation location during the summer season then leave, “Boys of Summer” is also a nickname for baseball players. That reference comes from the book “Boys of Summer” by Roger Kahn (a must read by the way). It is a story about a sports journalist who spends his days with the Brooklyn Dodgers in which Kahn describes his days as a sportswriter for the New York Herald Tribune. Kahn, on his turn, took the title of the book from the poem “I see the boys of summer” by Dylan Thomas which has absolutely nothing to do with baseball.  The poem describes “the Boys of Summer in their ruin.”

So in the lyrics, Henley explains to his lost love that he will still love her after the baseball season is over. The choice for this metaphor can be explained easily as Henley is an avid Dodgers fan.