Today it is exactly 72 years ago that the Brooklyn Dodgers acquired the contract of Jackie Robinson. It would take five more days before Robinson would make his MLB debut. 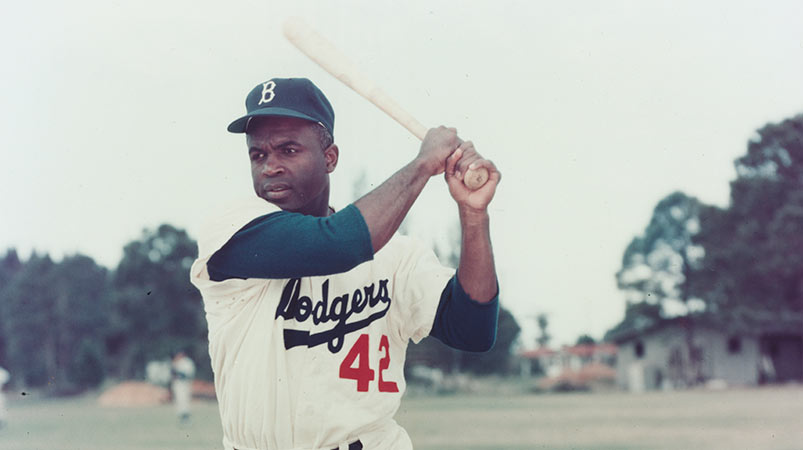 It was during an exhibition game against their AAA team, the Montreal Royals, where Robinson was playing after he signed a contract with the Dodgers when Branch Rickey made a short announcement to the press during the sixth inning. In this announcement, he stated: “The Brooklyn Dodgers today purchased the contract of Jackie Roosevelt Robinson from the Montreal Royals. He will report immediately.”

In 1945, Robinson was picked from a list with promising Afro-American players. During a three-hour conversation with Branch Rickey, Robinson was told that he expected him to withstand the racial slurs and discrimination he would face without no doubt. Robinson asked: “Are you looking for a negro who is too afraid to fight back?” But Rickey answered: “I am looking for a negro player who has the guts not to fight back.” When Robinson promised not to fight back, he was signed to a contract that would pay him $600 per month.

When Robinson reported at Daytona Beach for Spring Training in 1946, the first sign of discrimination reared its head when the manager of the Montreal Royals asked Branch Rickey to assign Robinson to any other Dodgers’ affiliate but the Royals.
During Spring Training in Florida, local authorities made it almost impossible for Robinson to play. Eventually, after negotiations of Rickey himself, Robinson got the nod to play with the Montreal Royals against the MLB team of the Brooklyn Dodgers at Daytona Beach.

On April 18, 1946, Robinson made his official debut in a minor league game and thus became the first Afro-American to play in the minors since the 1880s. The fans in Montreal were enthusiastically supporting Robinson but in the USA, Robinson faced hostilities. Nevertheless, he was named International League MVP in 1946.

Five days after Robinson was added to the MLB roster of the Dodgers, he debuted with the team. Especially during that first season, he would face hostile and racist remarks and even death threats. Robinson would play for the Brooklyn Dodgers for ten seasons. His relationship with Walter O’Malley, who became the owner of the Dodgers, was troubled. O’Malley who had made Branch Rickey leave the Dodgers regarded everyone who had to do something with Rickey as bad guys. This explains the poor relationship between O’Malley and Robinson. Eventually, after the 1956 season, O’Malley wanted to trade Robinson to crosstown rival the New York Giants. Even though he doubted if he would join the Giants for a while, Robinson decided to retire rather than to join the arch-rival.

In 1962, he was voted in the Hall of Fame on the first ballot. Previously he tried to encourage the voters to consider his on-field capacities instead to vote for him because of what he has meant for baseball.

After his baseball career, Robinson would be part of the human rights movement, until his death in 1972.