On this day, twenty years ago, Yankee pitcher David Cone pitched a perfect game, a feat he didn’t manage with Royals, the Mets, the Blue Jays and the Red Sox.

On Yogi Berra Day, in a legend-filled Yankee Stadium, Don Larsen threw out the first pitch to 1956 battery mate Yogi Berra to commemorate Larsen’s perfect game during the 1956 World Series. What made the ceremonial first pitch extra special was the appearance of Yogi Berra. After a long feud with owner George Steinbrenner, he accepted the invitation to return to the Stadium that day.

In the game vs the Montréal Expos, Cone was literally unhittable. He never worked a count more unfavorable to the pitcher than 2–0. A 33-minute rain delay interrupted the game in the third inning. Cone got plenty of run support as the Yankees scored the bulk of their runs in the second inning. In the third inning, Cone recorded three strikeouts. In the eighth inning, Knoblauch made a good defensive play when Jose Vidro hit a ball hard between first and second. Knoblauch moved quickly to his left and fielded it cleanly, retiring Vidro and preserving the perfect game. 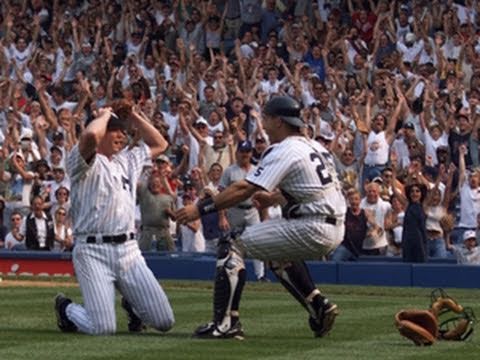 In the ninth, Cone started to strike out Chris Widger. Ryan McGuire hit a soft fly ball to left field. It looked like Ricky Ledée appeared to have lost the ball in the sun, but made the play, and would say afterward he was not sure how he did so. The last batter, Orlando Cabrera, popped up to third baseman Scott Brosius in foul territory to end the game. Immediately afterward, Cone fell on his knees and into the arms of his catcher Girardi.

After the final out, Don Larsen could be seen smiling in the press box. In the clubhouse at his locker, Cone met with Don Larsen and Yogi Berra, who both hugged him very tightly.

Cone’s perfect game was the first perfect game during an interleague game and to date, it is the only one. It was the 247th no-hitter in MLB history. Currently the Yankees are tight with the White Sox for being the only clubs to record three perfect games.