Louisville Slugger, the famed bat company from Kentucky is also hit by the coronavirus. The 165-year old company, not only known for its bats, closed its doors and sent 171 employees on a leave.

About 10% of the employees keep working but with a 25% pay cut. Nevertheless, the 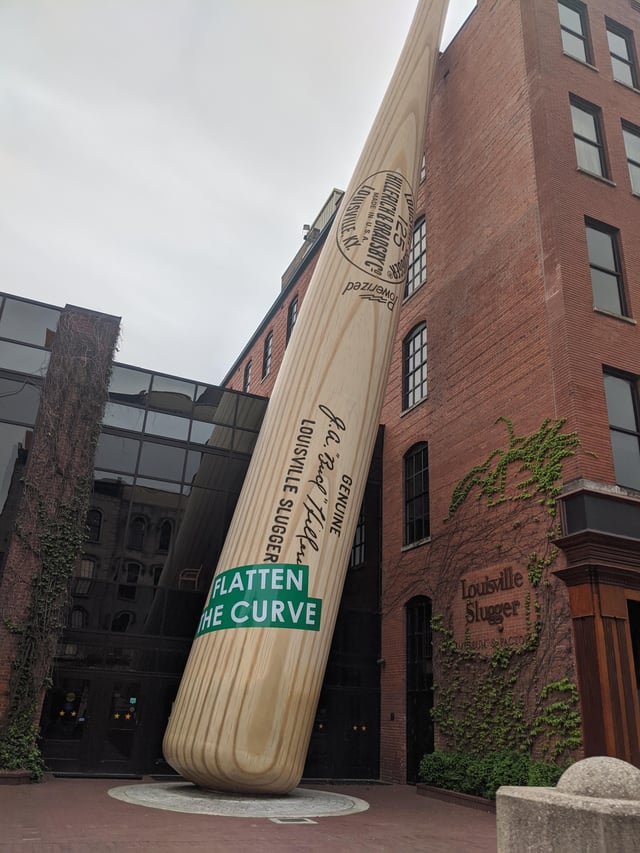 company will continue to cover all health care benefits for its 171 furloughed workers.

The big bat outside that leans against the building now has a tag on it saying “flatten the curve.”

Of the 2 million bats the company produces per year, about 50,000 are going to Major League Baseball.

Of course, the company is known best for its wooden and aluminum bats, but it also produces baseball mitts, batting gloves, golf clubs, and golf gloves.

A bit of the history of the company:

J.F. Hillerich started a woodworking shop in 1855. The story goes that he hired his seventeen-year-old son, John “Bud” Hillerich, who slipped away from work one afternoon in 1884 to watch Louisville’s major league team, the Louisville Eclipse. The team’s star, Pete “Louisville Slugger” Browning, mired in a hitting slump, broke his bat.

Bud invited Browning to his father’s shop to hand-craft him a new bat to his own specifications. Browning accepted the offer. As soon as he got his bats, he broke out of his slump with three hits with his new bat the first day he used it. Browning endorsed the Hillerich woodworking shop to his teammates.

J. F. Hillerich was not interested in making bats at all; he saw the company’s future in stair railings and porch columns. His son Bud, however, saw the potential in producing baseball bats, and the elder Hillerich eventually relented to his son. The bats were sold under the name “Falls City Slugger” but as soon as his son took over the company, the name “Louisville Slugger” was registered with the U.S. Patent Office.