Most of you will know by now that I would regret the contraction of 42 minor league teams by Major League Baseball, especially for the (IMO) made-up reasons. So I thought “What’s better to have a former minor leaguer have his say about the minors to (perhaps) cast some new light on the issue?” And what is easier to ask a Dutch player, so you can ask the questions in your own language?

Former Major Leaguer and current pitcher for the Fukuoka SoftBank Hawks Rick van den Hurk was so kind to answer a couple of questions. 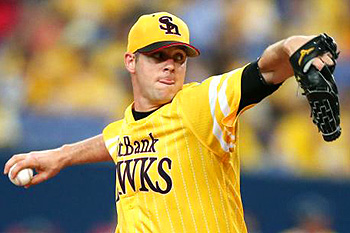 On the first question of how Rick has experienced the minor leagues, he gave the following answer: “I experienced my years in the minor leagues as a very good training and as a good foundation for the remainder of my career. The quality of the facilities and traveling are important. Even though the facilities are not top-notch, it helps to build strength and to develop as a baseball player, it helps to develop as a human being and as a person. It also helps to build your nature.”

Rick stated that there are facilities where you rather don’t want to be. But these poorer facilities help you to work harder, to expand your pitch arsenal. They help you to stay motivated to climb the ladder towards the Major League temples even faster.

The difference between the facilities of AAA clubs and (low) A clubs is enormous. At AAA you play in big cities and the facilities over there are very good. At the lower levels, you play in Small Town America and the facilities in those places do not come close to those at AAA. At the lower levels, the locker rooms aren’t always clean, several kinds of creatures crawl across the floors but according to Rick, that’s part of the deal. It inspires you to work harder because you don’t want to spend too much time at places like that and especially that makes you grow.

Traveling is also an issue at the lower levels. (Low) A-ball clubs only have one bus to bring the team to other towns. Those buses aren’t really comfortable. At AAA, on the other hand, teams travel with two busses or even have sleeper busses. And of course, to get to some cities, teams have to fly at AAA.

According to Rick, it is a shame that 42 teams will likely be contracted. Even though the facilities were not the best at some places, playing in the minors has its appeal. Rick stated that he is proud that he managed to work his way through several stages of Minor League Baseball. If 42 clubs will be contracted, it will be harder for many players to get a contract in affiliated ball.

I would like to thank Rick for the time he took to answer my questions. I also want to thank his wife Anneloes for answering the e-mails. The help of both of you is really appreciated.