In the Deadball Era, a period in which runs were not scored by a lot of home runs, every team fought hard for each run. One team mastered the way of producing runs: The Baltimore Orioles. This small ball, back then called inside baseball, brought them three consecutive National League pennants in 1894, 1895, and 1896. 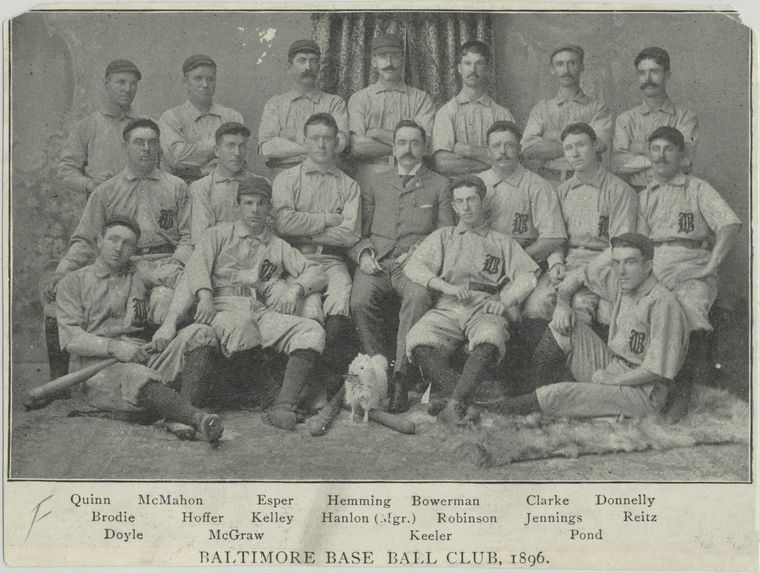 A part of their small-ball approach, the O’s practiced hitting a ball hard into the ground right in front of home plate so it would bounce up high to prevent the catcher from fielding it directly as it moved slowly to other fielders to give the hitter enough time to leg it out for a single. Especially player-manager  John McGraw, Joe Kelley (slide Kelley, slide), Steve Brodie, and Willie Keeler mastered this kind of hitting.

The rowdy McGraw, the oldest son of Irish immigrants, ordered his groundskeeper to pack the dirt tightly around home plate, mix it with hard clay and leave the infield unwatered. This was just one example of their creative groundskeeping. As a result, the area around home plate was so hard, the ball easily bounced when McGraw and his teammates hacked for the ball. This, their foul mouthing towards opponents and umpires and their rough play, made them a team hard to beat.

Creative groundskeeping was not something that was practiced by the Orioles alone. The Cleveland Spiders, for example, let the outfield grass grow so high, they could hide balls in it that could be used when a ball that was brought into play was not reachable.

Nowadays, there is a team called after the art of hitting. In the Maryland Collegiate Baseball League, a team is called the Baltimore Chop. The team colors are orange as a team from Baltimore should sport and the logo resembles the Atlanta Braves Tomahawk.