In this episode of Baseball Related Songs, we pay attention to “Laughing River” performed by Greg Brown. The song is about a minor leaguer who hangs up his spikes after a twenty-year career. |

Greg Brown is an American folk musician from Iowa. He was born into a musical family so the apple didn’t fall far from the tree. After traveling some years with a band, he returned to Iowa where he continued his songwriting career. Through the years, Brown released about twenty-four albums. His debuting album was Hacklebarney in 1974. In 1980 and 1981, he self-published two albums, 44 & 66 and The Iowa Waltz. A friend of his started a record company called Red House Records and Brown was his first recording artist. His album One Big Town (1989) won an Indie Award from the National Association of Independent Record Distributors.

Greg Brown’s music style is not easy to describe. At times it sounds like country-western  (like this song does) but in general, it is hard to put a label on it. 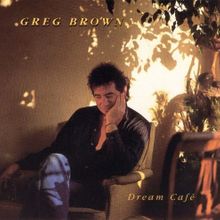 “Laughing River” comes from the album “Dream Café” which was released in 1992.

The song “Laughing River” is about a minor leaguer that calls it quits after a twenty-year career in the Minors without ever reaching the Majors. He didn’t want to do the same trick he did for twenty years anymore so he decides to move up in Michigan.