Today, 46 years ago, David Clyde made his debut in the Majors with the Texas Rangers. Nothing special one would say. Well, the path he followed to get there was rather intriguing to put it mildly. 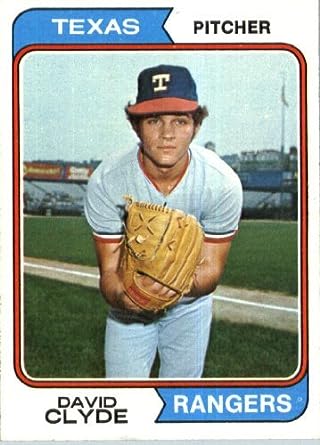 David Clyde had a stellar high school career with Westchester High School, located in Houston. Clyde helped them to win the state championship on June 3rd 1973. After he was drafted as first overall pick, he was added to the Texas Rangers’ roster. The intention was to have him pitch two games before they would send him to the minors. Of course, this was a publicity stunt. Clyde was regarded as the next Sandy Koufax.

But instead of sending him down after two games, Rangers’ owner, Bob Short, decided to keep Clyde on the roster for financial reasons. The Rangers had just moved to Arlington from Washington and were not drawing too well. Short found in Clyde the perfect way to boost the attendance as the Rangers would field a fellow Texan boy. Short let Arlington Stadium expand by 20,000 seats.

After a 4-8 record and a 5.01 ERA in his first season with the Rangers, the 1974 season would not be much better as he clinched three wins and got nine losses. His ERA dropped to 4.38 though.

After the two uneventful years of his career, things turned bad for Clyde as he was hit by the injury bug as he developed a shoulder injury. He was sent down to the minors in 1975, where he would stay three seasons before he was traded to the Cleveland Indians. He played two seasons with the Tribe before he was demoted again.

Clyde tried to make a comeback with the Houston Astros but never transcended AAA. After one season with the Astros’ AAA farm team, his career was over.

Even though his career with the Rangers was short-lived, Clyde is regarded as the savior of the Rangers. According to journalist Randy Galloway, Clyde put baseball on the map in Dallas, as the city started to get interested in the sport, even after Clyde’s inconsistency forced him out of the league. Clyde nearly drew a third of the attendance during his first season with the Rangers. During his starts, there was nearly a capacity crowd while the other seventy-five home games averaged 6,000 fans.

Clyde’s career made him the “poster-boy” for bringing up young players prematurely and dealing with arm injuries. Randy Galloway named him the prime example among the worst cases of “mishandling” a young player in baseball history.