It has become a tradition. An overview of the national champions of most European countries per season. This year we will sum up the champions per country once again. As 2020 was a strange year due to the COVID-19 virus, baseball wasn’t played in some countries and in others, no playoffs were played. Nevertheless here is an overview of Europe’s best teams.

Belarus:
A bit of an odd situation in Belarus this season. The club that has dominated Belarus baseball for years, split its team up into two teams: Minsk 1 and Mins 2 (which was basically a U18 team). It may not come as a surprise that the championship series was played between these two teams and that Minsk 1 won the championship.

With the season starting in late June and being put on hold in August, the Baseball Gold league in Belgium was played nevertheless. This time no playoffs were played and no official champion was appointed. But one round before the end, the Hoboken Pioneers clinched the 2020 Corona title as they swept the Borgerhout Squirrels, their closest competitor in the standings. Thanks to this sweep, the Pioneers were out of reach of the Squirrels. 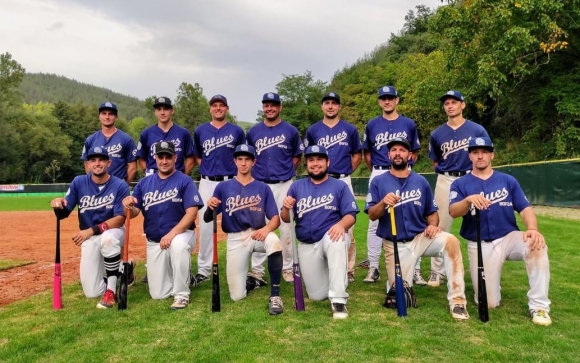 The Sofia Blues three-peated as Bulgarian champion. The team dominated Bulgarian baseball as it finished on top of the standings unbeaten with a 12-0 record. But also in the championship series, the team swept the Blagoevgrad Buffaloes 3-0. This year’s championship is the Blues’ 26th overall.

Croatia:
Croatia has a new champion. After Nada Split broke up their streak last year, Olimpija 83 Karlovac won the 2020 championship in six games over Nada Split.  The final game, that was dominated by both starting pitchers, was won by Olimpija 3-1. This is the club’s third title in four years. 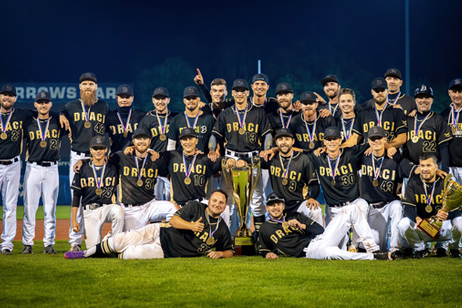 After a two year absence, the Dragons from Brno (Draci Brno) are back at the top and clinched its 22nd Czech title. After taking a 2-0 lead in the series, Brno lost to Arrows Ostrava in the third game but in game four, the Dragons prevailed thanks to home runs by Přemek Chroust and Petr Čech.

Denmark:
For the seventh time in a row, the Urban Achievers from the Danish capital Copenhagen have won the Danish championship. They needed all three games of the best of three series to accomplish the feat. After the Aarhus Athletics won the first game of the series 9-0, the Achievers won the second game 8-7, forcing a third and decisive game which it won 12-3. 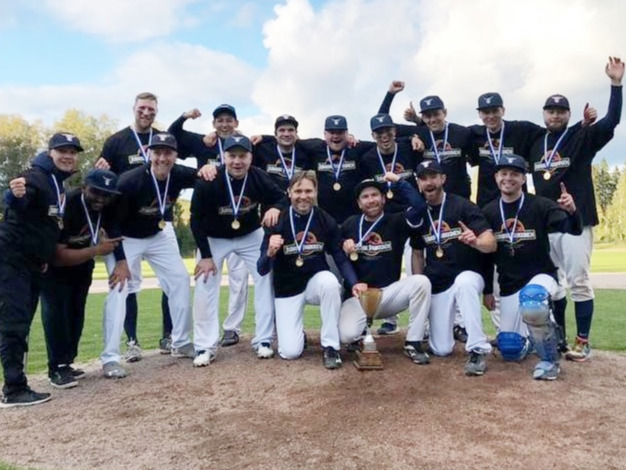 The dominance of the Espoo Expos continues. This year the championship series was a rematch of last year as the Expos took on the Tampere Tigers. Last year the Tigers gave the Expos a run for their money (kind of) but this year they were no match as they were swept in three games (20-5, 9-0, and 9-0). This is the Expos’ seventeenth Finnish championship.

France:
At an early stage of the year, the French Baseball Federation decided to call the season due to the coronavirus. So no French champion this year.

This year’s German championship series was a rematch of the previous two. The Heidenheim Heideköpfe took on the Bonn Capitals. The Capitals were swept in three games (12-3, 2-0, and 8-3), handing the Heideköpfe their second championship in a row, their third in five years and their fifth overall. This year’s Heidenheim team had an extra Dutch touch with pitchers Mike Bolsenbroek and Lars Huijer.

Great Britain:
The London Mets keep dominating British baseball. Not only during the regular season when they topped the standings with a 9-3 record and scoring 128 in those 12 games and only conceding 45 runs but also in the championship weekend when they beat the Lancashire Legends 10-0 in the semi-final and the London Capitals 9-1 in the final.

Hungary:
The Hódmezővásárhely (don’t ask me how to pronounce this) Beavers are the new Hungarian champions. in the championship game vs the Erd Angels, the Beavers prevailed 13-3.

After losing in the championship series vs the Dublin City Hurricanes last year, the Greystones Mariners finally managed to win the Irish championship. After five consecutive lost finals, the team swept the Ashbourne Giants in a best of three series. This year’s title was the team’s second Irish championship ever and their first since 2014.

Italy:
Italian baseball keeps being dominated by Fortitudo Bologna. But the team had to go deep this year. Its opponent in the Italian Championship Series, T&A San Marino, gave Bologna a run for their money. San Marino forced a seventh game that would be played at their home ballpark but with Bologna as home team…
In the decisive seventh game, Bologna took a commanding 5-2 lead but San Marino fought back but just came short as it fell to Bologna 6-5. This is Bologna’s third straight championship and its fourteenth overall. This year’s series had an Aruban touch as Bologna had three players from Aruba in its ranks: Eugene Helder, Ray-Patrick Didder and Randolph Oduber. 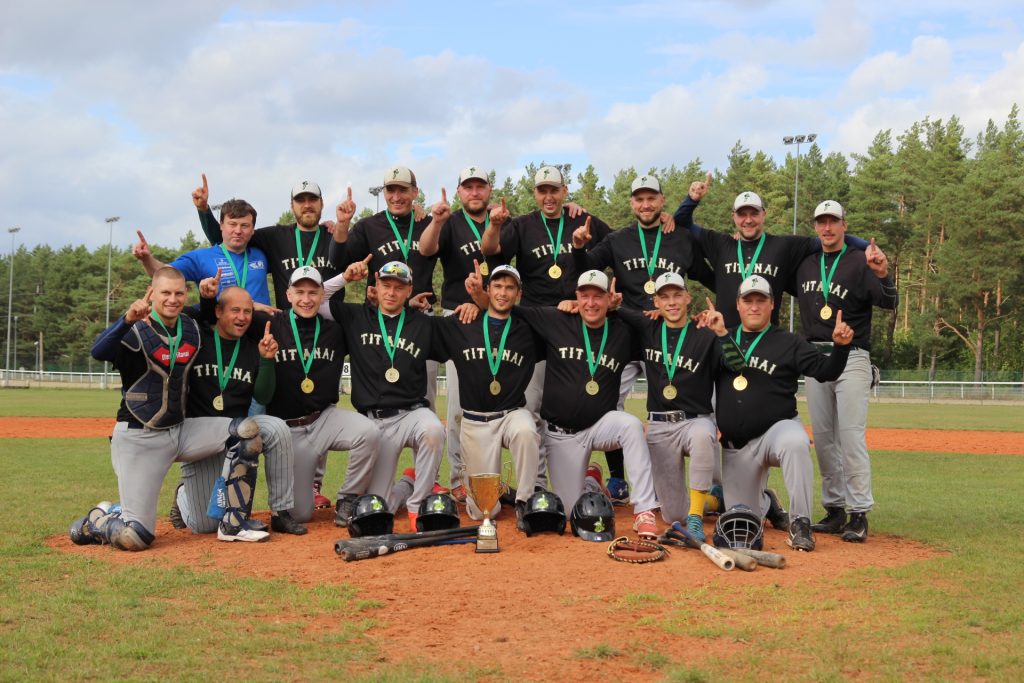 Netherlands:
On Tuesday October 13, the Dutch government announced that all amateur sports competitions would be cancelled due to the increasing coronavirus. As a result, the Holland Series was cancelled right away. It took the KNBSB some days to think on wether a champion would be appointed but eventually the decision was made that there will be no champion in 2020.

The ØHIL Royals repeated as Norwegian champions. In the championship weekend, the Royals beat Trondheim 22-2 in the first semi-final. The Oslo Pretenders took on the Kristiansand Suns and beat them 7-0 in the second semi-final.
In the final, the Oslo Pretenders took a 3-0 lead but could not cling on to it and eventually lost 8-3. Also a Dutch touch here with Tristan Korf, who was born in the Netherlands.

Poland:
Poland has a new champion. After several years of domination by Stal Kutno, the Wroclaw Barons won the Polish championship. This year, due to corona, there were no playoffs scheduled. The Barons finished on top of the standings with a 16-4 record and three wins more than Stal Kutno.

Portugal:
Like France, baseball in Portugal has been suspended. So no Portuguese champion this year.

Romania:
Like France and Portugal, there was no baseball season in Romania due to the coronavirus in 2020.

This year’s championship series was played in a best-of-nine (!) format. Unlike last year when a decisive seventh game (best-of-seven series) was needed, Russtar was vastly dominant as they beat the Moscow Wolves 5-1 in games. The Wolves won the first game of the series 3-2 but after that, they did not stand a chance as they lost 11-4, 11-6, 8-1, 16-5, and 5-2.

Serbia:
This year’s Serbian championship series was a matchup between 19-time Serbian champion Belgrade 96 and Novi Sad, which was chasing its first championship. In a best-of-three series, the young Novi Sad team lost the first game in seven innings: 10-0.  Novi Sad forced a third and decisive game as they won game two 8-4. But Belgrade 96 won the third game in a dramatic fashion as they beat Novi Sad 12-11 in ten innings.

BK Apollo Bratislava is the 2020 Slovakian champion. They swept Angels Trnava 3-0 in the championship series. 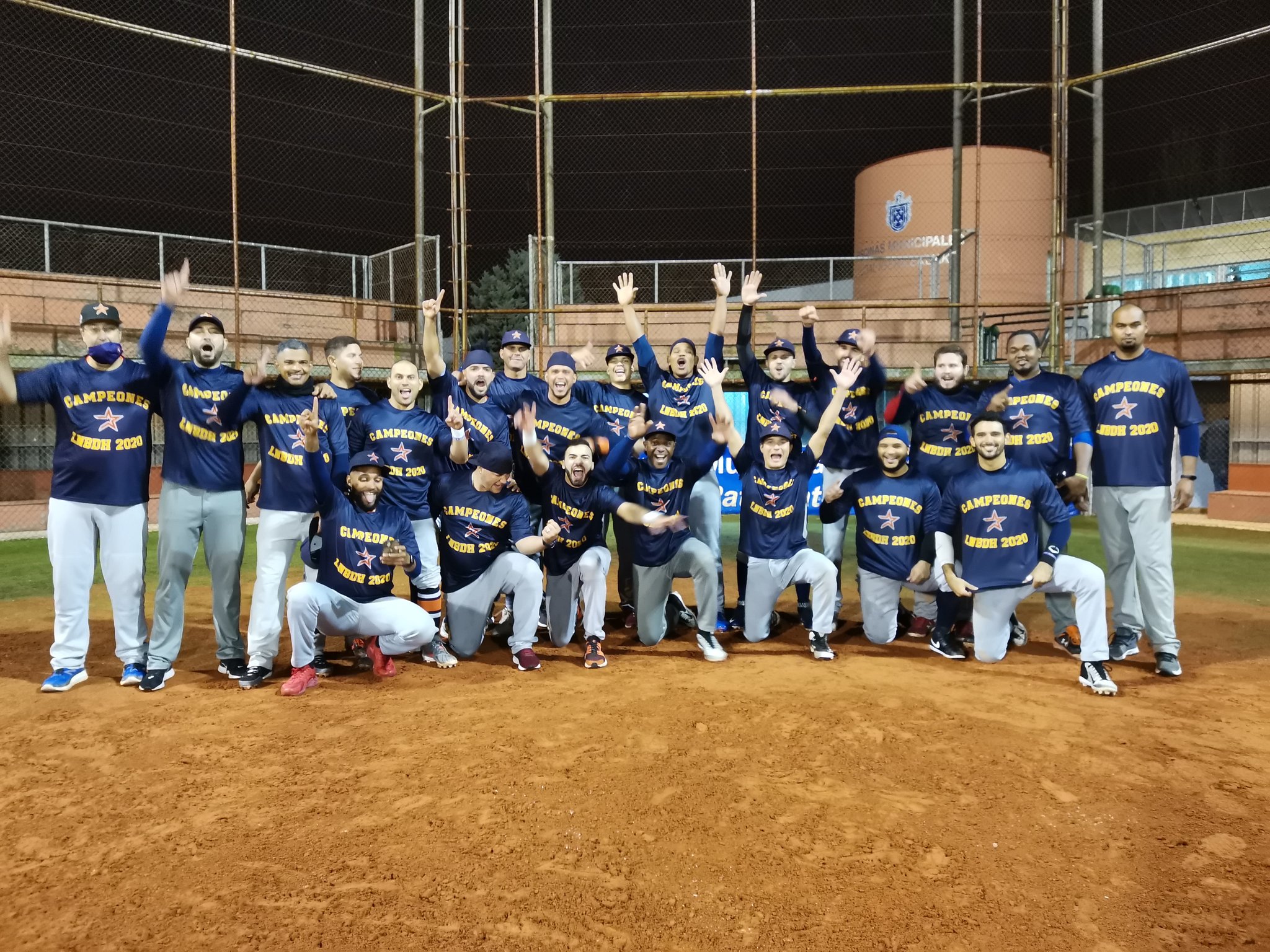 The decision of the Spanish championship came in the last week. When Astros Valencia beat Marlins Tenerife in a doubleheader a few weeks earlier, the team had a slim one game lead. But they did not give it away. The Astros won both games in the final weekend and clinched their third championship after winning it all in 1977 and 2016. 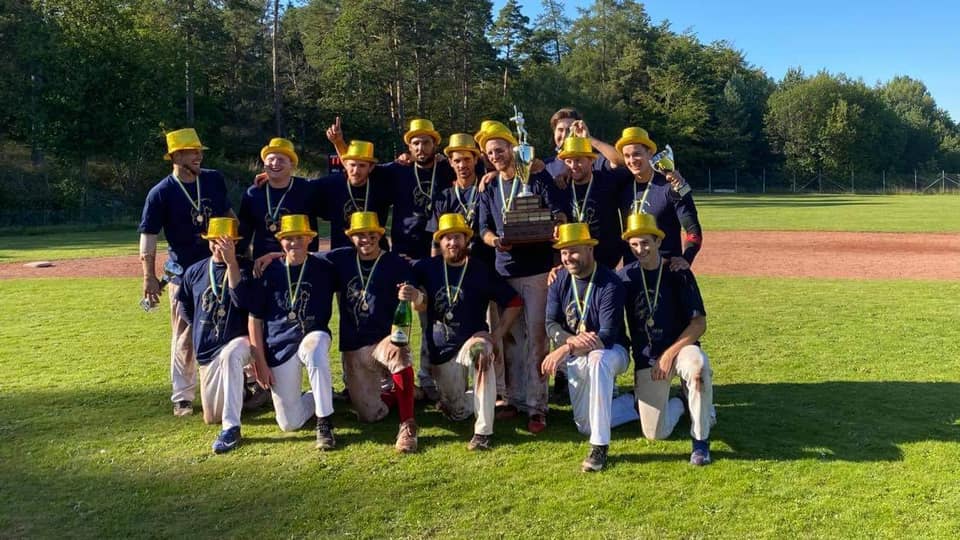 In a best-of-five series, the Sölvesborg FireHawks won the Swedish championship. The FireHawks had to go deep as they needed a fifth and decisive game vs Sundbyberg Heat.
In the decisive fifth game, the Heat was no match for the FireHawks as the latter won 11-1 in eight innings.  It was Sölvesborg’s third title in four years. 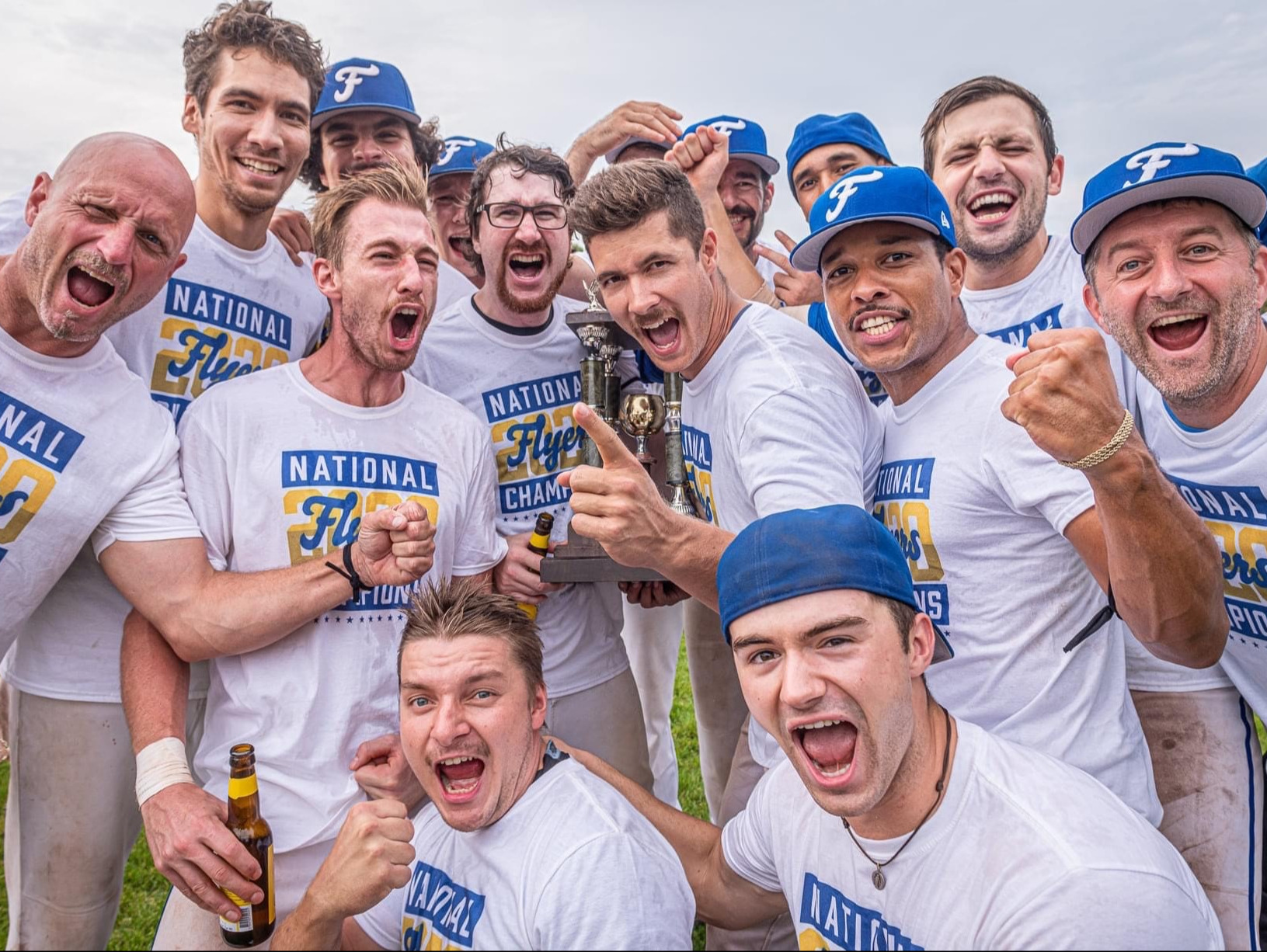 The Therwil Flyers repeated as Swiss champions as they swept the Bern Cardinals in the best-of-five final series of the NLA (National Liga A) and were crowned the 2020 Baseball Champions of Switzerland. The Flyers outscored the Cardinals (16-8, 16-3) in the first two games of the series. They clinched the title with a come from behind Game 3 victory, 6-5. The Flyers were trailing 5-2 but scored four runs in the bottom of the eighth for the championship clincher.

Ukraine:
No surprises in this part of Europe as BiotexCom KNTU clinched its 25th Ukrainian title by beating ATMA 17-3, 18-7, and 13-0. During the regular season KNTU was inexpugnable already as it had a 24-0 record with 409 runs scored and only 43 runs against.

A special thank you goes out to Ilya Sladzinski, who explained the situation in Belarus baseball, to Ray Wojtala, who helped me out with the Polish Extraligi, and to Michel Streur, who cooperated in writing this article.

Where am I?
My latest addition. Authentic road cap of the reigning Belgian champions Hoboken Pioneers. The cap is of the Mexican brand Baja Cragg. Good quality and it fits like a glove.
#pregame #belgianseries #game2 @brasschaat.braves @ @hobokenpioneers @kevin.peeters1 #belgiumbaseball #division1 #baseball #division1baseball #baseballbelgium #dutchbaseballhangout