Today in 1956, Brooklyn Dodgers owner Walter O’Malley sold the home of the Dodgers, Ebbets Field, to real estate developer Marvin Kratter. Looking back, this was the omen of the Dodgers’ move after the 1957 season.

The sale to Kratter included a three-year lease, with an additional two years to be added in January, to stay and play at the Flatbush facility. This meant the ‘Bums’ had a potential home in the borough until 1961.

But we all know that O’Malley was two-faced here. He played like he wanted to stay in Brooklyn but in the meantime he was hammering out a deal with the city of Los Angeles.

Cheapskate O’Malley wanted land in Brooklyn for a fraction of the price. To achieve that he needed the help of Robert Moses, the city’s Construction Coordinator.

O’Malley was free to purchase land of his own choosing but needed Robert Moses to condemn land along the Atlantic Railroad Yards (O’Malley’s preferred choice) in downtown Brooklyn under Title I authority. Title I gave the city municipality power to condemn land for the purpose of building what it calls “public purpose” projects. Moses’s interpretation of “public purpose” was to build public parks, public housing and public highways/bridges. What O’Malley wanted was for Moses to use this authority rather than pay market value for the land. With Title I, the city, aka Robert Moses, could have sold the land to O’Malley at a below market price. Robert Moses refused to honor O’Malley’s request and responded by saying, “If you want the land so bad, why don’t you purchase it with your own money?”

During the 1956 World Series, officials of the city of Los Angeles attended the Fall Classic. They wanted to to entice a team to move to the City of Angels, they were not even thinking of the Dodgers. Their original target had been the Washington Senators (who would in fact move to Bloomington, Minnesota to become the Minnesota Twins in 1961). O’Malley let the city of Los Angeles know that he was interested in a move. First talks made clear that Los Angeles was willing to give O’Malley everything that Robert Moses didn’t want to give. Is it a coincidence that O’Malley sold Ebbets Field to Kratter?

Anyhow, to make a long story short, the City of Los Angeles gave O’Malley what he wanted. After signing the deal, O’Malley came back to Brooklyn wearing a “Keep the Dodgers in Brooklyn” button. So even then he kept lying about his plans. 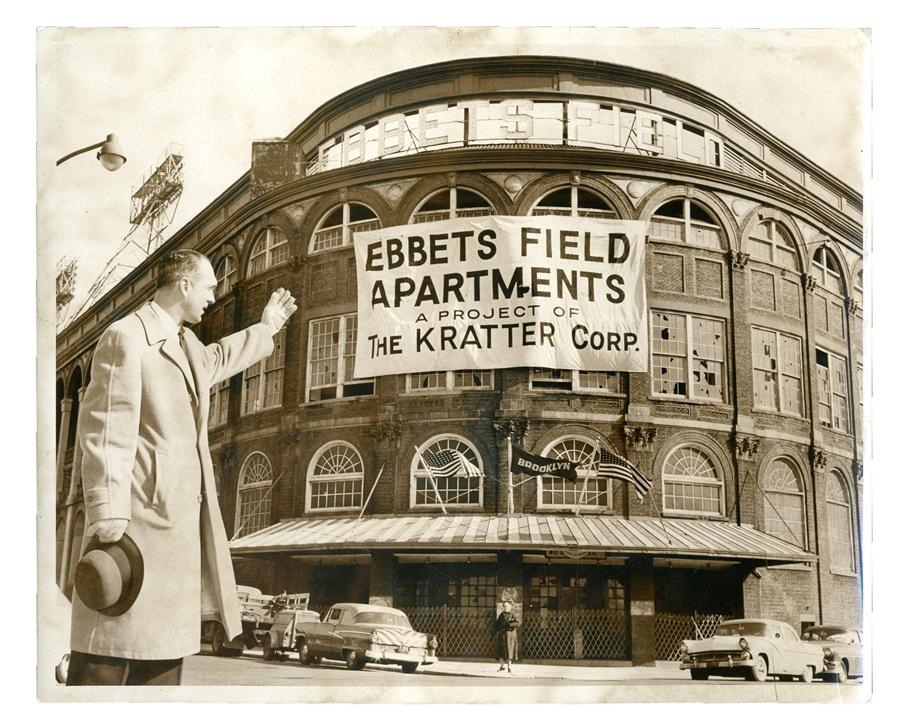 After the Dodgers left, Ebbets Field was used for car races and other events. Eventually, the ballpark was demolished in 1961 and apartment buildings were constructed on the very same spot.

A much heard joke about Walter O’Malley among Brooklynites after the move of the Dodgers to Los Angeles was: If you had a gun with two bullets and you faced Hitler, Stalin and Walter O’Malley, who would you shoot?  The answer: O’Malley, twice.

If you want to read more about the foul play of Walter O’Malley during his days as the owner of the Brooklyn Dodgers, click on this link.