It sounds almost unbelievable but it happened today 104 years ago. (Hall of) Fame(d) shortstop Honus Wagner hit his final round-tripper that happened to be an inside-the-park home run. 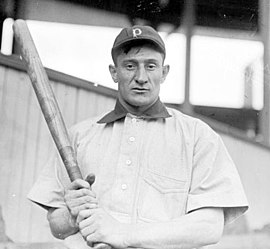 In the fourth inning, Wagner goes deep off Reds’ right-hander Elmer Knetzer in the team’s 2-1 victory at Cincinnati’s Redland Field. Even at the wrong side of forty, Wagner lives up to his (nick)name “The Flying Dutchman.”

Wagner was not of Dutch descent. He was born from German parents and was living in the area of Pennsylvania where the people are called Pennsylvania Dutch. But the word Dutch is lost in translation as the people living there are from German descent and German word for German is Deutsch.

Wagner would finish his career with a total of 101 dingers, including 41 inside-the-parkers, during his 21-year tenure in the major leagues in which he batted .328 lifetime.

He would be one of the first five to be inaugurated in the first Hall of Fame class in 1936, next to Ty Cobb, Walter Johnson, Babe Ruth, and Christy Matthewson.