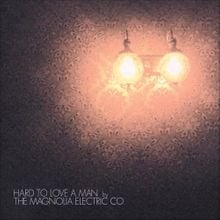 The song comes from the EP “Hard to Love a Man.” Magnolia Electric Co. is the successor of the band Songs: Ohia of which Jason Molina also was the lead singer.

Songs:Ohia was merely a slow core alternate country project in which Molina performed solo at times but also played with rotating musicians.

Born in 1973, Molina started to play guitar at the age of ten. He attended  Oberlin College, graduating with a Bachelor of Arts degree in 1996. After playing bass guitar in various heavy metal bands in and around Cleveland, Molina became a solo artist under an assumed band name, recruiting other musicians for each project as needed, the aforementioned Songs:Ohia. website, explaining certain aspects of his situation for the first time, saying that it had been “a long hospital year”, Molina expressed gratitude and appreciation for the monetary and emotional support he had received from fans and friends. He gave a brief update on his condition, saying, “Treatment is good, getting to deal with a lot of things that even the music didn’t want to. I have not given up because you, my friends have not given up on me.” The note concludes optimistically, saying that there were a few music projects on the “distant radar screen.” (source Wikipedia)

Eventually, Molina died on March 13 at the age of 39 due to his alcoholism. Dutch newspaper NRC had the following headline after his death: “Musician Jason Molina died Saturday, drowned in alcohol.”

The song 31 Seasons in the Minor Leagues is rather depressing. It tells the story of a career minor leaguer whose career is deteriorating. Archivedinnings.com stated the following: When I first saw the title to this song, I immediately thought of Crash Davis in Bull Durham, also a career minor leaguer who, except for a short stint in the show, never made it out of the minors.  The melody and the lyrics are all pretty depressing, but I suppose Crash’s situation as a whole is pretty depressing too.  Had this song existed twenty years earlier, I have no doubt it would have been included in the Bull Durham soundtrack.

Despite the depressing atmosphere of the song, it is one of those little gems.

The lyrics of 31 Seasons in the Minors are as follows: