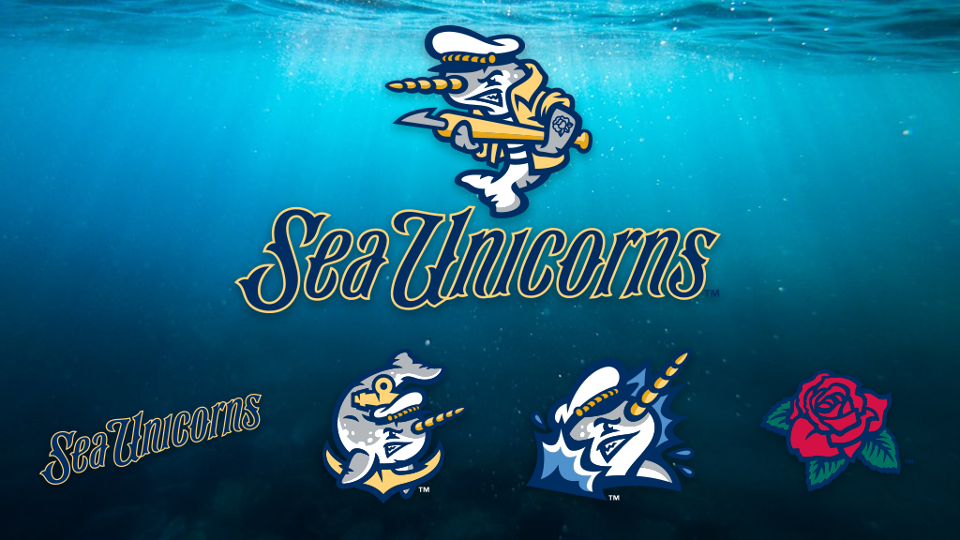 Sea Unicorn refers to a Narwhal, a whale species, that is also called unicorn of the sea due to the long tusk at the front of its head. The choice for the name may seem odd as the Norfolk area isn’t the habitat of the Narwhal.

The name Sea Unicorns beat Golden Roses, Mill Mules, Narwhals and Salty Dogs in a final vote after fans could send their ideas earlier this year.

The club presented three cap logos tonight. All logos show a narwhal wearing a captain’s hat. The first logo holds an anchor. The second logo holds a baseball bat-shaped grappling hook. The third logo shows the narwhal’s head sticking out of the water. With the presentation of the new identity, the club released three baseball caps. The home cap is all navy with the aforementioned grappling hook logo.

The club will sport two alternate caps. The Alternate 1 is navy with a yellow lid and the anchor logo on the front.

Like the home cap, the alternate 2 cap is all navy as well. It sports the logo with the narwhal’s head on the front. For sure the new name is not as outrageous as those of the Paddleheads or Mighty Mussels but one can wonder if it is catchy enough. The logos are eye-catching though, especially the grappling hook logo that adorns the home cap.

“2019 was our 10th season as the Connecticut Tigers and the 25th of having Minor League Baseball in Norwich. Now it’s time to bring new energy to the ballpark and new excitement around our team,” said Sea Unicorns general manager Dave Schermerhorn. “This also coincides with our new [stadium] lease with the City of Norwich, so it’s a good time to bring Norwich back into our name, to strengthen our bond and show how proud we are to be based here.”

Even though the narwhal doesn’t live in the Norfolk area, it is part of several stories and legends told by Norfolk mariners as Norfolk was home to whaling industry.

Next to the three cap logos, the club introduced a rose logo that will be worn on the sleeves of each of the four jerseys the club will sport in 2020. The rose stands for Norfolk as it is called the Rose City and Rose of New England.

It won’t come as a surprise that San Diego based Brandiose created the logos. “We were totally captivated by the prominent role that Norwich had in American history,” added Jason Klein of Brandiose. “Being a port of call, the commerce, sugar, and molasses, textiles being converted after being brought in from the West Indies. … It ended up being about a tough-as-nails sea captain, combined with some of the lore he’d seen on his adventures.”