Last night, the future AAA affiliate of the Boston Red Sox presented its new name and logo. The name was expected, the logo perhaps not so much.

As soon as the Pawtucket Red Sox announced their move to Worcester, the name WooSox swirled around. So that name didn’t come as a surprise. The name is a contraction of the city’s name and the official name of the team, Worcester Red Sox.

Minor League clubs always seem to choose names with a link to the city they are located in. Not 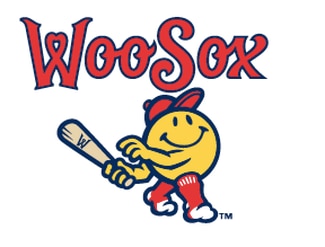 so much with the WooSox. The logo, on the other hand, is a nod to the history of the city.
A smiley swinging a bat. As a matter of fact, the designer of the smiley lived in Worcester, so it makes perfect sense. The son of the designer  named Harvey Ball (what’s in a name?), Worcester attorney Charlie Ball, viewed the WooSox logo design during the process to ensure accuracy, as did Bill Wallace of the Worcester Historical Museum.

The club also unveiled one of their future jerseys. As one could expect with a name like

that, the uniform resembles the uniform of the parent club. A red jersey sporting the name Worcester was shown to the public. As no official cap was presented yet, a W logo was presented as well, which will likely be the club’s cap logo. In the center of the logo, there is a heart shape that refers to the city’s motto that’ it’s the “Heart of the Commonwealth.”

One could expect that the future club, which will be located in Red Sox Nation territory, would have been named after the parent club. But on the other hand, it shows a lack of creativity. Even the Gwinnett Braves revamped so the WooSox could have used this opportunity to create a real own identity. But they chose to be like many Braves affiliates or the Dodgers AAA affiliate: a mini-me of the parent club.