In this edition of Minor League history we are talking about the Middle Atlantic League. The league a continuous run from  1925 – 1942 and later from 1946-1951. The league was mainly located in Ohio and southwestern Pennsylvania but also had offshoots in New York, Maryland and West Virginia.

The first edition of the Middle Atlantic League was a Class C league. The league’s President in the inaugural year was Ray H. Archibald, who was replaced by Elmer M. Daily in the next year and would serve in that position in all of the four editions of the league. His lack of temperament and skills to deal with the egos of the team’s managers and owners eventually led to the replacement of Archibald.

The 1925 Middle Atlantic League started the season with five teams. It would take the league until July 12 to add a sixth team when the Scottdale Scotties joined the league. The team wasn’t a powerhouse as it had only two winning seasons during the first six years of the league.

The most famous player that played in the first run of the Middle Atlantic League was Hall of Famer Joe Medwick. He made his first strides in professional baseball in the

Middle Atlantic League with the aforementioned Scottdale Scotties. In that short season the Scotties played, Medwick made his presence felt as he batted .419. After another season in the Minors (class A Texas League), Medwick broke into the majors. After he was sent down to the Texas League again in 1932, he was promoted to the Bigs again in 1933 and never was sent down again. Medwick was described by his Gashouse Gang teammate, Leo Durocher as the meanest, roughest guy you could imagine. He just stood up there and whaled everything within reach. Doubles, triples, home runs – he sprayed ’em all over every park.” Medwick had a fine 17-year MLB career in which he had a lifetime .324 batting average. Next to the St. Louis Cardinals, Medwick played for the Brooklyn Dodgers, New York Giants and the Boston Braves.

According to Robert Obojski, author of “Bush League (1975), the Middle Atlantic League, which operated in mid-sized industrial cities in America’s industrial heartland, was the toughest of all Class C leagues. There was a big variety in size regarding the population of the Middle Atlantic League cities. Scottdale, for example, had just over 10,000 inhabitants while Akron, that joined the league in 1935, had well over 240,000 inhabitants.

The Middle Atlantic League came to life as a kind of offspring of an informal semi-professional league in the area of Pittsburgh. In the first years, the communities gathered around baseball as merchants closed down their stores on Opening Day to give everyone the opportunity to see the game. In a way, it was a traditional league in those first years as players were locals or came from nearby towns. Only in the course of the thirties, this changed when Branch Rickey set up the farm system for the St. Louis Cardinals, a phenom that would be copied by other MLB clubs in the following years.

Driving force behind the establishment of the MAL was Pittsburgh Sportswriter Richard “Dick” Guy. After the newspaper he wrote for, the Pittsburgh Leader, folded in 1924, Guy decided to become a sports promotor starting with a professional baseball league of his own. By the winter of 1924-1925, he found steady income as a writer of the Pittsburgh Gazette-Times and gained optimism about his professional baseball league. After negotiating with countless cities and towns of which some decided to join but later pulled back again, the league started to take shape by mid-March 1925. Guy called for an organizational meeting in a hotel in Pittsburgh where the owners of the Johnstown, Cumberland, Clarksburg, Fairmont andWheeling (that would be run by Guy himself) and Scottdale clubs decided the name of the league would be Middle Atlantic League. The new circuit would play a 96-game season that would start early May. The rosters of the clubs would be limited to 15 players including the manager, who would be a player-manager. A salary limit per team was set on $2,650. The managers would receive the biggest chunk of that amount ($300) as the players averaged a monthly pay of $167 which was a good salary in 1925. But there was no guaranteed employment as players could be released as they got injured or did not perform well. At best the players had four months of employment.

President Archibald faced the first crisis of the league even before the season had started when the Scottdale franchise dropped out in April. The local police chief, C.E. Gilchrist, who managed two local semi-pro teams, opposed to the fully professional team.
Archibald now faced to tough task to decide whether the league was to disband even before the season had started or it would take off with a less than ideal five-team setting. He opted for the five-team setting. As the step was taken to continue with the league, the teams had to find a place to play. Some were lucky to rent an existing ballpark but others had to improvise. The Clarksburg club rented the local racetrack oval which lacked good sightlines.

The acquisition of players was a manager’s job. Most of the time, these managers used their contacts in the baseball world to get players. As a competitor league, many of the MAL teams signed players from the neighboring Class-D Blue Ridge League. Some MLB and International League teams sent down players to Middle Atlantic League teams.

The distances between the league’s towns were not enormous. The biggest distance, 132 miles, was between Wheeling and Cumberland. Most teams piled in three automobiles to make the trip for a road game series. The only club that owned a bus was the Fairmont Maroons.

Apparently, the city of Johnstown was pleased with the Johnnies’ 1925 championship as the city built a stone/steel/concrete ballpark that still stands today. The new ballpark was a necessity as the previous baseball ground, the Johnnies played on was rather unfit even by the primitive standards of those days as it had no grandstand but just wooden bleachers. The baseball ground was part of an amusement park that was located five miles out of town. It also lacked a clubhouse, so visiting teams arrived in wearing their baseball uniform. The owner of the Johnnies, Frank B. Cook, offered the players to dress at the swimming pool bathhouse but he charged them the full amount of admission, so also the home town players put on their uniform where they lived and hitchhiked to the ballpark and back. It would take until 1940 before the playing surface got a grass infield.

Point Stadium in Johnstown would be the host of an exhibition game between the local Johnnies and the New York Yankees as almost 10,000 people packed the nearly brand new Point Stadium on July 25, 1927. The Johnstown Tribune’s evening edition on July 22, 1927, noted, “Johnstown baseball fans who attend the big exhibition game between the New York Yankees and the Johnstown Middle Atlantic Leaguers in the Point Stadium Monday are certain to see the greatest exhibition of hitting ever witnessed in this city.”
As Ruth was happy to shake hands of fans and signed autographs during the game, the Tribune reported on July 26, 1927. “Ruth proved himself a genial fellow and was glad to shake the hand of every kid who could get near him. He visited the local hospitals yesterday morning. From the time of the arrival of the New York club in this city until its departure, Ruth was the center of attraction.” Not all of the famous Murderer’s row participated in this exhibition game which may be the explanation for the 7-5 loss by the Yankees. 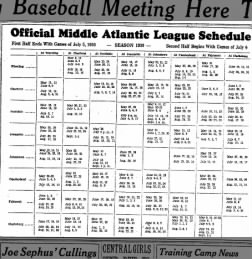 After a successful inaugural season, the league expanded from six to eight teams in 1926 as Uniontown, which lasted only one season as MAL franchise, and Jeanette joined the league. After the league operated mainly as an eight-team league until 1930, a new era would start in 1931 as four more teams were added.

Even though the league survived the first six seasons, teams struggled to stay afloat. But better days would come.