Former MLB player Lenny Randle was so kind to answer several questions in an interview. Lenny Had an extensive baseball career. He had a twelve-year MLB career, spent time with the Washington Senators AAA teams and went to Italy after his MLB career.

In 1967 Lenny had the option to sign with the St. Louis Cardinals as they offered him a $150,000 contract but his parents did not agree to sign for that amount as it felt like an insult. When Arizona State University made him an offer that included a full baseball AND football scholarship, he opted to play for the Sun Devils with whom he won the 1969 NCAA baseball title. Eventually Lenny became a member of the Sun Devils Hall of Fame, both for football and baseball.

After Lenny graduated with a science Bachelor degree, he was drafted by the Washington Senators in the first round of the 1970 amateur draft as the tenth overall draft pick. The Senators were very high on him as they sent Lenny to their AAA team, the Denver Bears of the American Association. It took Lenny a bit more than a year to break into the Major Leagues. In 1973, Lenny played with the Spokane Indians of the Pacific Coast League for the biggest part of the season. He won the 1973 Pacific Coast League title with the team. He played on a team full of future Major Leaguers like Bill Fahey, Bob Jones, Joe Lovitto, Pete Mackanin,  Ron Pruitt and Bill Madlock. 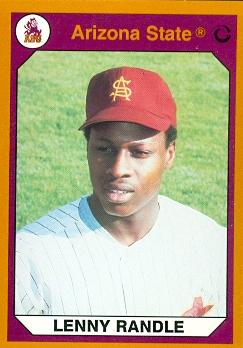 Lenny did not do much with the science degree after his active baseball life. He went into the direction of branding and marketing which he used for his worldwide sports academy. This sports academy is existing for eighteen years already. Lenny’s academy doesn’t only give baseball clinics but also teaches basketball and football. His academy has been to cities like Los Angeles (Staples Centre), Detroit, Chicago and Ontario in Canada. With his academy, Lenny has been to Italy, Japan and various other countries in the world.
As part of the Empire Pro League, Lenny is giving clinics on the Italian mainland but also in Sicily and Sardinia. He is looking to expand the independent league with teams in Puerto Rico and Italy.

With the Washington Senators, Lenny played for Ted Williams, a.k.a. the Splendid Splinter. Even though Williams had a name of being a pain in the butt, he was like a father for the players. Williams was a fighter pilot in WWII and the Korean War.
He adviced players to get their college degree. To journalists he could be a pain in the butt, especially for those who tried to dig into his private life and did not care much about baseball. The Washington Senators moved to Arlington to become the Texas Rangers. At one point, Billy Martin became the manager of the Rangers. He let a lot of former MLB stars and politicians in the club house. Richard Nixon for example, who kept score for the team in the dugout.

In his Major League career, Lenny had a couple of .300 years but also several seasons with a batting average that was much lower. Lenny explained that he and his generation were tought to play selfless, to sacrifice for the team, to play for the team. “If the manager used you to hit sac bunts or sac flies, you did that.” Many times he was told to hit the ball behind the runner so the latter could advance. If that happens thirty-fourty times per season, your average will drop. Only agents will look to numbers like this. Regular stats do not tell the whole story. Thanks to players like this, the stars could play “selfishly” and aim for the fences or hit for average.

Even though Lenny played on many MLB teams (Washington Senators, Texas Rangers, New York Mets, New York Yankees, Chicago Cubs and Seattle Mariners), there wasn’t a team he liked to play most for. He was happy to be on the field, no matter if it was in the Majors, the Minors or in Italy.

In his career, Lenny has experienced several times how the brass of a club wanted to dictate what happened on the field. The 1973 Texas Rangers for example used three

managers in one season as the results were far from good. With the Yankees George Steinbrenner used to call to the dugout phone to tell Billy Martin what to do. But Martin refused to answer the phone. According to Lenny, Billy Martin was a gentleman. Sure he intimidated the umpires and the opponent, something the Yankees did as a team back then. But despite being a bully for the umpires, Martin was a good manager for his players. In those days baseball was completely different. Would a player of an opposing team teach you how to steal home plate nowadays? Well that is what happened with Lenny as Rod Carew tought him that.

Lenny may be best known for the “ball blowing incident”. During a game in the Kingdome, vs the Kansas City Royals, Amos Otis hit a dribbler down the third base line. Pitcher Larry Andersen shouted, “Lenny do something”, so he went down at all fours and blew the ball to foul territory.

After his MLB career, Lenny went to Italy to play in the Serie A (back then the highest Italian league). He played nine years for teams like Bologna, Milan and Nettuno. Baseball in Italy had its own hooligans, who intimidated the opponent and fought the opposing fans. Back then Lenny was looking how to teach kids already. He collected players on a team with big names like Roy White, Ernie Banks, Harmon Killebrew, Joe DiMaggio, Jerry Koosman, Hank Aaron and Bobby Bonds to tour in Japan and play a Japanese All Star team and give clinics to children. Back then he already knew how to get sponsors to finance a trip like this.

As he has seen many parts of the world and learned about many religions, he wants the pope to throw out a first pitch before a game one day. Lenny sees the pope as someone who can bring people together. According to Lenny the Roman Catholic church has to change when it comes to the clergy not being married.

Lenny doesn’t really have a best memory when it comes to his baseball life. He is stil involved in baseball. He enjoys every day he wakes up and can be out on the field. With Lenny having seen much of the world and met many people, you can say that he is a rich man. Not money wise but experience wise.

I would like to thank Lenny for his time. I am feeling honored he wanted to answer my questions.