Yes, there is some ballpark news again. Not from the towns like San Antonio or Amarillo, that have been in the news for the past year and a half. No, this time it is from Windsor Colorado.

The city of Windsor announced it will start a construction of a baseball/softball complex in October. This complex will contain five high school/collegiate fields, 10 youth fields, four T-ball fields, 16 tournament baseball fields and 16 tournament softball fields, 12 multi-use fields and most of all, a 10,000 seat Feature Stadium which will be capable of housing a minor league team. Since 10,000 seaters are normally only found at AAA, barring some exceptions like the Baseball Grounds of Jacksonville, home of the AA Jacksonville Jumboshrimp (Man, do I loathe that name).

The area will take up 400 acres of land, of which 207 will be used for commercial development. The name of the facility? Rocky Mountain Sports Park.

Another fine part of this sports park will be the so-called “Miracle Field, a field for players with disabilities.

A huge indoor training facility, which can be used year round, will also be part of this complex. It will house two complete infields, six hitting lanes, six pitching lanes and other training rooms geared towards baseball and softball.

So what’s the damage of this complex? This will cost the city of Windsor a sloppy $225 million.

According to Mike Billadeau, president and director of operations for Rocky Mountain Sports Park,  “It will be the most advanced facility in the world, but with a throwback feel to it.” The stadium will be built to Major League Baseball standards, Billadeau said, and developers acknowledged that they hope to find a minor-league team to fill it.

There are not even rumors about this, but with the owners of the Colorado Springs SkySox interested to move the team, Windsor may be a premier candidate to land that AAA Pacific Coast League franchise

Shawn Logan, the director of marketing for the park, and Billadeau said they hope to hold tournaments in the complex.

Those tournaments could feed into commercial development around the park. An additional 207 acres will be available for that commercial development, said Stacy Johnson, the director of economic development for the city of Windsor. This could include hotels, shops and restaurants. “We’re looking to be an ultimate stay and play,” Logan said. 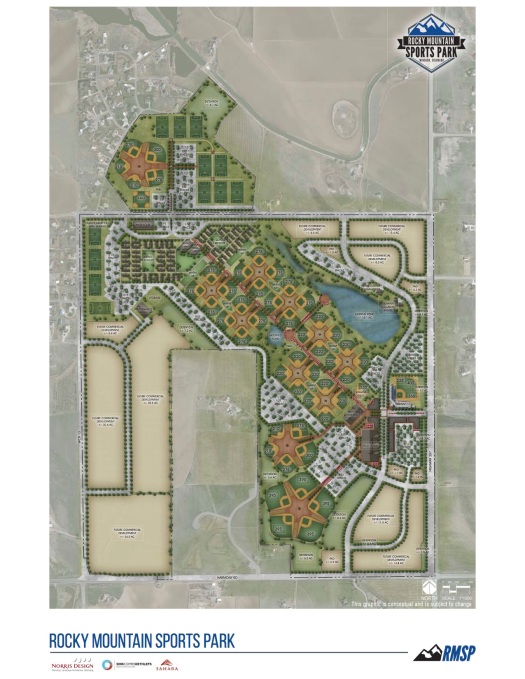 Tournaments will be held from Memorial Day to Labor Day, Logan said, and he hopes families will be able to follow the students who play in the tournaments and then spend their time and money in Windsor.

“We want them to be able to come, watch baseball, watch their team, and then enjoy great retail,” he said.

The creation of the ballpark will create over 50 full-time jobs, with additional seasonal jobs during the baseball season.

Baseball is very popular in Windsor but the city lacks the field to play. This is the main reason for the creation of this magnificent complex. According to the creators, this complex will be the largest in the world.