The first Iron and Oil League had teams in New York, Pennsylvania, West Virginia and Ohio. The league contained eight teams from Celeron NY, Franklin, New Castle, Oil City, Sharon, Titusville, Warren (all from Pennsylvania), Dennison & Uhrichsville OH and Wheeling WV.  The Sharon team moved to Celeron on July 16 to play the second half of the season there.
The league started as a six-team league but half way the season, Wheeling and Twin Cities came from the Interstate League to join the league for the second half.

The second edition of the Iron & Oil League started on May 12, 1898. The league sported six teams from Oil City, Warren, Bradford, Meadville, Celeron, and Olean.

Players in the league were played $600 per month.

One of the unique thing of this league was an all black team from Celoron called the Celeron Acme Colored Giants. The team was advertised by its owner, Harry Curtis, a white promoter, as the strongest colored club in America. But in fact, the team was 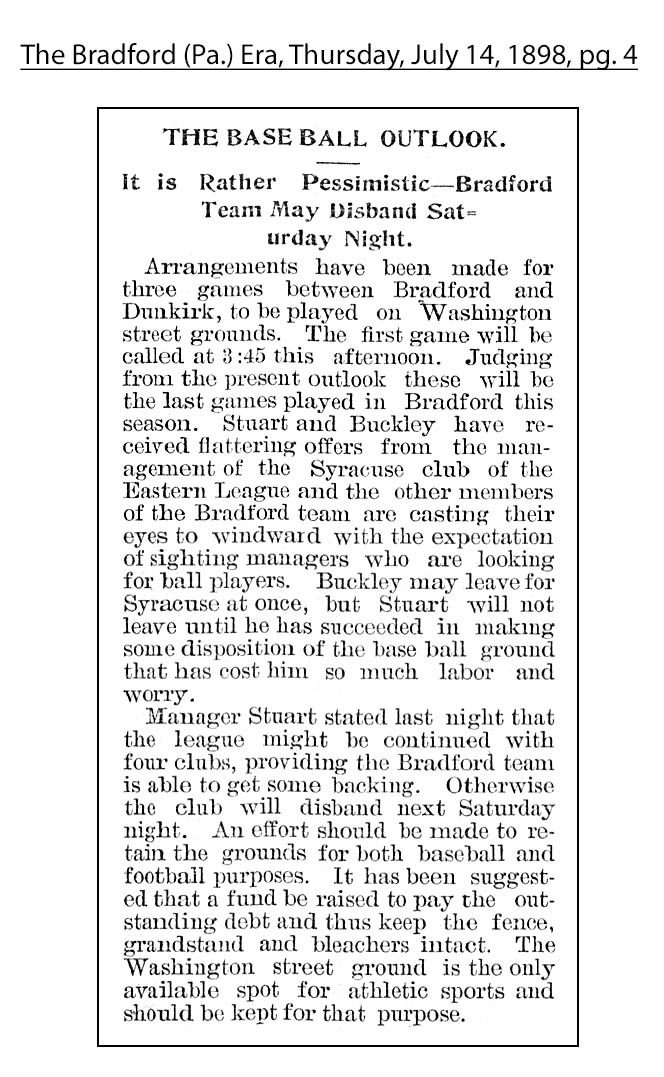 everything but strong. Bad playing and poor patronage were the reason the club disbanded on July 5 and was replaced by an all-white team for the balance of the league. The colored Giants finished with an 8-42 record and none of the players ever appeared on a major black team.
The league was far from stable as the Oil City Oilers moved to Dunkirk-Fredonia on June 18. The final blow for the league was the disbanding of the Olean franchise on July 14, causing the league to fold.

The local newspapers already wrote about the demise of the league on that day as you can read in the article on the right.

Several future big leaguers played in the Iron & Oil League: Honus Wagner, the famed shortstop of the Pittsburgh Pirates played for the Warren franchise in 1895. Jack Glasscock, who had a lengthy Major League career of 17 years, played with the Wheeling Nailers after his final game with the Washington Senators in 1895. Claude Ritchey was a team member of Honus Wagner with the Warren franchise AND with the Pittsburgh Pirates
No stats of the 1895 Iron & Oil league are available for these players.

One Reply to “Minor League history: Iron and Oil League”