Amsterdam born shortstop of the New York Yankees Didi Gregorius and former Minnesota Twins pitcher and Yankees announcer Jim Kaat will pay a visit to New Zealand. Both will have their own schedule as Kaat already arrived and Didi will arive on January 9.

“I will stage several clinics for the coaches and players and even parents if they are interested,” said Jim Kaat, who arrived in Auckland on 4th January before heading to Nelson, Christchurch and possibly two other centres to be confirmed. “The number one thing I hope to do is to encourage and motivate young people to ‘play the game.’ If New Zealand can increase the participation in baseball it will create interest from colleges and professional scouts, while at the same time it will also motivate local companies, possibly the government, and MLB International to build facilities where young people can play on regulation size fields. I think my main mission is to motivate and 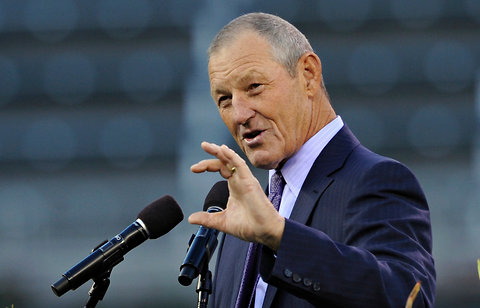 inspire New Zealanders to play the game, despite the lack of regulation facilities there. A college scholarship, a pro career or just playing in the local New Zealand leagues can be rewarding.”

Kaat, a 25-year MLB veteran, broke into the Majors with the Minnesota Twins where he played for fifteen years and appeared in one World Series vs the Dodgers in 1965. During that World Series, he had a 1-2 record with a 3.77 ERA. Next to the Twins, Kaat played for the Phillies, the Yankees, the White Sox and the Cardinals with whom he played in the 1982 World Series in which he made four appearances with a 3.86 ERA.

Didi Gregorius will arrive on January 9 and tour the country to hold clinics for the New Zealand youth. Gregorius will stay quite a while with the Kiwis starting January 9, with a visit to Christchurch on the 10th and 11th and he will head to Wellington for the night of the 15th of January, with the remainder of his time spent in Auckland till he departs on the 19th.

It took six months of negotiations for Baseball New Zealand to secure a visit by the 26-year old Yankee shortstop.

When Didi played with the Diamondbacks, he struggled at the plate as they platooned him

at shortstop with Chris Owings but both did not prosper in that situation. Next to that, Gregorius struggled against left handed pitchers.

After the Diamondbacks sent him to the Yankees he had some problems with adapting as he had to fill some big shoes after Derek Jeter left. But eventually Didi turned the tables and settled. During the 2016 season he even hit very well vs lefty pitchers. Since being traded to the Yankees from the Arizona Diamondbacks, Gregorius’ game has improved quite a bit on both sides of the plate. Known to possess a great glove and a rifle arm, he finished last season with a career high of 20 home runs and has developed into an offensive threat at the plate.