We all know the story of Abner Doubleday who would be the inventor of baseball. We also know that this story is bull… We also know that Alexander Cartwright wrote the rules of what we know now as baseball. But… In medieval times and later, people also played various kinds of baseball. This is an anthology of “baseball” through the ages.

The earliest know form of early baseball was played in ancient Egypt. At the wall of a temple in Deir et-Bahari a scene is depicted of Pharaoh Thutmose III and priests are playing a game of “seker-hemat” (“batting the ball”). The inscription dates from around 1500 BC (!). Even though bases are missing, it can be regarded as one of the forerunners of baseball. (1)

In the late eleventh century, a book named the Doomsday Book, a manuscript about daily life in 1086 England, there is a referral to a game called “bittle-battle”, which is believed to be a predecessor of stoolball. (2)

One of the earliest depicted forms of baseball in Europe is in the margins of an early fourteenth-century calendar. This calendar was part of the Ghistelles Hours, a 14th-century Flemish book of hours probably made for John III, Lord of Ghistelles, and Ingelmunster (Belgium) or his wife. No bases are depicted so it can be a version of stoolball or stump ball. These two versions of “baseball” were played with only one base. For the pitcher, the purpose of this game was to hit a stool or other object with the ball. The stool was defended by a batter as he had to try to hit the ball away. Each player stood on or near what was essentially a “base.” If the batter made contact, he was expected to run around the pitcher’s base and back to his own.  Various fielders could catch the batted ball and throw the ball at the stool while the batter is occupied running. (3) This sounds like a mix of cricket and baseball. With cricket, the pitcher (or bowler in proper cricket terms) attempts to throw over the wicket, which is defended by the batter, whose job is it to hit the ball away and run back and forth between the two wickets that are positioned on each side of the pitch.

Stoolball was played with a board-like bat that us Dutch use with another variety of the game named slagbal. The intention of that game is to hit the (tennis ball) away as far as possible and round several bases (presented by five poles) and make it back to the point where you started. If the hit ball is caught or the ball is back at the place where you started to hit, earlier than you can reach a base, you are out.

In later versions of stoolball, bases were introduced. (4)

The picture on the right, taken from the Cantigas de Santa Maria (Canticles of Holy Mary) proves that a bat and ball game was also played on the thirteenth-century Iberian Peninsula (Spain and Portugal). This canticle was created in the late thirteenth century, so this is likely the oldest depicted kind of baseball in Europe.

Another medieval picture shows monks and nuns playing a kind of baseball together.

But one needs to be careful with this one. In medieval times, a favorite joke was to take a conventional image and re-cast the parts. As monks and nuns were living strictly separated, it is highly unlikely that this picture is a depiction of reality. (5)

In one of Pieter Brueghel the Elder’s paintings (Corn Harvest), a baseball-like game is played in the background. It shows a man with a bat, runners, a fielder at a base, and spectators as well. (6)

Here is a link to the photo that you can enlarge, so you can see it yourself.

It is remarkable that many early described and depicted versions of baseball were mostly played in the fourteenth century which may lead to the conclusion that people took their game with them on their travels (trade and pilgrimages) and introduced it in other areas of Europe. It would be too much of a coincidence if, in all the areas where baseball-like games were played, people came up with a similar game themselves at the same time.

For example Oinā. It was a game similar to longball, and was first mentioned in 1364. The game stood the test of time as Spiru Haret, the minister of education decided in 1899,  that oină was to be played in schools in physical education classes. He organized the first annual oină competitions.

Longball was a game where the batter ran out to a single point or line and back, as in cricket. Another early version of “baseball” was roundball, where there was a circuit of multiple bases.

Around 1670, a game named Horne-Billets was described in Francis Willughby’s Book of Games. Part of this game were a bat and base-running, although it was played with a wooden cat (a piece of wood) rather than a ball and the multiple “bases” were holes in the ground: the batter reached safety by putting the end of his bat in a hole before the fielders could put the cat in it. This has echoes in cricket’s manner of scoring runs by touching the bat to the ground across the crease before the fielders can hit the nearby wicket with the ball. (7)

And then we come to rounders, which is believed by many to be the game that is closest to baseball. Like baseball, the object is to strike a pitched ball with a bat and then run a circuit of four bases to score. The teams also contained nine players on positions we all know with modern baseball. The name of rounders was first used in 1828 when William Clarke published the second edition of The Boy’s Own Book, which included the rules of rounders. 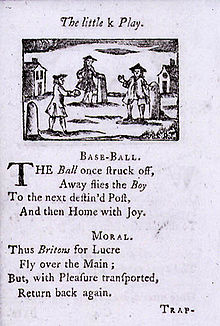 In the 18th century book “A Little Pretty Pocket-Book” (1744), the word baseball is first mentioned. It includes a woodcut of a game similar to three-base stoolball or rounders and a rhyme entitled “Base-Ball”. This is the first known instance of the word baseball in print.

The first record of a baseball game played is one in which the Prince of Wales played indoors in London in November 1748. The Prince is reported as playing “Bass-Ball” again in September 1749 in Walton-on-Thames, Surrey, against Lord Middlesex. (8)

The development of baseball in America can be traced back to rounders of course. English settlers took the game of rounders with them and it “evolved” into what is now known as baseball.

Town ball was another predecessor of our beloved game. It was played in Philadelphia and along the Ohio and Mississippi rivers. In other regions, the game was called “base”, “round ball”, “base ball”, or just “ball.” The game was similar to rounders.

One of the earliest mentions of the word baseball in America is in a by-law of 1791 in the city of Pittsfield, MA.

This by-law banned the playing of “any game of wicket, cricket, baseball, batball, football, cats, fives, or any other game played with a ball” within 80 yards of the town meeting house to prevent damage to its windows. (9)

But the earliest mention of “baseball” dates back to March 1786. In his diary, Princeton student John Rhea Smith stated: “A fine day, play baste ball in the campus but am beaten for I miss both catching and striking the ball.”(10)

This all makes clear that baseball wasn’t just invented. The sport has evolved from games that date back hundreds of years even as far back as the old pharaohs of Egypt.