As all the baseball fans of the Dutch Kingdom (Aruba, Bonaire, Curaçao, Saba, St. Eustace, St. Martin and The Netherlands) will know, there are two players (Wladimir Balentien and Rick van den Hurk) from the Dutch Kingdom playing in Japan for a couple of years now. For the first time, they are playing on one team: the Fukuoka SoftBank Hawks. This thread will pay attention to their performance during the 2020 season.

Starting pitcher Higashihama and four relievers kept the Nippon Ham Fighters limited to one run on six hits as they cruised through nine innings for the 4-1 win. 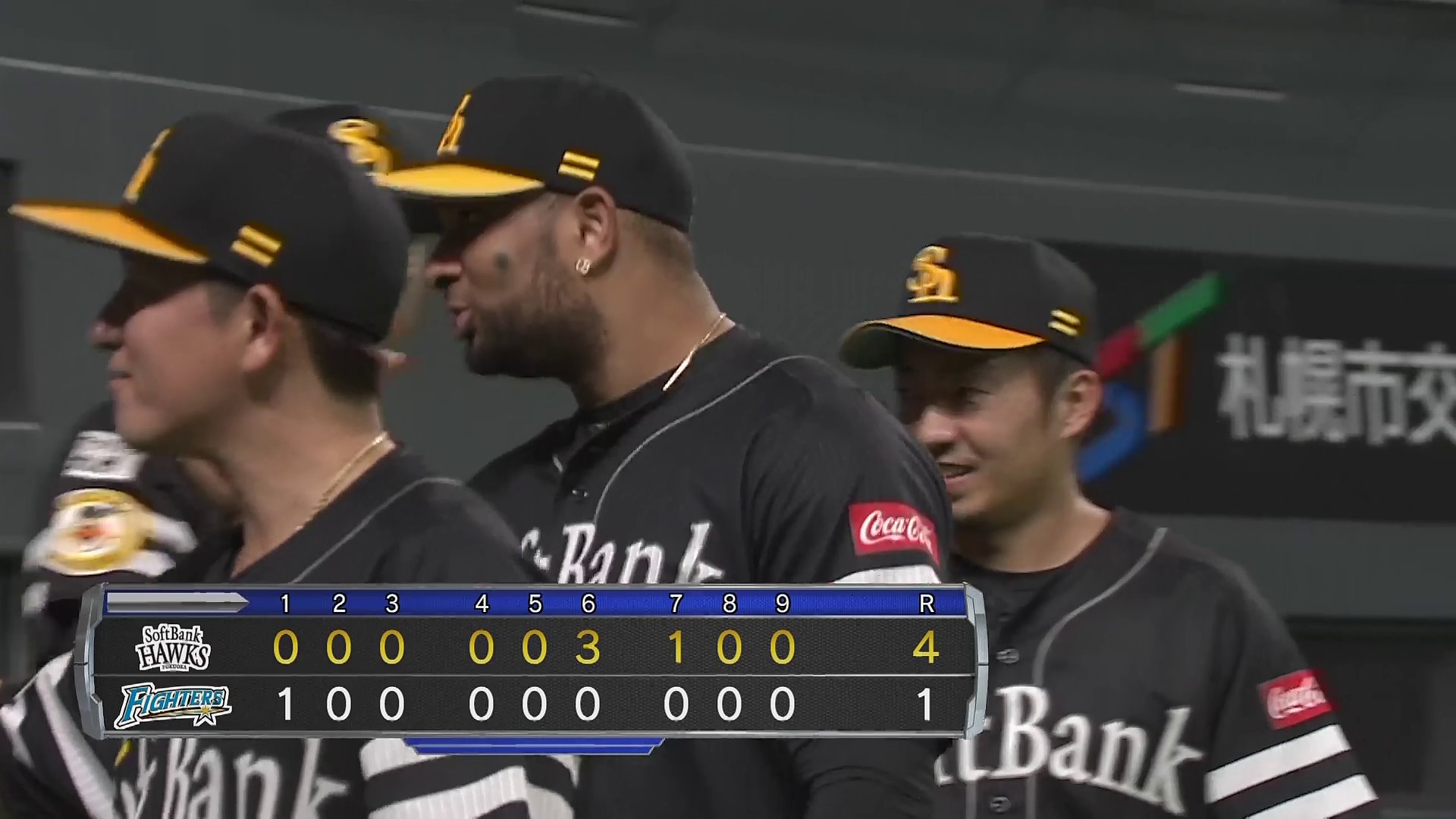 Wladimir Balentien (center of the photo) contributed in a big way. In the top of the sixth inning, he hit a two-run home run to left center field, to give the SoftBank Hawks a 3-1 lead. It was his third dinger in two days.

In the top of the eighth inning, Balentien hit a high ball that appeared to be an easy out for the left fielder of the Fighters. But the ball hit the ceiling of the Sapporo Dome so it ended up in a ground rule double. Wladimir ended the game going 2 for 4.

Here is the summary of the game with the ground rule double hit by Wladimir Balentien at 2:26.

Rick van den Hurk’s outing was not as good as his previous one but it was good enough to keep the SoftBank Hawks in the game. In five innings, Rick gave up five earned runs on seven hits and two walks as he struck out three.
Just like in Van den Hurk’s previous start, Wladimir Balentien, who is still struggling at the plate, contributed big time as he hit a three-run home run in the first inning and a two-run home run in the seventh. Wladimir went 2 for 3 as he also drew a walk in the fifth inning.
Here is Balentien’s first homer of the game.

Here is his second.

Unfortunately, closer Yuito Mori blew the save and denied Van den Hurk the win as he walked the first batter in the ninth, gave up a single to the second and then recorded two outs himself as he fielded a sac bunt and threw out a runner at third base and when he took over when Kotaro Kiyomiya hit a dribbler towards the first baseman. But with runners in scoring position, Mori gave up a walk off double to Yuki Nomura who drove the ball against the center field wall to drive in two runs for the 9-8 win.

The Dutchies put their mark on this game vs the Seibu Lions.
Rick van den Hurk started today’s game. In a very solid outing he was on course to pitch a perfect game for seven innings. But in the eighth frame, Yamakawa singled and advanced to third on a double by Nakamura. Then Rick threw a wild pitch that allowed Yamakawa to put Seibu on the board.  That was the point when Rick van den Hurk was replaced. His successor Livan Moneiro gave up another hit that drove in a run that Rick was tabbed for.
Wladimir Balentien contributed with two solo home runs, going 2 for 4.
Eventually, the SoftBank Hawks added an insurance run on a double by Matsuda.
Yori Muito entered the game in the top of the ninth and retired the three batters he faced for the save, giving the Hawks the 4-2 victory.
With this win, Rick van den Hurk is now tied for second place for the most wins by a foreign pitcher of the SoftBank Hawks with 42 victories. Joe Stanka has the most with 94 victories.

Here is are the two home runs of Wladimir Balentien:

And here is the outing of Rick van den Hurk:

In a high scoring game, the SoftBank Hawks stayed at the right side of the score. In the first inning the Hawks scored four runs but the Seibu Lions bounced back with three runs in the bottom of the same inning. In the third the Lions tied the game and in the fourth, they took a two run lead. But there the Lions’ run production stalled. The Hawks on the other hand started to produce runs from the sixth inning. In the sixth inning, they scored three runs and added two more in the final two innings to beat the Lions 9-6.
Wladimir Balentien went 1 for 4 with a double and an RBI on a sac fly to right field.
Tomorrow, the SoftBank Hawks will take on the Seibu Lions again. Starting pitcher for the Hawks will be Dutchie Rick van den Hurk.

Here is a summary of today’s game:

The SoftBank Hawks are coming of a slow start. After the team won the opening game of the season, it fell to the Hanshin Tigers twice. Also today, the team did not manage to win. The Seibu Lions were too strong and beat them 11-3.
Matt Moore, who used to be a promising pitcher for the Tampa Bay Rays and who was the first pitcher to throw a no-hitter for the Rays’ AA Farm team Montgomery Biscuits, lasted only four innings in which he surrendered six runs of which two earned. The bullpen also did not help as the relievers gave up  five more runs.

Wladimir Balentien went 0 for 3, striking out twice as he drew a walk in the sixth inning.

Here is a summary of today’s game:

As tomorrow will be the fifth game of the season, it would be his turn tomorrow as it was in the past years. But currently, his name is not on the 30 man roster so likely someone else will take the mound.

Tough loss for the SoftBank Hawks. Despite getting more hits than the Chiba Lotte Marines, the Hawks lost 5-1. The sole run that the Hawks scored, came in the second inning when Yuya Hasegawa scored from second base on a Nobuhiro Matsuda’s grounder up the middle.
Wladimir Balentien collected one single in four at-bats. In the bottom of the fifth he hit a ground ball single to left field that did not have any impact on the score. Wladimir also drew a walk in the seventh inning. On the defensive side, Wladimir recorded three flyouts in center field.

Here is a summary of today’s game

On Opening Day, the SoftBank Hawks clinched a win vs the Chiba Lotte Marines. In this 2-1 win, Curaçao’s Wladimir Balentien went 0 for 4. Today was another close event as the SoftBank Hawks fell to the Chiba Lotte Marines 2-3. In his first at-bat, Wladimir Balentien lined out to third base, leaving a runner in scoring position behind. In the third inning, Balentien got his first hit of the season when he lined to right field, which allowed Yuki Yanagita to advance to second base. After Yanagita hit a solo home run to tie the game at one in the sixth, Balentien collected his second hit of the season with a groundball up the middle.
The Marines scored twice in the eighth frame which was enough for the win as the Hawks only scored once in the bottom of that ininng to fall to the Marines.
Wladimir Balentien is now 2 for 8 for the season.

Here is the condensed game

Tomorrow, the third game of this series in Fukuoka’s Pay Pay Dome. The game will start at 14:00 (2:00 PM) local time. On Monday, no games are played in Japan. Tuesday the Hawks will face the Saitama Seibu Lions in Tokorozawa, about 20 km northwest of Tokyo.