In today’s episode of “Baseball Related Songs,” we pay attention to “My oh my” performed by Macklemore & Ryan Lewis. The song is about the magical year 1995 in which the Seattle Mariners made it to the ALCS after beating the Yankees in the ALDS.

Macklemore is the stage name of Benjamin Hammond Haggerty, a rapper and songwriter from Seattle. He was born in 1983.

At the age of six, he heard his first rap song by Digital Underground. At the age of fifteen, he started to write lyrics. When he started to sing he was influenced by a lot of underground East Coast rap groups like Wu-Tang Clan. He was a part of a program focusing on education and cultural identity called “Gateways for Incarcerated Youth” as he was interested in reaching a younger public. With Gateways for Incarcerated Youth, he provided music workshops. 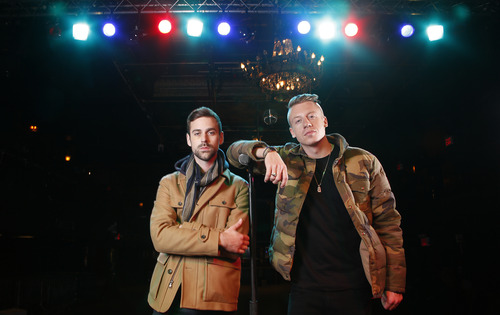 The song “My oh my” is dedicated to sportscaster Dave Niehaus, who died in 2010. In 2011, Macklemore did so during a performance on Opening Day at Safeco Field, home of the Seattle Mariners. Niehaus was the leading play-by-play announcer of the Seattle Mariners from their inaugural year (1977) until his death. Following the performance, Macklemore and Ryan Lewis were each awarded a custom jersey embedded with a Mariners patch. Ryan Lewis announced that all proceeds from the song benefit the Rainier Vista Boys and Girls Club. The video that comes with the song is produced by Ryan Lewis.

When it comes to sports, Macklemore is a big fan of the other Seattle sports teams, the Seattle Seahawks (NFL) and the Seattle Sounders FC (MLS). He is the co-owner of the latter team.

The lyrics of “My oh my” are as follows:

I used to sit with my dad in the garage
That sawdust, that Pinesol, and the moss
Around every spring, when the winter thawed
We’d huddle around the radio, twist the broken knob
710 AM, no KJR. Dave Niehaus’ voice would echo throughout the yard
Couldn’t have been older than 10
But to me and my friends
The voice on the other end might as well have been God’s
1995, the Division Series
Edgar’s up to bat
Bottom of the 11th inning
Got the whole town listening
“Swung on and belted,” the words distorted. “Joey Cora rounds third!
Here comes Griffey! The throw to the plate’s not in time!
My, oh my, the Mariners win it!”
Yes. Fireworks, they lit up that ceiling in the Kingdome
We had just made history

“Swung on and lined down the left-field line for a base hit! Here comes Joey! Here comes Junior to third base! They’re gonna wave him in! The throw to the plate will be… late! The Mariners are going to play for the American League Championship! I don’t believe it! It just continues! My, oh my!”

Laces woven, barely holdin’ that stitch
The creases of time amongst the grime and the grit
Where the leather he used to pound his fists
To some, it’s just a mitt, but see that glove was him
Yep, tell me stories on the field, with that sun-stained brim
Blood under my chin, he taught me how to spit
Sunflower seeds back with me and my crew
Sunburnt arms
Big League Chew
Yeah we were like, The Sandlot after dinner
After practice, we’d listen
To the M’s in the kitchen
And if mom wasn’t trippin’
“Come on dad! Please, I swear, just one more inning!”
Voice went “pump, pump!” through the system
“Break out the rye bread! It’s grand salami time!”
“My, oh my! Another victory!”
Yes. My city, my city
Childhood, my life watchin’ Griffey right under those lights