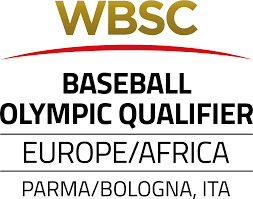 On the first day of the Olympic Qualifier, the Kingdom of the Netherlands hosted the Czech Republic, South Africa “hosted” Italy and Israel took on Spain.

Only the winner of this tournament will qualify directly for the 2020 Olympics. If the Kingdom of the Netherlands would not qualify in this tournament, it cannot clinch an Olympic ticket through the Premier12 tournament as the WBSC had the brilliant idea that that would only be for countries from the American and Asian continent and for countries from Oceania. The final shot for the runners up from the qualifying tournaments will be held in Taiwan early 2020.

(suspended due to inclement weather
Alessandro Maestri should be the man who would have kept South Africa at bay. But things went a bit different today as Maestri gave up four runs to South Africa.
The Italians must have been totally flabbergasted when South Africa took a 3-0 lead in the bottom of the first inning. With the bases loaded and two outs, Brandon Bouillon was hit by a pitch so all runners moved up a base and Jonathan Phillips scored the opening run. Hein Robb followed with a single through the right side and drove in two more runs.
But this lead would not last long as Italy bounced back in the top of the second inning on four consecutive singles that drove in three runs.
With a single to left field, Jonathan Phillips drove in Benjamin Smith for the go-ahead run. But once more Italy managed to tie the game on Alberto Mineo’s homer to right center field in the top of the fourth inning. In the following inning, neither team would get close to scoring a run. In the sixth, Alberto Mineo struck out and then the game was called due to inclement weather.
For now it is not known yet when the game will continue.

The game between Israel and Spain was the story of Joseph Wagman. The Californian, who pitched in the independent American Association in the past two seasons, was practically unhittable. He pitched a complete game in which he gave up only three hits and struck out eight.
Israel took an early 2-0 lead when Daniel Valencia homered to left field and took Blake Gailen with him.
In the top of the fifth, Daniel Valencia also took care of the third run batted in as he drove the ball to right field, where it was caught for a sac fly on which Zachary Penprase could score Israel’s third run.
Joseph Wagman earned the win and Zachary Penprase was the best hitter for Israel as he went 2 for 4 with a run scored.