Ever since the Dohren Wild Farmers are back in the German highest league, the First Bundesliga, I have been intrigued with this club. How can a club from a tiny village be this competitive? Luckily, the club’s press spokeswoman provided a lot of information and a link to the history part of the club’s website. Data that laid the foundation for this blog post.

Impressed by the movie Major League, several youngsters in the little village of Dohren (near Hamburg) tried to play the game of baseball in 1990. First with wooden bats and motor helmets. Eventually, they established a baseball branch inside the SV Dohren (Sports Club Dohren). Already in 1991, a team could start playing games in the lower leagues of German baseball. As the team was pretty successful, one year later a softball team and a youth team were founded.

The flagship team earned a promotion to the “Verbandsliga Hamburg”, a fourth tier league. After some ups and downs, some relegation and promotion, the club eventually made it to the second Bundesliga in 2004. Also in the area of youth teams, the Wild Farmers went out there and made some noise as the club had teams at every youth level. Also, a girls softball team was founded. Some youth players of the club made a lasting impression at the DBA = Deutsche Baseball Akademie (German Baseball Academy).

The goal for the 2010 season was “Klassenerhalt” or in proper English, to stay in the highest division. Even though the Wild Farmers ended in the lower half of the standings of the North Division, the team managed to survive the playdowns. The next year had a similar scenario but in 2011, the team managed to clinch a spot for the 2012 season much earlier.

The 2012 season was not as successful as the club demoted. But as no Second Bundesliga club wanted to be promoted, the Wild Farmers were allowed to stay at the highest level of German baseball. Eventually, in 2014, the club went down to the Second Bundesliga. Their stay in the second highest baseball league in Germany would last for two years. In 2016 the club earned the promotion again.

In contrast to one would expect, the Wild Farmers managed to finish in second place in the First Bundesliga North. This resulted in a playoff series against the reigning champion Mainz Athletics who beat the Wild Farmers 3-0. But the 2017 season brought a lot of changes. First of all the number of fans that came to watch a game. In previous years, only 50-100 fans passed the turnstiles. But thanks to a promotional campaign “Success makes sexy” and several themed days, the club managed to lure an average of 300+ fans to their games.

The 2018 season was nearly as successful as 2017. The Wild Farmers made it to the extra round that was established by the DBV (German Baseball Federation) to let the teams play more games. In this extra round, the Wild Farmers only won one game but for the second year in a row, the team was not destined to play in the playdowns.

A strong promotion on social media and towards the local German press gives the club a lot of attention. And as a result of this attention, the club has gotten more fans and more sponsors.

According to Kirsten Dallman, the press spokeswoman, the flagship team of the Wild Farmers is a good mix of homegrown German players and several foreign imports. Many of the players know each other since Kindergarten, so next to being teammates they are also friends. The players are very motivated as they train thrice a week. 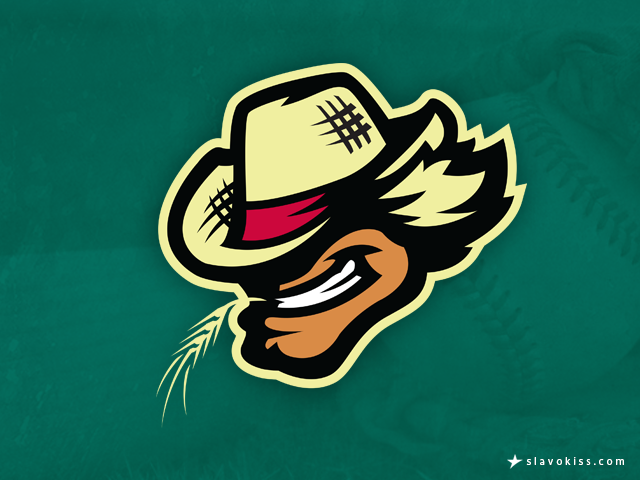 in 2017 and we managed to keep up the euphoria. Because of the competition in the team, there is a big intensity during training sessions. We think last year many secretly laughed at us and many thought we would be a mayfly but since we made the playoffs again this year, we draw attention in Germany and apparently even in Europe.”

A sign of what a special club the Wild Farmers is was the BBQ after the last game of their 2018 season to which the opponent, the Solingen Alligators, and the umpires were invited as well.

Currently, the club has 95 members; 45 youth members and 50 adult baseball players. The club has three adult baseball teams and a team in each of the three youth categories.  On a population of 1221, nearly eight percent of the village is playing baseball or softball. As the team averages 300 fans per game, it means that about twenty-five percent of the population of Dohren is attending the Wild Farmers’ games.

A big thank you goes out to the Dallmann family who provided plenty of information which made it possible to write this blog post. Also, thank you to NG Editing for allowing to use the video.