In this episode of Ballparks around the World, we pay attention to the oldest baseball stadium in the Netherlands: the Pim Mulier Stadium.

After the plans were ready, the construction started on January 25, 1963, and it took the contractors only a bit longer than four months to complete the construction. The stadium was named after Pim Mulier, a Dutch sports pioneer. He is regarded as the founder of modern Dutch sports.  Currently, the ballpark has a capacity of 4,500 but the seating can be expanded during tournaments like the Haarlem Baseball Week. The dimensions of the playing surface are:

Next to being the home of the Haarlem Baseball Week, the Pim Mulier Stadium would become the home of the merger club Haarlem Nicols (a merger between EDO and EHS).
Both clubs, EDO and EHS were struggling to stay alive, even though EHS had won the Dutch championship in 1962. Driving force behind this merger was Gé Hoogenbos, who was also the initiator of the construction of the Pim Mulier Stadium. He was a baseball enthusiast who was able to gather a lot of followers if he had a vision about something.
Haarlem Nicols would be the leading club for years to come. The club clinched Dutch championships in 1965, 1968, 1970, 1975, 1976, 1977, 1982, 1983, 1984, 1985, 1988 and 1989. Eventually, Haarlem Nicols paid the price for spending big on players year after year. In 1994, the club was declared bankrupt.

After the demise of Haarlem Nicols, the stadium was only used for the Haarlem Baseball week every other year. But eventually, in 2009, the ballpark got a main tenant again as Honk- en Softbalvereniging Kinheim called it home as it outgrew its former location (Kinheim is one of the biggest baseball clubs in the Netherlands).

When Kinheim became the main tenant, the stadium got a complete upgrade. Next to the ballpark, an indoor training facility and adjacent baseball and softball fields were erected. But next to being home to Kinheim, the main reason for the upgrades was the upcoming World Championship that was about to be played at the ballpark. The facelift was needed for organizing international tournaments like the World championship.

After the 2016 season, Kinheim decided to withdraw from the hoofdklasse. In the transition period, all players had left and the club wasn’t able to get anyone in return.
The KNBSB granted the request to play in the overgangsklasse (one level below the hoofdklasse), where the club would play with players from its farm team and youth players. So even though no hoofdklasse baseball is played there anymore, the Pim Mulier Stadium still has a tenant and baseball is played there every week. 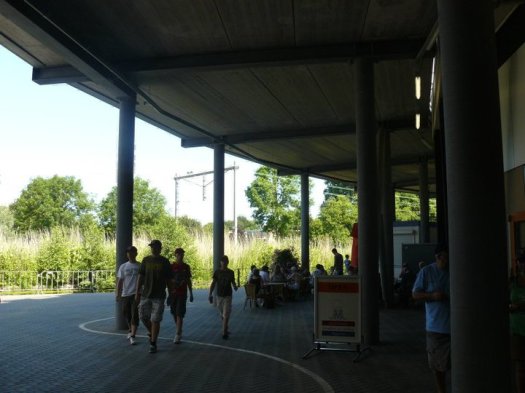 The Pim Mulier Stadium is very well maintained. It is hard to imagine this ballpark will celebrate its 55th anniversary in June. In the USA, this age would be a reason to demolish it and replace it with something new.