The two students who are in their third year studying for master’s degrees in architecture presented their conceptual ideas for how a PawSox stadium might fit in the city at the Apex department store site, last Friday.

As the city of Pawtucket invited them and so, under the guidance of professors Alan Plattus and Andrei Harwell and visiting professor Janet Marie Smith, the two developed a design for a new ballpark at the current Apex site. Janet Marie Smith is a nationwide known ballpark architect. 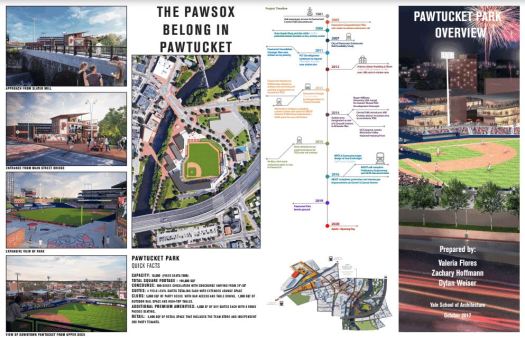 PawSox Chairman Larry Lucchino said the team has met previously with the students: “We intend to use a lot of their ideas,” Lucchino said. “Remember: Janet Marie Smith has been working with them for weeks.”

In their presentation, the two students made clear there is a strong connection to the riverfront from the Apex site.

It was stated that other Yale students also worked on designs for two other non-Rhode Island sites for a PawSox ballpark. This proves, there are still more cities in the running to get the AAA Red Sox farm club of the International League.

Currently, the PawSox are still looking for support for a new ballpark. Even though the club and the state of Rhode Island have said the ballpark will pay for itself over time, critics have questioned the use of taxpayer money for a privately-owned sports team.

In general, the comments on the presentation were positive but property owners and developers expressed concerns about noise and traffic, but according to the students, noise of the adjacent I-95 and the urban setting of the ballpark make noise on game nights less of a concern.

Just like Fenway Park, home of the PawSox’ parent team, the Apex location is an enclosed area. But that is about the only similarity between the location in Boston and in Pawtucket. The students stated they wanted to respond to the characteristics of the Pawtucket site. They focused on opening the stadium up to the riverfront to emphasize the natural beauty and recreational opportunities of a riverfront park, and pay homage to the city’s industrial history, such as the nearby Slater Mill Historic Site.