Some of the older readers may remember him. Bob Ross. The painter with his own TV show in which he painted landscapes with just a few brushstrokes (happy little trees). The Daytona Tortugas (A-Advanced Affiliate of the Cincinnati Reds in the Florida State League) will have a Bob Ross night in order to honor the late painter from Daytona Beach. 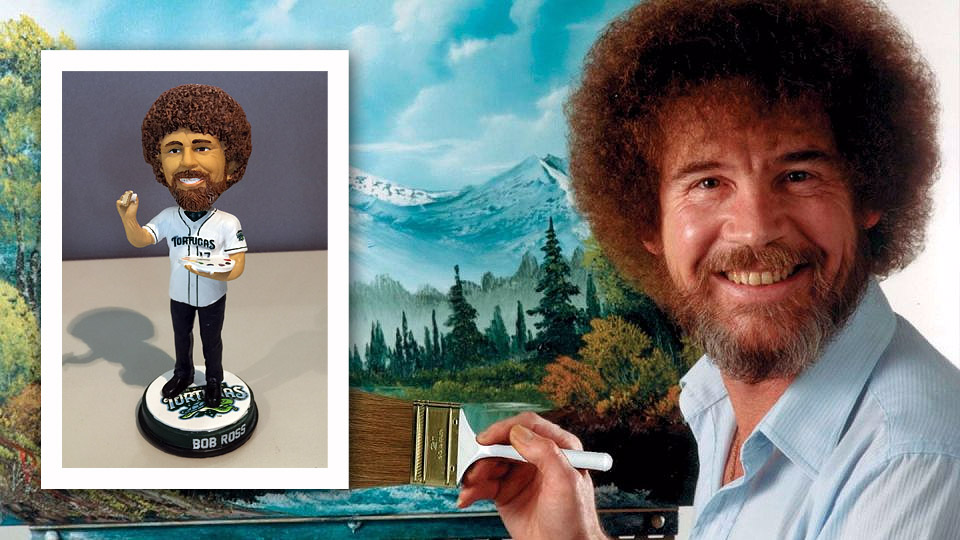 The Tortugas will celebrate the life of Bob Ross with the first ever Bob Ross Bobblehead this Saturday. Bob Ross was born in Daytona Beach and spent most of his life in Volusia County and lived in nearby New Smyrna Beach at the time of his passing.

The day is packed with entertainment as it starts with a Happy Little Fun Run (5K) around Jacky Robinson Ballpark that will start at 9.00 AM. The run will feature canvases along the course for runners to stop and paint on.

The celebration will go on with pregame painting classes, led by seven Bob Ross certified painters in Bob Ross themed-wigs at Jackie Robinson Ballpark in the early afternoon. The painting class begins at 5 PM and is already sold out.

The gates of the ballpark will open at 6.00 PM and the first 1,000 fans that pass the turn styles will be given a Bob Ross bobblehead. The Tortugas will also host a “Happy Little Tree” dedication in his honor as Daytona will plant a tree.

If that is not enough yet, there will be life-size Bob Ross cutouts, large canvas for the fans to enjoy, Bob Ross t-shirts and DVD’s, and a Bob Ross Look-a-Like Contest for fans to participate in. First pitch is scheduled at 7:05 PM against the Clearwater Threshers.

“It’s been a whirlwind,” said Tortugas president Ryan Keur. “We reached out to Bob Ross’ foundation [Bob Ross Incorporated], and they were so excited. They gave us permission to use Bob Ross’ name and do the bobblehead. They’ve played an integral role in all the little pieces, transforming this into a full day of Bob Ross activities.”