Last night, Dutch pitcher Tom de Blok debuted as a starting pitcher with the Connecticut Tigers. The parent club from Detroit think Tom, who used to be a reliever/closer in the Dutch leagues, can be converted into a starter. 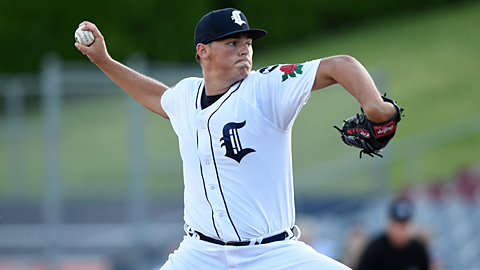 of the C-Tigers vs the Aberdeen Ironbirds in the A-Short Season New York – Penn League.

Since his debut with the West Michigan WhiteCaps in the Midwest League, a few weeks ago, Tom showed he could work his way through multiple innings easily. In eleven outings he pitched 16.2 innings in which he gave up three runs on eleven hits, walked four and struck out ten. This made the parent club believe Tom could become a starting pitcher.

It is clear Tom’s arm must get used to throwing long sessions, so the Tigers let him pitch 3.2 innings last night. Of the thirteen hitters he faced, he retired five on strikeouts, four on groundouts and two on flyouts. Tom gave up only one hit and one walk.

Of course, he did not pitch enough innings for the win but he can look back on a very good debut as a starting pitcher, even though it was only at A-Short Season level.

The Tigers beat the Ironbirds (Baltimore Orioles). 6-3. Kirvin Moesquit made an appearance as pinch runner, his first appearance in a game this season, for the Ironbirds. In one at bat the Curaçaoan infielder grounded out 4-3.