German Bundesliga club, the Bad Homburg Hornets have acquired a pitcher from Aruba. Former Los Angeles Dodgers and Baltimore Orioles farmhand Wally Vrolijk will play for the german team in 2017. 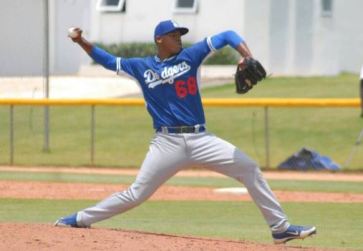 in 2015 as he played in the Dominican Summer League for the Los Angeles Dodgers organization. In eighteen appearances, Wally posted a 1-2 record with a 6.04 ERA. One year later Wally played in the DSL as well but this time with the Baltimore Orioles. This time he did a lot better as he posted a 2-2 record with an ERA of 3.05.

Apparently, the Orioles were not impressed because they released him on November 3 last year.

Now he will head to Germany to reinforce the Hornets. With that team, he will play as a pitcher but he will also do some DH duties.

The Bad Homburg Hornets ended in the lower half of the standings in the Erste Bundesliga South, but survived the play downs and stayed in the highest German baseball league.