There was a time, especially in the fifties, sixties, seventies and eighties, when minor league affiliates were just named after their parent club. Even nowadays there are still quite some teams that are named after their name sake. Take the Braves’ farm teams for example. 90% of them is called Braves as well. Sure it helps that the Braves own most of these teams, but it lacks creativity for sure.

From the 1990s, minor league teams started to adopt an own identity with names that could be linked to the city or the region they were located at. Take the Lynchburg HillCats. The name refers to the hills that surrounds the city of Lynchburg. But nevertheless the name HillCats is totally made up as there is not such a species as a hill cat.

In the new century a lot of teams were established or moved and had to think of a new name. Take the Montgomery Biscuits for example. After the 2003 season the Orlando Rays moved into brand new Riverwalk Stadium in Montgomery. The team opted for the name Biscuits. Not only because it is a typical snack from the South but also due to the marketing potential of the name. Many thought it was a lame name but IMHO the name is quirky.

Another fine example of a name that has a fine link to the area where the team is located is the Chihuahuas. This team from El Paso has named itself after a dog breed that comes from the area originally. Personally I am not too fond of the name but at least it is not over the top.

organized a name the team contest in 2013. An overwhelming majority wanted to keep the name Aeros but nevertheless the owner, Ken Babby, changed the name of the club into RubberDucks. He claimed that the name referred to the rubber and tyre industry of the area. When it came time to choose a new moniker, the franchise formerly known as the Akron Aeros wanted to satisfy two main criteria. The name had to reflect both the working-class tenacity that Akron is known for as well as the team’s commitment to fun and family entertainment. Many fans objected to the name change but nevertheless the owner moved on with it. Of course it is a matter of taste, but personally I think that RubberDucks isn’t that bad at all.

The last two weeks several clubs came up with a new name, caused by a move or just as part of a rebranding. The Florida State League’s newest name is the Florida Fire Frogs from Kissimmee. One of the two new teams in the Carolina League, the A Advanced franchise of

the Texas Rangers in Kinston NC, came up with a new name: the Down East Wood Ducks. The name is not spectacular but at least it refers to a species of ducks that lives in the area.
Two days ago the Jacksonville Suns came up with a new name out of the blue. Owner Ken Babby (I have heard that name before) announced that the team had adopted the name Jumbo Shrimp…. This is a fine example of a name that is totally over the top.
Someone started a petition to get the moniker Jacksonville Suns back. 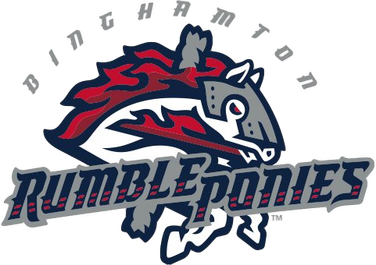 The latest example of a name that is over the top, was revealed yesterday, when the AA franchise of the New York Mets, the Binghamton Mets presented their new name and logos: the Rumbling Ponies…. According to the owner the name refers to Binghamton being the carousel capital of the world.
The introduction article on milb.com stated: Rumble Ponies are a “fierce horse that no carousel can contain.”
Not only the name is far fetched, also the explanation to whitewash the name.

I read a very fitting comment about the creation of these new names: “Do they put names in two different hats blind fold themselves and draw from those hats and then run with it?”

It starts to look like a trend. The more extreme a name is, the better. The second new team in the Carolina League, the Astros affiliate in Fayetteville still has to pick a name. Let’s hope it is not as extreme as Rumble Ponies or Jumbo Shrimp.