The Texas Rangers and the Spokane Indians (A Short Season, Northwest League) have extended their player development contract with two more years through the 2018 season.

The cooperation between the two clubs started in 2003. Since the two clubs became partners the Indians have won three Northwest League titles. One in the inaugural year of their cooperation, and two others in 2005 and 2008.

Traditionally both clubs exchanged pleasantries. Indians GM Chris Duff led off: “We are happy to extend our relationship with the Texas Rangers. The last 14 years have been some of the most successful in team history and we look forward to what the future holds for both the Indians and the Rangers.”

Since 2003, 67 former Spokane Indians have made it to the Bigs. Some well known names are Ian Kinsler, Odubel Herrera, Rougned Odor, Neftali Perez and Jurickson Profar. Also Jurickson’s younger brother Juremi played for the Spokane Indians.

Mike Daly, Senior Director of Minor League Operations for Texas stated: “We are excited to continue our partnership with the Spokane Indians. We consider ourselves fortunate to have the future of the Rangers developing in front of the big crowds and great facilities in Spokane and we’re proud of our relationship with the community.”

When the new PDC will end in 2018, the cooperation will have surpassed that one between the Dodgers and the Northwest League franchise. The Dodgers called the Spokane club their AAA affiliation from 1958 through 1972 (15 years). At the end of the 2018 season, it will be 16 years that the Rangers and the Indians are linked to each other.

The team has a rather unique relationship with the Spokane People. The team sports a jersey with the name Spokane on it in their Salish language. Even some signs in their ballpark (Avista Stadium) are written in the Salish language. 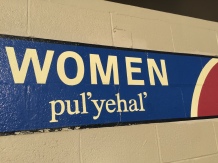 Jersey and sign in the Salish language (photo on the right: courtesy of Ben’s Bizblog)