After a few short episodes, this time a rather long one. In this epidose of  “Summing up the Dutchies per MLB organization”:

Kenley Jansen:
Kenley was signed by the Dodgers in 2005 as an undrafted free agent. In the first two years of his career he played for the Gulf Coast League Dodgers. In 2007 he was promoted to the Great Lakes Loons (A Full Season, Midwest League) but later in the year he was sent down Ogden (advanced Rookie, Pioneer League). We have to keep in mind that in his first years in the Dodgers organization, the now 27-year old Curacaoan, played as a catcher. All of the 2008 season he played with the Great Lake Loons. After he participated as a catcher with the Dutch team in the 2009 WBC, in which the Dutch ousted the Dominican Republic, he was promoted to A Advanced Inland Empire 66ers. With that club the Dodgers started experimenting to use him as a relief pitcher. After the season he played in the Arizona Fall League. It seemed that the Dodgers had an awful lot of faith in him as they placed him on the 40-man roster to be protected for the Rule-5 draft.
In 2010 he played for the AA Southern League’s Chattanooga Lookouts and participated in the All Star Game of that 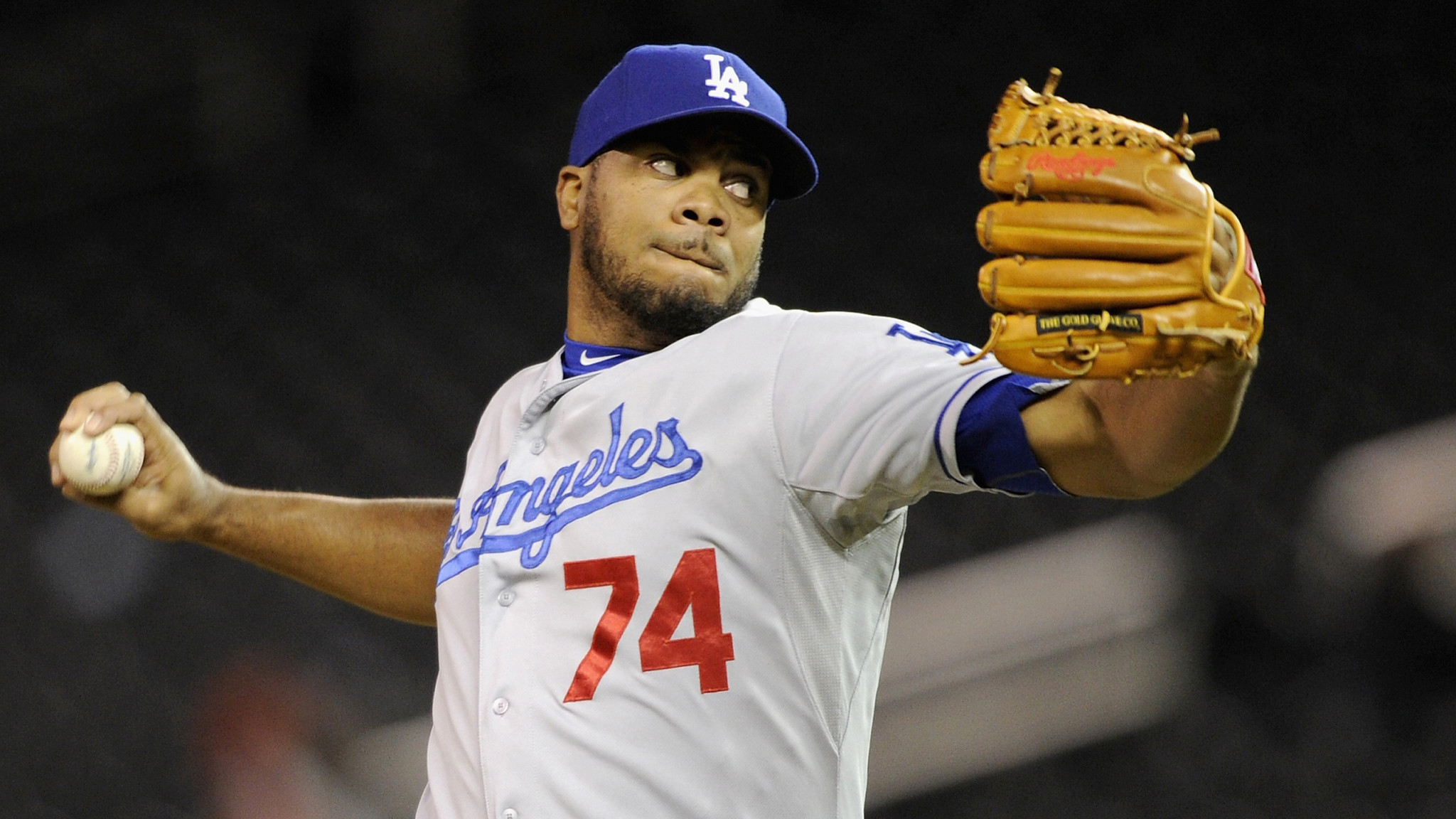 league. On july 23, the Dodgers called him up from AA and he debuted one day later vs the Mets. He pitched one scoreless inning in which he retired the side. The next day he recorded his first Major League save as he retired the side again.
In 2011 he started the season in Los Angeles but was sent down to AA Chattanoog on May 4 and even down to A Advanced Rancho Cucamonga on August 21. On August 24 he returned to the Dodgers roster and became a key member of the Dodgers’ bullpen. In 2012 he took over the closer role from Javy Guerra struggled. But later that year he ended up on the DL because of heart problems.
In 2013 Kenley was first used as a set up man but soon enough he took over the role of closer from Brandon League, who struggled in that role.
Since joining the Dodgers his ERA has been hovering between 3.00 and 2.00. Two exceptions: In his first season his ERA was a microscopic .067 and in 2013 it was 1.88. His career ERA stands at 2.39. He has clinched 129 saves in 147 opportunities. His career Strikeout-Walk ratio stands at 4.86 (505/104).

Shawn Zarraga:
This 26-year old catcher from Aruba was signed in 2007 by the Milwaukee Brewers. After spending the 2008 season with the AZL Brewers, he was promoted to A Full Season Wisconsin Timber Rattlers of the Midwest Leasgue. But at the end of June he was sent down to Advanced Rookie Helena of the Pioneer League. In 2010, 2011 and 2012 he played for the A

Advanced Brevard County Manatees in the Florida State League. With that club he batted near .300.
After spending the entire 2014 seaon with the Huntsville Stars in the AA Southern League, he split the 2015 season with the Stars and the Memphis Sounds (AAA International League). But after he batted .213 with the Sounds he was sent down to Huntsville again. With Huntsville he hit a staggering .330. Shawn ended the season with playing in the Arizona Fall League where he played for the Glenndale Desert Dogs and hit .355. He was one of the two Dutchies that participated in the AFL. The other was catcher Spencer Kieboom (Washington Nationals).
On December 18 2014 the Dodgers acquired Zarraga in a trade. He was placed on the roster of the Tulsa Drillers of the AA Texas League. In 44 games and 119 at bats, Shawn hit .277 but threw out only eight of thirty potential base stealers. His bat may have earned him his promotion to the AAA Oklahoma City Dodgers of the Pacific Coast League. So far Shawn has played only nine games in which he showed that he can handle the bat rather well. In 32 at bats he collected 9 hits (.281) of which two doubles and a homerun. He drove in five runs.
In general you can say that Shawn is a player that can hit and field but who has some problems with throwing out runners.

Misja Harcksen:
This 20-yearold pitcher signed a contract with the Dodgers on December 24 2013. The Dutch born from Rotterdam pitched  for Neptunus Rotterdam in the Dutch Major Leagues. When he signed the contract it was agreed that he

would finish school first in 2014 before making the step to Arizona. He spent the 2014 season with the AZL Dodgers as he did for the most part of the 2015 season. But in early August Misja was promoted to Ogden. In his debut in the Advanced Rookie Pioneer League on August 2nd, he entered the game in relief in the seventh inning. In one inning he gave up one run on two hits and left the game with an ERA of 9.00. It would take eight days before Misja got a second shot. In a game in Helena against the Brewers, Misja gave up two hits and two runs but none of them was earned, so he lowered his ERA to 4.50. Last Friday he pitched two innings vs the Billings Mustangs. In those two innings he allowed only two hits and struck out two. His ERA now stands at 2.25. Though he didn’t issue a walk so far and he lowered his ERA pretty well, there is some room for improvement as his opponents hit .316 with him on the mound.

At the age of sixteen, Shakir signed a contract with the Dodgers. The oufielder from Curacao started his career with the DSL Dodgers. In the 2014 season he batted a decent .275 with eleven doubles, three triples and three homeruns. In 34 games he committed 3 errors resulting in a fielding percentage of .967.
Shakir started the 2015 season with the AZL Dodgers. So far is struggling a bit at the plate. In 33 games and 111 at bats he collected 22 hits (.198). In eight games in left field he played without making an error. In six games in right field he also played flawless but he has played the biggest part of his games in center field where he committed two errors. 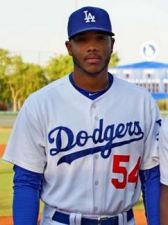 Dodgers in December 2013. In 2014 when he made his first steps in professional baseball, he was solely used as a catcher in the Dominican Summer League. In 26 games he committed 7 errors and threw out 14 of 53 potential base stealers.
This season he has played both as catcher and as first baseman. In 17 games as a catcher he committed two errors and threw out 6 of 33 potential base stealers. In the two games that he played as a catcher, the 18-year old played flawless.
At bat the Curacaoan is doing fine. Last year he batted .275 with an OBP of .314. This year, a step higher, he is even hitting better: .291 with an OBP of .359.

Jerson Domentilia:
In the month of November 2014, Jerson, another talent from Curacao, signed a contract with the Dodgers. This year the 17-year old is debuting with the DSL Dodgers. In 31 games and 75 at bats, he is kinda struggling with an average of .200. At the end of July his BA was at a respectable .289 but it steadily dropped ever since.
Apparently he has been used as a DH quite some time as he only played 24 games at second base and one as an outfielder. At second base he committed 3 errors and in the outfield one.

Wally Vrolijk:
Wally Vrolijk, a 20-year old pitcher from Aruba, is making his first strides in

professional baseball this year. With the DSL Dodgers he has played 18 games as a relief pitcher. In those 18 games he was hit hard. At the end of June his ERA was still under 3.00 but since July 8 his ERA has climbed steadily to 6.04.
His opponents are hitting .290. In 22.1 innings, Wally managed to strike out 25 batters and he gave up 10 walks.