Once again HCAW committed a shipload of errors, four to be exact and all four led to runs. Already leading 3-0 in the top of the third inning, L&D Amsterdam tortured HCAW a bit more. Remco Draijer led off with a solo homerun to right field. Rashid

Gerard then singled through the left side of the infield, followed by a walk drawn by Jesse Aussems. Then Giovanni Tensen was replaced by Steven van Groningen. Koen Nooij then grouded into a force out to third base and was safe on the fielder’s choice. Patrick Bok then hit a ground rule double to right center field that drove in Jesse Aussems and put runners on third and second. Roelie Henrique hit a single that drove in Bok and Nooij for the 7-0. Eventually L&D Amsterdam Pirates needed only seven mercy rule innings to win the game 10-0. Kevin Heijstek earned the win. In 6 innings he allowed only one hit and

fanned nine. Robin Schel pitched one more inning in relief and gave up one more hit. He also gave up a walk and struck out one. Giovanni Tensen was tabbed with the loss. In 2.1 innings he allowed six runs (four earned) on six hits.
HCAW collected two hits in the game. Best hitter for L&D Amsterdam was Remco Draijer, who went three for five with a homerun, two runs batted in and two runs scored.

With Dirk-Jan van ‘t Klooster at second base and Vince Rooi at first, Mark Jan Moorman hit a single towards first base. A

fielding error led to the first run scored by Van ‘t Klooster. In the next three innings, UVV could keep Pioniers from scoring. But in the fifth, with runners on first and second, Vince Rooi cleared the bases with a double towards left center field. Quentin de Cuba eventually drove in Rooi, who had advanced to third on a single by Mooiman, for the third run of Pioniers in that fifth inning. Pioniers added another run in the sixth and stepped up one more time in the eighth. Danny Rombley led off with a double followed by a single by Dirk-Jan van ‘t Klooster and a sac fly by Vince Rooi that sent Danny Rombley home from third base. Dirk van ‘t Klooster advanced to second base on the sac fly. Mark Jan Moorman then homered to  right field and took Van ‘t Klooster

with him. UVV eventually scored a run in the eighth inning and one in the ninth.
Lars Huijer earned the win by pitching seven scoreless innings in which he allowed five hits and struck out four and walked one. Claudio Bavera got the loss. In five innings of work he allowed four runs, of which three were earned. He gave up six hits, walked four and fanned three.
When you don’t take Mike Bazuin’s pinch hit single into consideration, Gilmer Lampe was the best hitter for UVV, going 2 for 4 with a double and an RBI. Mark Jan Moorman went 3 for 3 for Pioniers with a homerun, two RBI, a run scored and two walks.

In the second matchup between the two DSS stayed at the right side of the score again, but this time it was a close game.

Seb Visser led of the second ining with a single and advanced to second on a 5-3 ground out by Tim Halderman.
Another ground out by Joffrey Heus, advanced Seb Visser to third. A single hit by Lex Leijenaar eventually drove in Seb Visser for the opening run. But Mampaey the Hawks answered in the very same inning. With runners on second, DSS pitcher Timo van Lingen threw a wild pitch that allowed both runners to advance a base. After Berend Ruben walked to load the bases, Louie-Jay Sienders hit a sac fly to drive in Julian Goins for the only run of the Hawks. DSS on their turn scored one more time in the fifth as Lex Leijenaar

scored an unearned run. He had gotten on base on a throwing error and advanced to second on the play. He was driven in on a single by Mark Smit.
It must have been a bitter loss for Kevin van Veen. He pitched a good game in which he allowed two runs on six hits, walked three and struck out two. Too bad for him he did not get the much needed run support. Timo van Lingen lasted six innings for the win. He allowed only one run on one hit. Van Lingen struck out one but walked five.

In today’s matchup between the two, I saw a Corendon Kinheim with two faces. One that was uninspired and looked like they didn’t care. And one that caught fire in the end.

An example of the uninspired Kinheim came in the second inning when Urvin Kemp occupied first base when Rien Vernooij grounded into what should have been a double play. But Kinheim’s first baseman Jeffrey Arends threw the ball against the back of Urvin Kemp to blow the double play, so both runners were safe. The other example came in the top of the seventh. With Scott Ronnenbergh on the mound, and with Benjamin Dille on third and Raily Legito on first, Legito tried to steal

second. Ronnenberg stepped off and threw the ball towards second baseman Kevin Moesquit who did n’t even try to catch Legito in a run down, so he was able to retreat to first base again.
Diegomar Markwell cruised through seven innings. Kinheim could not get a grip on his pitching. Only Jasper Keijzer managed to drive in a run on a solo homerun (see photo on the left).
Already trailing 3-1, the seventh inning was a disaster for Kinheim. Scott Ronnenbergh had just replaced Nick Veltkamp but this appeared to be a bad move. A single by DIaz, a bunt by Dille and

a line drive to center field by Legito drove in a run for Neptunus. With runners on the corners, Gianisson Boekhoudt drew a walk to load the bases. Dwayne Kemp hit a sac fly to left field to drive in Dille from third. After Rien Vernooij hit into a force out at third, three consecutive walks given up by Ronnebergh loaded the bases and drove in two runs. Eventually David Bergman replaced Ronnenbergh and retired Christian Diaz 1-3.

In the ninth inning Kinheim started a rally and managed to score four more runs but a pop up by Leonora was caught by shortstop Dwayne Kemp for the final out of the game.
Diegomar Markwell earned the win. In seven innings he allowed only one run on six hits, walked three and struck out four.
Nick Veltkamp earned the loss as he allowed four runs (three earned) on six hits. Veltkamp struck out four and walked four.

Here are some impressions of the game: 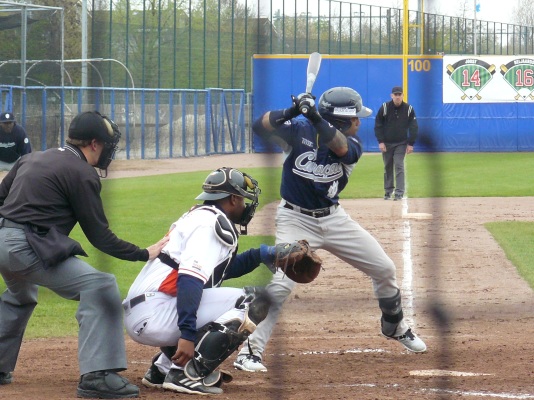 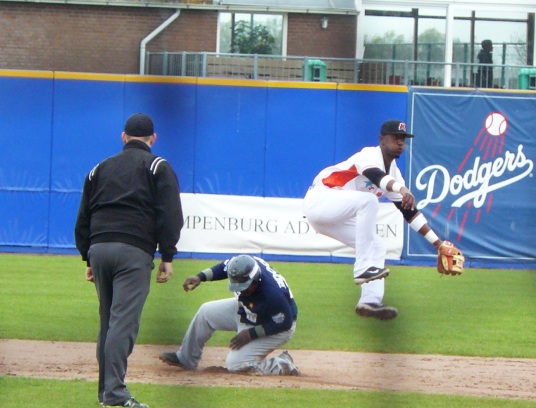