Today the Hanshin Tigers hosted the Softbank Hawks in game one of the Nippon Series.

For three innings both teams did not score but in the bottom of the fourth the Tigers took a 1-0 lead when Mauro Gomez hit an RBI double.

The big inning for the Tigers came one inning later when Mauro Gomez (a single) and Matt Murton (double) both drove in two runs. This was the end of Standridge in this game. Kosuke Fukudome (yes the former outfielder of the Cubs) drove in another run with a double of reliever Masahiko Morifuku.

Randy Messenger gave up a run in the sixth when Lee Dae Ho hit a bases loaded sac fly. One inning later the Hawks scored another run when Yuki Yanagita hit another single off Messenger. The Tigers’ bullpen took care of the remaining two innings. Messenger had a seven inning outing in which he threw 109 pitches. He struck out six and gave up one walk. 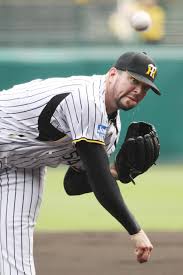 The Tigers are looking for their first win in 29 years.