On the first day of the fourth round of the 2022 Dutch hoofdklasse, the following games were scheduled: Storks @ Pioniers, RCH Memorie Sieraden @ Quick Amersfoort, L&D Amsterdam Pirates @ DSS/Kinheim, and Oosterhout Twins @ Curaçao Neptunus. 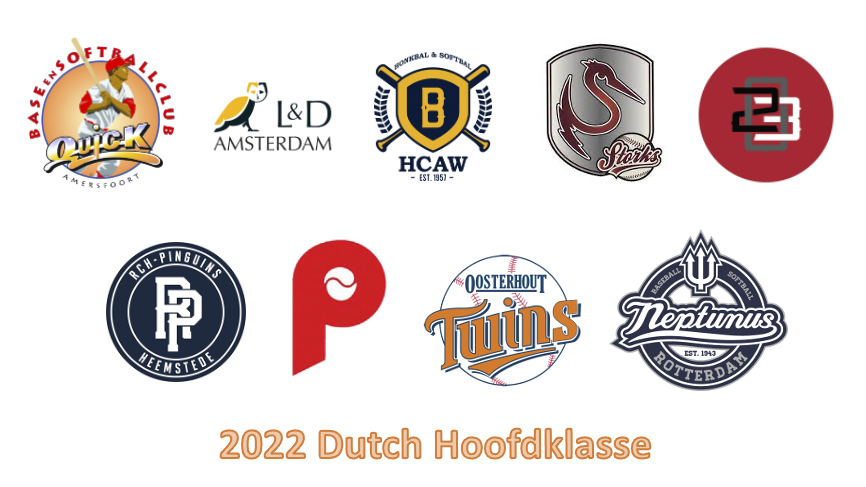 Storks didn’t stand a chance against Hoofddorp Pioniers. The club from Hoofddorp needed only seven innings to clinch the win. Storks took a 2-0 lead in the second inning but that was all the team was capable of.  Pioniers cut the lead in half in the bottom of the same inning and had some big innings to reach the final score. For example in the fourth inning, the team scored on a faltering defense and pitching of Storks. An error by the first baseman, four wild pitches and a walk, allowed Pioniers to score five runs. In the fifth,
Benjamin Meyer earned the win as he pitched six good innings in which he allowed the two runs Storks scored on five hits and four walks and struck out 5. Darryl Jamoena took the

loss. In three innings, he gave up six runs on six hits and two walks and struck out one.
Jorrit Penseel was the best hitter for Hoofddorp Pioniers as he went 2 for 2 with two RBI and two runs scored.

Lochlan Southee and Finn Kragt limited Quick Amersfoort to only four hits in nine innings. On its turn, RCH Memorie Sieraden didn’t have much trouble with the pitching of Quick.
The team took advantage of Johnaikel Acosta struggling with his control in the third inning and scored four runs on a bases-loaded HBP, a bases-loaded walk, and a two-RBI single by Leandro Anasagasti.
In six innings Lochlan Southee gave up three hits, walked two and struck out three for the

win. Finn Kragt earned a three-inning save as he allowed one hit and two walks and struck out two.
Tilsaimy Melfor was the best hitter for RCH Memorie Sieraden, going 2 for 3 with an RBI and a run scored.

For the second time this season, L&D Amsterdam Pirates was take by surprise by an opponent, that has a weaker lineup on paper. Once again the pitching of Pirates didn’t come through. The starting pitcher gave up six runs on six walks and no hits. His successor was hit hard and allowed four runs on eight hits and three walks.
Pirates trailed 8-1 after the first inning. Normally, one would expect that the team is able to erase a lead like that but in this case, the team couldn’t get a grip on the pitching of DSS/Kinheim that limited Pirates to only three runs on seven hits.
Nick Boxelaar earned the win after five innings. He allowed one unearned run on three hits

and four walks and struck out six. Connor Prins took the loss as he allowed the aforementioned six runs on no hits in 0.1 inning.
Bram Blokker was the best hitter for DSS/Kinheim as he went 2 for 3 with two RBI and two runs scored.

After five solid innings, Koen Postelmans had to hand the win to Curaçao Neptunus. In the first five innings, Postelmans limited the team from Rotterdam to three hits but in the sixth, he allowed the two runners on base that would score the game tying run and the go-ahead run.
Oosterhout Twins on its turn, took a one-run lead in the first inning when  Urvin Kemp scored on a fielding error by Neptunus’ second baseman. Two innnings later, Twins extended its score by a run thanks to an RBI-single by Railison Bentura, who drove in Luuk Bun.

Juan Carlos Sulbaran earned the win. He gave up two runs (one earned) on six hits and a walk in seven innings and struck out eight. Kevin Kelly earned the save in two perfect innings, in which he fanned five.
Koen Postelmand took the loss. He allowed three runs (two earned) on five hits and struck out five in 5.1 innings.
Rogear Bernadina and Sheadion Jamanika both hit .500.