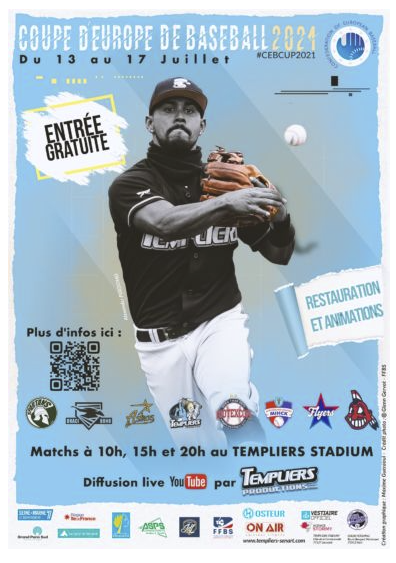 With today’s win over Astros Valencia, Draci Brno set a big step to the promotion to the ECC. Draci trailed twice in this game, 2-1 after the first inning and 4-3 after the fourth inning. But in the fifth, Brno scored two runs on a single by Filip Mostek and never looked back as it scored three runs in the sixth inning and three more in the ninth. All that Astros Valencia could set against were a run in the sixth and a run in the eighth.
Omar Jose Conoropo Hernandez earned the win. He pitched five innings in which he allowed four runs on ten hits and five walks and struck out three. Lowuin Sacramento took the loss. In six innings, he gave up twelve runs on fourteen hits and four walks and struck out four.

Pabel Leandro Manzanero Norato was the best hitter for Draci Brno. He went 4 for 6 with two home runs and a double and drove in four runs and scored three.

This game was the continuation of the game that rained out on Tuesday. At the time the game was suspended, Draci Brno had a 4-0 lead already. A sac fly by Arnost Dubovy drove in the fifth Czech run in the third inning.
In the fourth inning, the Therwil Flyers showed some signs of life. With the bases loaded and no outs, a single by Sven Erik Leemann and a double by Adrian Kauffmann drove in three runs. A sac fly by Rafael Eigenmann drove in the fourth run for the Flyers. After the Flyers tied the game in the sixth inning, both teams scored two runs in the eighth and in the ninth. In the extra innings, Brno took off to a seven run inning. Therwil only scored one run. So one can say that the result was rather flattered as it did not do justice to the previous innings in which both teams were each other’s equals.
Jan Vasourek earned the win. In 4.1 innings, he allowed five runs (four earned) on five hits and three walks as he struck out five. Since the box score is messed up, it is hard to tell who

took the loss. According to the box score, Nathan Alexander Kuchta was replaced as a pitcher twice…
The best hitter for Draci Brno was Premek Chroust, who went 3 for 4 with an RBI and two runs scored.

For six innings, the Therwil Flyers and BK Minsk kept pace with each other. The Flyers started the game with a five-run first inning but Minsk countered with four runs in the bottom of the first. Therwil then extended its lead with a run in the second inning when Christopher Horne stole home plate. Minsk would tie the game in the fourth inning. A leadoff triple, a single and a passed ball would lead to two runs.
In the seventh inning, Therwil took what looked like a decisive lead when the Belarus pitching couldn’t get out of the inning. Two doubles, three singles and two walks led to six runs.  In the eighth inning, the Flyers kept scoring runs. Two consecutive walks, an HBP and another walk allowed the Swiss to score the first of three runs in that inning. A bases-loaded single by Noah Senn drove in two more. Eventually, the Therwil Flyers won 15-7.

Hideori Emanuel Oshima earned the win. In seven frames, he allowed six runs (five earned) on eleven hits, walked four and struck out five. Kiryl Kazlousky took the loss. He pitched 6.2 innings in relief and allowed seven runs (four earned) on nine hits and eight walks and fanned eleven.
Average-wise, Alan John Droke was the best hitter for the Flyers as he went 1 for 1 with an RBI.

In a see saw game in which each team had the lead, the Templiers de Sénart ended at the right side of the score. After the Dornbirn Indians took an early 1-0 lead, the Templiers tied the game in the bottom of the first inning. With a four-run second, Sénart took what appeared a comfortable lead. But Dornbirn scored a run in the fourth and two in the fifth to get within a run from the French team. After Sénart scored a run in the sixth inning, the Indians scored three runs to take the lead. But that lead would not last long as the Templiers scored three runs in the bottom of the seventh to regain the lead again it would not give away anymore even though the Indians came close as they scored four more runs in the ninth.
Despite giving up four runs in the ninth, Jose Paula earned the win for Sénart. In 2.1 innings he allowed two hits, walked four and struck out four. Jochen Pfister took the loss. In seven

innings, he allowed nine runs on fourteen hits and six walks and struck out two.
Andy Paz could pimp his batting average as he went 6 for 6 for Sénart with a double, three RBI and two runs scored.