Looking for logos for this blog post wasn’t easy at all. Many clubs have just the name in some kind of script as their logo. Others have rather dull logos. It is like the Dutch proverb “Act normal, then you are acting strange enough” is reflecting on the baseball logos in the Netherlands. Eventually, I found fifteen nice logos of which I had to make a top 10. You can see the result below.

10.  A.H.C. Quick
Amsterdamsche Honkbalclub Quick is the oldest existing baseball club in Europe, founded in 1913. The logo itself is not really special perhaps but since yours truly played with this club for seven years, this one had to be added to my top ten. Yes there is a bias. 😉

9. Caps
This logo is modern but it is clearly about baseball. The modern look is catchy (no pun intended) and good looking.
The club is from Hoogeveen in the province of Drente.

8. Onze Gezellen
This club is one of the many baseball clubs in Haarlem.
The logo is rather simple but that is what I like about it. The goat head can be explained since the nickname of the club is Ouwe Geiten (old goats). Likely because of the abbreviation of the name OG which was transformed to Ouwe Geiten.

7.  PSV
PSV stands for Philips Sportvereniging (Philips Sports Club). It is an omni club which practices several other sports next to baseball: Soccer (for which the club is best known), swimming, track and field, cricket, etc.
As the logo shows, the club is from Eindhoven. I like the playful logo that shows a kind of morphing of a baseball with a lightbulb (Philips started as lightbulb manufacturer).

6.  Storks
This club from The Hague is the only club from the Dutch hoofdklasse in my top ten. About five years ago, a club member designed a new modern logo. The result was stunning IMHO. The logo is very modern but the designer succeeded to create a logo that contains the bird in the shape of an S. The stork is part of the coat of arms of the city of The Hague.

5.  Greenhearts
This club from Linschoten in the province of Utrecht has a catchy logo showing a bull in a baseball outfit. The name Greenhearts may refer to the area Linschoten is located. That area is known as “Het Groene Hart” (the green heart). The location of Linschoten (a rural area) may also explain the choice for the bull as a logo.

4.  Gryphons
Gryphons is a club from Rosmalen in the province of Noord-Brabant. The municipality is adjacent to the capital of the province, Den Bosch.
Even though the logo itself doesn’t show any baseball relationship (besides the words “honkbal” and “softbal”), I like the modern look of this mythical creature.

3. Wizards of BOZ
BOZ in the club name stands for the city Bergen op Zoom which is located in the most Western Part of the province of Noord-Brabant. What I like about this logo is that it looks like a minor league logo and I have a soft spot for minor league logos.

2. Stags
It was a very close call with the logo of the number one spot but eventually, this logo finished second. I like the modern look of this logo, showing a deer with the club name. The club is from Etten-Leur, also from the Western part of the province of Noord-Brabant. Yours truly has also played for this club, but no, there is no bias. It is just a cool logo. 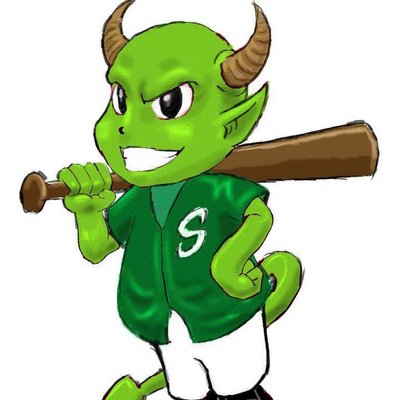 1. Sullivan’s Green Devils
This club is from Monnickendam, which is located about 15 kilometers Northeast of Amsterdam. This logo is absolutely stunning. It is also has a minor league feel. Unfortunately, I could not find a complete view of the logo, so I had to take this one from Twitter.