This cap was worn by the Croation national team during the 2016 European Championship. Of course this cap resembles the one of the Cincinnati Reds a lot because of the wishbone C. Perhaps that is the reason why Croatia turned to a different design with the 2019 European Championship. I like the two-toned cap with the red crown and the blue lid. The Croatian flag is embroidered on the right side of this cap. Fun part is the text on the back of this cap: “Proudly sponsored by http://www.VukGripz.com”. The main reason it is on my list because it was a gift by the former manager of the Greek national team.

For about four years, the national Japanese baseball team is called Samurai Japan.

For years, the team sported Mizuno uniforms but since last year’s Premier 12 tournament, the team is sponsored by Asics. The current cap differs from the cap, Japan sported during the previous World Baseball Classic. That one had a navy color and sported a navy J with a golden outline on the front. The current one has a lighter shade of blue and sports a red J on the front, also with a golden outline. On the right side of the cap, the Samurai Japan logo is embroidered. The cap is made of a kind of mesh fabric, something the Japanese seem to like a lot as many of the NPB caps are also made of mesh.

Even though the F on the front of the cap is on the big side, I like this cap very much. It is simple and doesn’t have too many bells and whistles. Just like Sweden, the French sport a cap in a color that is not quite their national color. When you look to the French national soccer or rugby teams, the jerseys are in a much lighter shade of blue although the French soccer team recently turned to navy as well. Like many national team caps, the French one sports the national flag on the side.

For a year or two the Greek national team sports a new cap. The previous one was nice but it resembled those caps you buy in tourist shops. The current cap looks like a real baseball cap. It is created in the national colors (royal blue), sports an H on the front (Hellas, Greek for Greece) and the Greek flag on the side. I like the simplicity of this cap and of the H on the front. 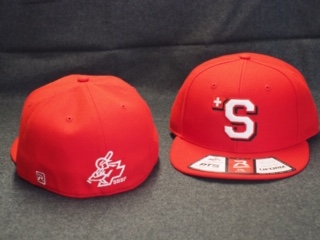 The level of play in Switzerland may not be quite the same as in the aforementioned countries, I still like the Swiss national team cap a lot.
It sports an S that covers the first letter of the county in all four official languages of the country: German (Schweiz), French (Suisse), Italian (Svizzera), and Retro Roman (Svizra). Next to the S, there is a tiny Swiss flag that has a square shape. On the back of the cap, the logo of the Swiss baseball and softball federation is embroidered.

What I like about the Czech national team cap is the logo on the front. The CR logo

in a home plate shape. On the right side of the cap, the Czech national flag is embroidered. This is a completely different design than the cap the Czechs sported during the World Baseball Classic Qualifiers.

The main reason why I like the Belgian national team cap so much is that I have one myself. It is a game-worn cap. What I like about this cap is that it is two-toned: a black crown with a red lid. The cap sports a playful B on the front and the Belgian national flag on the back, something I like as well.

First of all, I got a soft spot for green caps even though green is not my favorite color. As a result, I like this Aussie cap a lot. The best part of this cap is the A that is surrounded by the stars of the Southern Cross that are also shown on the Australian Flag. The version that is shown is of the 2017 World Baseball Classic.

2. Kingdom of the Netherlands

Of course my own country needs to be in the top two. This is the cap the Dutch team wore during the 2013 World Baseball Classic. The orange crown and the black lid make a

fine combination. Unfortunately, the colors of the cap were changed during the 2017  WBC as the crown was black and the lid orange. I did not really like the combination. Since the NL logo is licensed by New Era, the Dutch team wears a different cap during international tournaments other than the WBC. That one is black and sports an orange crown on the front. Not my cup of tea. You may wonder why this 2013 WBC cap is not ranked first. Well because there is one cap that I like better as you can see below.

What I like about the Swedish national team cap is its simplicity. The national symbol of Sweden, the three crowns (“Tre Kronor” in Swedish) is well represented on the front of this cap. In the past, Sweden sported a shade of blue that resembled the national flag. But a few years ago, they turned to navy because that looks more impressive. I must admit that this cap looks better than the royal blue one they once had.

One Reply to “My top ten of national team baseball caps”