In this episode of Baseball Related Songs, we pay
attention to another song written 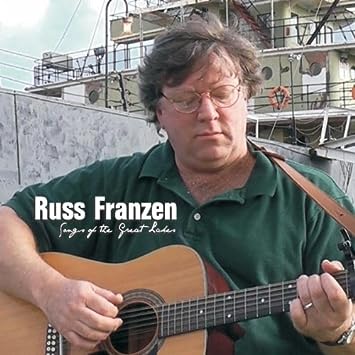 and performed by singer-songwriter Russ Franzen: “The Park at the Corner.” Like “Tiger Stadium’s Lament” this song is also about the former Tiger Stadium, aka Navin Field or Briggs Stadium.

As written in the previous blog post about him, Russ Franzen is a singer-songwriter and balladeer from the Great Lakes Area. Franzen graduated at the Southern Illinois University-Carbondale.

Most of the time, Russ Franzen writes and sings about the maritime life and history of the Great Lakes area but the baseball fan in him makes him turn to a song about baseball now and then.

In this song, Franzen describes the area where Tiger Stadium once stood. After the ballpark was torn down, it was a vacant lot at the corner of Trumbull Avenue and Michigan Avenue. For years, a group of people called the Navin Field Grounds Crew maintained the field a few times a month and played some ball until the police showed up to send them away. The Navin Field Grounds Crew is mentioned in this song as “people who still care.”

Eventually, a new ballpark was erected at the site of former Tiger Stadium. It is a much smaller ballpark that is used by the Detroit Police Athletic League or PAL for short.

After the Detroit Tigers moved into Comerica Park, a foundation called Friends of Tiger Stadium tried to prevent the demolition of the old ballpark. But as the financially strapped city of Detroit paid $400,000 per year only to have the grass mowed, it was clear that the end of the ballpark was nearing.

In October 2007, an online auction of the stadium’s memorabilia was held by Schneider Industries, which drew $192,729. The city used the earnings to pay for the demolition costs. Demolition began on June 30, 2008. A week into demolition, it was announced that the field, foul poles, and flagpole would be preserved.

The lyrics of “The Park at the Corner” are as follows:

1) It looks like a park, only grass, and dirt
And a chain-link fence to keep people out.
Just a vacant lot in Detroit City
On the old Chicago Road.
But not long ago, it was a different park,
Where men played a game made for boys.
And every summer for a century,
The crowds filled this park with noise.

2) It’s a place that’s woven in the histories
Of millions like you and me.
The Haymarket gave way to a place men played
A game with a bat and ball.
We heard the calls of the vendors,
And smelled the scent that only old ballparks had.
We heard the sounds of the ball hitting bat and glove
As we cheered for the team we love.

3) Time moved on. The team did, too,
To the ballpark in downtown.
“It’s only a building,” some people said,
And the walls came tumbling down.
From the dust it rose, to the dust returned;
Now a field in the open air.
But the grass on the infield is still cut to play
By people who still care.

The greatest of baseball players
Once played here with our teams.
As once it was, it will always be
Our field of hopes and dreams.

Below is the video of the song, so you can listen to this little gem.