In the past two years, you could read an overview of the national champions in Europe. The Dutch Baseball Hangout would like to continue with that, so here is the 2019 edition.

Austria:
The Dornbirn Indians took a 2-0 lead over the Vienna Metrostars, with convincing victories (6-1 and 9-2) in the first weekend of the Austrian championship series.
In the second weekend, Dornbirn won the next two games (6-3 and 3-2) to sweep the Metrostars in the best of seven series. The 3-2 victory was a hard-fought one as it took the Indians eleven innings to clinch the victory. Thanks to a solo home run in the eleventh inning by Chris Squires, the Indians won their third overall championship.

Belarus:
No surprises in Belarus as Minsk won the Belarus championship once again by beating the Logishin Wolves 3-0 in games (15-0, 17-7, 18-12), next to winning the Lithuanian baseball league.

Belgium:
After the first two games of the Belgian Series, which were easy victories for the Deurne Spartans (5-0 and 12-2), the third game was rained out. The infield of the Borgerhout Squirrels was soaked.
Salient detail: As the rules of the Belgian Baseball federation tell that the team that finished on top of the standings at the end of the regular season will be declared champions if the Belgian Series isn’t decided before October 30th, the Borgerhout Squirrels would be declared champions. But it didn’t get that far as the third game was played on Sunday, October 20 at the facility of the Borgerhout Squirrels. The Spartans took a commanding 3-0 lead in the first inning and never looked back as they won 5-0 sweeping the Squirrels for the championship, their second in a row and fourth overall.

Bulgaria:
The Sofia Blues took a 2-0 lead in games vs the Blagoevgrad Buffaloes as they beat them 5-4 and 10-0 to take, what appeared a commanding lead. By winning game three 7-6, the Buffaloes inched closer in the series but that did not stop the club from Sofia to clinch the Bulgarian title as it won game four 7-1. This title was Sofia’s third overall and its second in a row.

Croatia:
After two years of Karlovac Olympia ’83 domination, Nada Split is the new Croatian champion. In a best-of-seven series, a decisive seventh game was needed. Karlovac had a 2-0 and 3-2 lead in the series but Split refused to give up. Nada Split won the seventh game 13-8, clinching its eighth overall Croatian title. 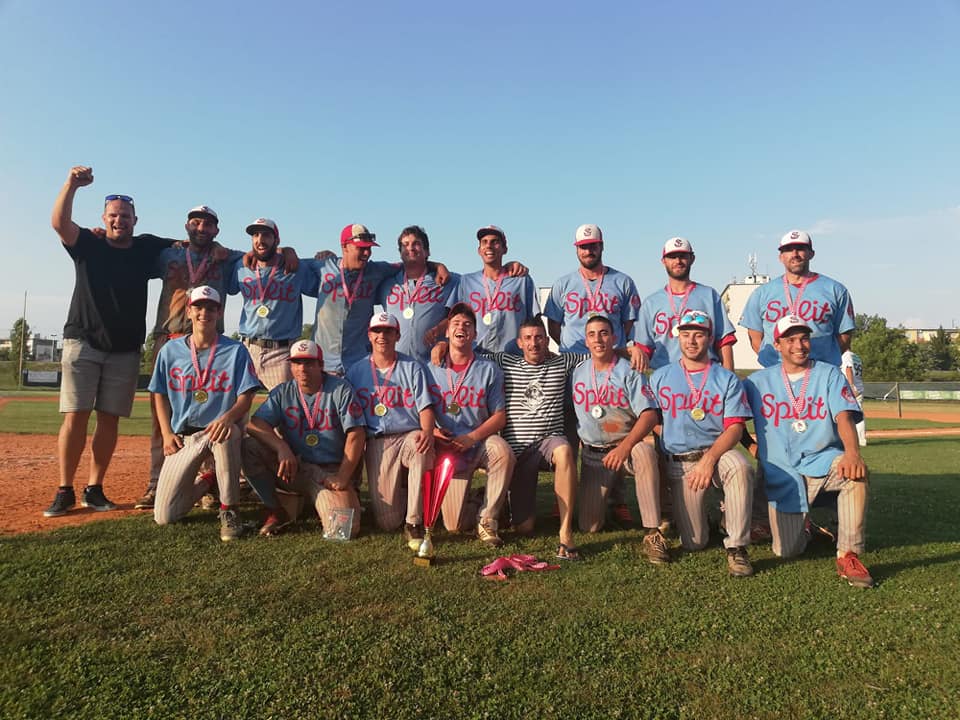 Czech Republic:
For the second year in a row, Arrows Ostrava has won the Extra League championship. In a best-of-five series, Ostrava swept Eagles Praha (Prague) 6-3; 10-1; 5-2. This year’s title was the club’s second overall.

Denmark:
No surprises in Denmark. The Urban Achievers from the Danish capital Copenhagen has won its sixth Danish title in a row by beating the Odense Wolves 22-7 in the final.

France:
Another year with the same champion as the previous one. The Rouen Huskies won their fifth consecutive title and fifteenth overall by beating the Templiers de Sénart 4-1 in games (9-2; 10-3; 3-4; 14-7). The Huskies ended the regular season on top of the standings but had to share first place with the Savigny-sur-Orge Lions with a 16-4 record. But in the six-team playoff round, the Huskies were the best as they finished on top of the standings, leading the runner up, Templiers de Sénart by two games.

Germany:
A championship series with the same teams as the previous two seasons. The defending champion Bonn Capitals and the Heidenheim Heideköpfe. The first game was won by Heidenheim with clear numbers: 17-1. Bonn bounced back in the second game and won 3-0. But that was all the Capitals could as Heidenheim would win the next three games (7-2 and 3-2). For Heidenheim, it was its third German championship.

Great Britain:
For the third consecutive year, the London Mets have won the British championship. The club finished the regular season with a 23-1 record. The Mets beat the Essex Arrows 4-1 in the semi-final and beat the London Capitals in the final 14-4.

Hungary:
The Budapest Reds won the Hungarian championship by finishing on top of the standings of the six-team Hungarian baseball league.  With an 11-2 record, they were a tad better than baseball club Érd that finished with an 11-4 record.

Ireland:
After the Dublin City Hurricanes (15-4) and the Greystones Mariners (20-11) had won a game each in the Irish best-of-three championship series, it all came down to the final game on Sunday, October 6. The Dublin City Hurricanes stayed on the right side of the score in game three and clinched its seventh overall and fifth consecutive title by beating the Mariners 15-6.

Italy:
After being almost dead, trailing ParmaClima Parma in the semi-finals 2-0, Fortitudo Bologna came back from a beaten position and won three in a row to move into the Serie A1 finals where it met San Marino. Bologna clearly had the momentum going as San Marino didn’t stand a chance and was swept in the best-of-five championship series: 3-1,  6-5, 4-0.

Lithuania:
The Lithuanian baseball competition is an open league in which Minsk from Belarus was participating last season.  The best of three final was played between Minsk and the Utena Titans. Minsk won 2-1 (3-13; 15-0; 17-2).

Netherlands:
Curaçao Neptunus appeared to cruise to another championship as they led the Holland Series 3-0 in games and needed one more win. But L&D Amsterdam Pirates fought its way back and tied the series at three in Amsterdam before heading to Rotterdam for the decisive seventh game. Nobody expected it to happen but Amsterdam beat Neptunus in their own Family Stadium 6-0 and clinched its fifth overall championship.

Norway:
For the change, the Oslo Pretenders did not win the Norwegian championship this year. The Øhil Royals clinched the championship. A nice Dutch twist. Part of the Royals is the Dutch-born Tristan Korf (back row, fourth from the right).

The Royals finished on top of the standings, leading the Oslo Pretenders by two games with a 10-2 record.

Portugal:
Baseball in Portugal is still in its infancy as the Portuguese Baseball Federation was founded in 1996 and the Portuguese baseball league (Liga Atlântica de Basebol) in 2006. Nevertheless, there are seven clubs in the highest Portuguese league. The Lisboa (Lisbon) Capitals and CD Feirense took on each other in the championship series. Game one was won by Feirense 8-4 but Lisboa bounced back in game two, beating Feirense 5-1. In game three, Lisboa never stood a chance as the club was beaten 17-1. 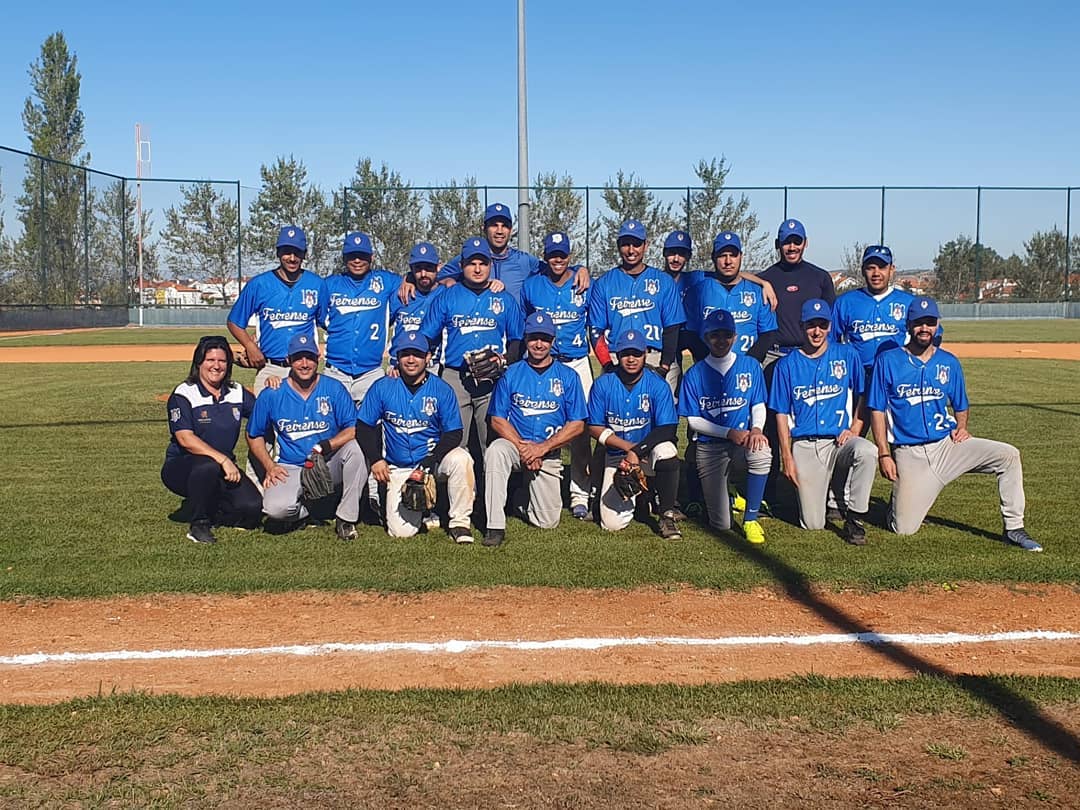 Russia:
In a best-of-seven series, Russtar (which is the result of a merger between two Moscow based baseball clubs) and Moskvich (Moscow) both clinched three victories, so a decisive seventh game was needed. Russtar had a 3-0 lead in the series as they won their games by a run. Moskvich came back in the series by winning two of their three victories with a ten-run margin. As the seventh game rained out on Sunday, it was played on Monday, October 7. Moskvich beat Russtar 8-3. Even though all games were played at the Russtar Arena, Russtar could not take advantage of playing in its own ballpark.

Spain:
For the eleventh time in their history, the Tenerife Marlins have clinched the Spanish title. The club from the Canary Islands finished on top of the standings, with a five-game lead over San Inazio Bilbao Bizkaia. This year’s title was their third in a row.

Sweden:
The Solvesborg Firehawks won its second Swedish title in three years and their second title overall as they beat the Rättvik Butchers 11-3 and 15-0 in a best-of-three series.

Switzerland:
The Therwil Flyers took over the Swiss Championship from last year’s champion Zürich Challengers by beating them 3-1 in the best-of-five series (3-2, 4-3, 6-7, 6-2). This year’s title was their twelfth overall. 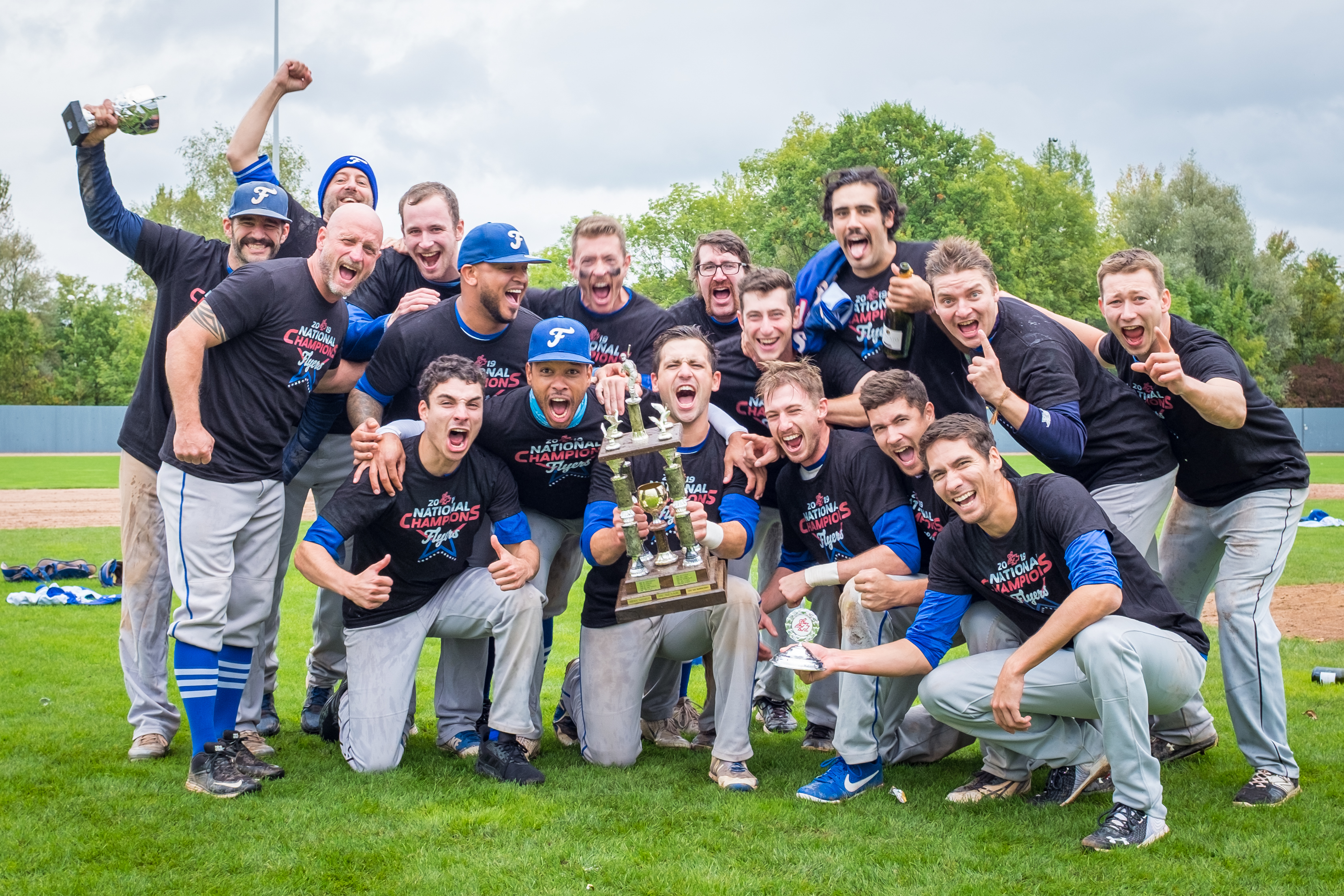 Ukraine:
No surprises in Ukraine as BioTexCom-KNTU from Kropyvnytskyi clinched its twenty-fourth Ukrainian title as it beat their cross-town rivals BioTexCom Sssor 2-1 in games (11-1, 20-6, 1-2).