Well, the San Diego Padres fans have something to look forward to. NBC San Diego reported the club will unveil its new brown uniforms on November 9. Set the date into your agenda.

According to the news website, a team representative confirmed to NBC 7, the club will unveil the new uniforms on that day in Petco Park.

The Padres wore some variation of brown and mustard from their inception in 1969, until 1984. In recent years they’ve worn brown during Friday night home games. Also their previous set of uniforms had a road uni in a kind of sandy color.

As stated above, the Padres had several varieties of brown. From their inaugural season through the 1971 season, the club had a white uni with brown and yellow accents and a tan road uniform.
In 1972 and 1973, the team had yellowish uniforms. From 1974 the team had uniforms in white, brown and yellow that sported the famed taco bell cap. 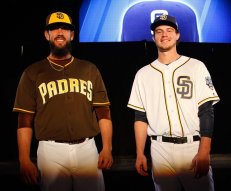 orange interlocking SD logo on the front. Except for the sandy road uniform, the club left the brownish colors in 1991 until 2016 when they returned to brown Friday uniforms that sported a spin-off of the taco ball cap as a part of the celebration of the 2016 All Star Game that was organized by the Padres in that year.