In this episode of Ballparks around the world, we pay attention to Koshien Stadium which is located in Osaka. It is the oldest baseball stadium in Japan and home of the annual Koshien high school tournament and the Hanshin Tigers.

Koshien Stadium opened its doors in 1924 to host the National High School Baseball Invitational Tournament or Koshien for short. This Koshien Tournament is a big thing in Japan. Juvenile baseball players dream of playing in this tournament even more than becoming a pro. The tournament is criticized from outside Japan as pitchers throw hundred + pitches, several days in a row. The Koshien tournament is even bigger than NPB baseball. As a result, the Hanshin Tigers have a three-week road trip in August so their schedule does not interfere with this tournament.

The Koshien Stadium is a real baseball shrine to the Japanese baseball fan. It is the only ballpark in the NPB with an all dirt infield.

Next to the Koshien tournament, the stadium is home to the Hanshin Tigers of the NPB. The club is known for its loyal fan following. The club started to play as the Osaka Tigers in 1936 and adopted its current name in 1961. The name Hanshin was used before. In 1940 with the Japanese Empire still on the rise, the name was changed into Hanshin B.C. due to anti-foreign sentiments. After WWII, the name was changed back to Osaka in 1947. The club won pre-NPB championships in 1937, 1938, 1944 and 1947. The sole NPB title was won in 1985. It is said the team is cursed since then as the fans had people who looked like Tigers players into the local canal. Since no one looked like Randy Bass, the fans grabbed a statue of Colonel Sanders of Kentucky Fried Chicken and threw it in the water. After many seasons without a pennant win, the Tigers were said to be doomed never to win the season again until the Colonel was rescued from the river. 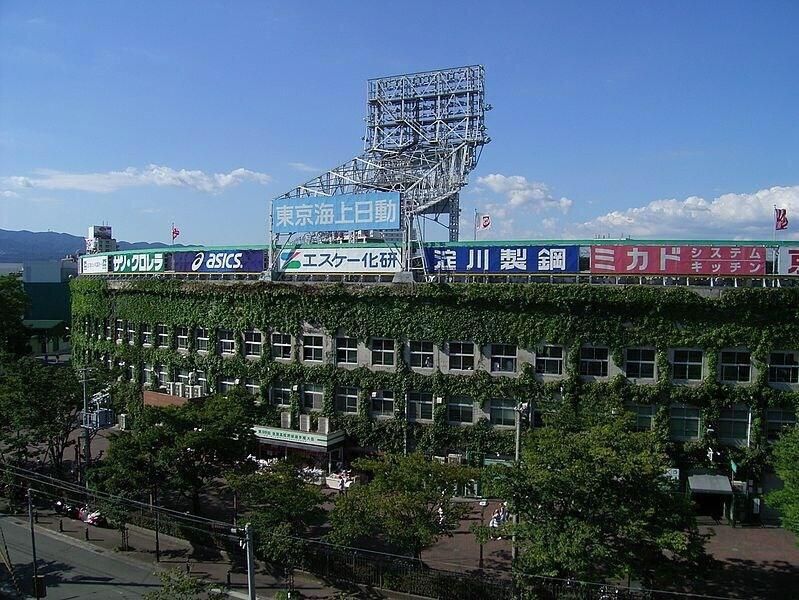 Koshien is embellished in the minds and hearts of all Japanese baseball fans as the place where dreams are fulfilled (or shattered). The black soil of Koshien turf is impressive for young players, who scoop up handfuls of this turf at the end of their games, as souvenirs of their time on hallowed ground.

The stadium houses a museum showing the stadium’s history and some of the great players who started their careers here. 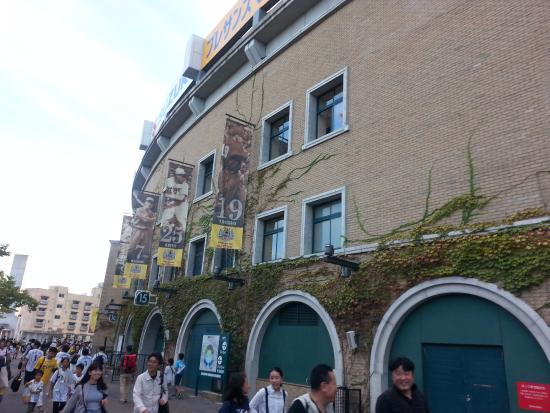 When the stadium opened it had a capacity of 55,000 seats, back then by far the largest stadium in Asia. The name Kōshien comes from the Sexagenary cycle system.
Even though, the resemblance is hard to see, it is said that the design was heavily influenced by the Polo Grounds, former home of the New York (now San Francisco) Giants. Nowadays the ballpark has a capacity of about 47,000.

In 2007, a big renovation started that would upgrade the stadium. Part of the renovation was the installment of solar panels on the roof of the grandstand making it an eco-friendly stadium.

After the characteristic ivy was removed for the renovation, it was placed back against the outside walls of the stadium.

Here are some impressions of the ballpark: