In today’s edition of Baseball related music, we pay attention to “Talkin’ baseball, sung by Terry Cashman. The song is describing the history of baseball from the 1950s to the beginning of the 80s. The song was released in 1981, the year the regular MLB season was shortened by a player strike.

The song was not only performed by Terry Cashman, it was also written by him. Cashman was inspired by three outfielders who are shown in a photo. The fourth outfielder on that photo, Joe DiMaggio was airbrushed from it as the photo was used as the cover of Cashman’s single. 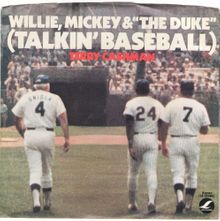 The three remaining players who are also mentioned in the refrain of the song: Willie, Mickey, and the Duke, referring to Willie Mays (New York Giants, #24), Mickey Mantle (New York Yankees, #7), and Duke Snider (Brooklyn Dodgers, #4) as they all played in New York during the fifties (the golden era of baseball).

In this song, there is a shipload of referrals to baseball players that played in the aforementioned time span. For example Bobby Thomson (known for his shot heard ’round the world in an extra playoff series between the New York Giants and the Brooklyn Dodgers for the National League’s 1951 pennant), Bob Feller (star pitcher of the Cleveland Indians in the 1930s, 1940s and 1950s), Casey Stengel (manager who guided the New York Yankees to five consecutive World Series titles from 1949 to 1953), Jackie Robinson, Eddie Gaedel (a midget, who was used as a publicity stunt in 1951 by then owner of the St. Louis Browns Bill Veeck), George Brett (third baseman of the Kansas City Royals), Tom Seaver (a pitcher who was part of the Miracle Mets, who won the 1969 World Series after trailing the Cubs by ten games on August 14) and Reggie Jackson (star outfielder who played for the Kansas City/Oakland A’s, Baltimore Orioles, New York Yankees and the California Angels) to name a few.

Explanations of some of the other references in the song:

“The Whiz Kids”: a nickname for the Philadelphia Phillies in the early 1950s, especially their 1950 pennant winner. The team had a lot of young players but despite winning the 1950 NL pennant, the team was swept in the World Series by the Yankees.

“The national pastime went on trial”: Baseball has been called the national pastime since the 1800s. In the 1950s, there were attempts to overturn baseball’s exemption from anti-trust laws, especially in Toolson vs. New York Yankees. George Toolson was a minor league pitcher in the Yankees’ farm system in 1949. He thought he was good enough to pitch in the majors but with the talent-loaded Yankees, he did not get a chance. In 1950, he filed a case against the reserve clause in an attempt to get a chance to play elsewhere.

“And Ike was the only one winning down in Washington” refers to U.S. President Dwight Eisenhower. The Washington Senators was one of the worst teams in those days.

“The Oklahoma Kid”: This refers to Mantle, who was from Oklahoma.

“Bobby Bonds can play for everyone”: Bonds played for eight teams in his career, and by 1981 had played for all eight of those teams within eight seasons.

“Rose is at the Vet”: After spending 16 years with the Cincinnati Reds in 1978 Pete Rose joined the Philadelphia Phillies, who at the time played at Veterans Stadium.

“Rusty again is a Met”: Rusty Staub had been traded away by the New York Mets following the 1975 season but returned in 1981.

“And the great Alexander is pitchin’ again in Washington” is actually a double reference, to Grover Cleveland Alexander and to U.S. President Ronald Reagan. When the song was released, Reagan had recently become president of the United States; the line refers to the fact that in his former career as a film actor Reagan had portrayed Alexander in the movie The Winning Team.

“If Cooperstown is calling, it’s no fluke”: The Baseball Hall of Fame is sometimes referred to as “Cooperstown”, as it is located in the town of Cooperstown, New York. Ultimately only five of the players mentioned in this verse were elected to the Hall of Fame. Reggie Jackson, Tom Seaver, Rod Carew, Gaylord Perry, and Mike Schmidt made it; Dan Quisenberry, Steve Garvey and Vida Blue, were not.

“Say hey”: Used in the final chorus, Willie Mays was known as “The Say Hey Kid.”

“The Bachelor” and “Cookie” mentioned in the song’s bridge are not baseball figures, but childhood friends of Cashman’s.

The Whiz Kids had won it
Bobby Thomson had done it
And Yogi read the comics all the while
Rock ‘n roll was being born
Marijuana, we would scorn
So down on the corner
The national past-time went on trial

We’re talkin’ baseball!
Kluszewski, Campanella
Talkin’ baseball!
The Man and Bobby Feller
The Scooter, the Barber, and the Newk
They knew ’em all from Boston to Dubuque
Especially Willie, Mickey, and the Duke

Well, Casey was winning
Hank Aaron was beginning
One Robbie going out, one coming in
Kiner and Midget Gaedel
The Thumper and Mel Parnell
And Ike was the only one winning down in Washington

We’re talkin’ baseball!
Kluszewski, Campanella
Talkin’ baseball!
The Man and Bobby Feller
The Scooter, the Barber, and the Newk
They knew ’em all from Boston to Dubuque
Especially Willie, Mickey, and the Duke

Now my old friend, The Bachelor
Well, he swore he was the Oklahoma Kid
And Cookie played hooky
To go and see the Duke
And me, I always loved Willie Mays
Those were the days!

Well, now it’s the 80’s
And Brett is the greatest
And Bobby Bonds can play for everyone
Rose is at the Vet
And Rusty again is a Met
And the great Alexander is pitchin’ again in Washington