The Frisco RoughRiders will organize a State Fair of Texas promotion on September 2nd when they face the Corpus Christi Hooks.

The Texas based Frisco RoughRiders are the AA affiliate of the Texas Rangers in the Texas League (how much Texas do you want?).

During this promotional night, there will be a video homage to the fair, midway games, and some of the great food items from the Fair available inside Dr Pepper Ballpark.
There also will be a Fletcher’s corny dog eating contest, and some of the great tastes of the Fair available at concession stands. Some lucky fans will be selected to participate in fair-themed between inning entertainment. To finish the night, there will be a big fireworks show. 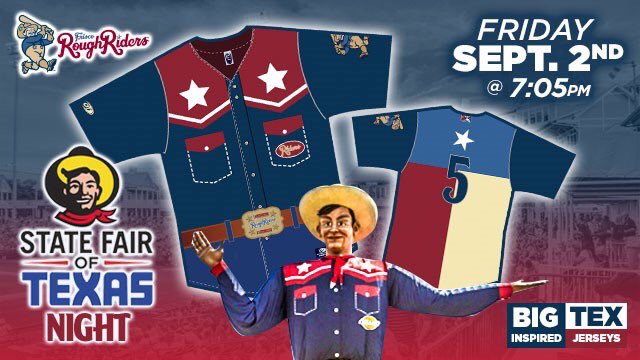 To complete this celebration, the team will wear jerseys based on the Texas state flag. The front of the jersey, in typical western style, includes a representation of pockets on either side of the chest with pearl snaps and stars above. Near the bottom of the uniform there is a RoughRiders belt buckle, with the text “A Texas Tradition” and “Since 2003,” (the inaugural season of the Frisco RoughRiders). The back of the jersey celebrates the Lone Star State with a representation of the Texas state flag.

The State Fair of Texas is a yearly market organized in Fort Worth which lasts 24 days. This state fair has a lot of attractions like livestock, creative art competitions and an auto show. Next to these attractions there is a fun fair and a lot of market stalls with food, tools and lots of other things.
This State Fair is a pretty big thing in Texas and that is exactly why the RoughRiders are having a State Fair themed promotion.

The jerseys will be auctioned for charity. This time the auction will benefit the Kids Shouldn’t Have Cancer Foundation in memory of Jonny Wade. The Kids Shouldn’t Have Cancer Foundation was founded in 2016 in memory of Jonny Wade, shortly after brain cancer took his life at the age of eight. The foundation honors Jonny’s wish that no other kids should have cancer by influencing legislation, raising money for research, and increasing awareness of pediatric cancer issues.