Like said before until 1963 baseball was dominated by teams from Amsterdam and Haarlem. But in 1963 out of nowhere Sparta from Rotterdam became Dutch champion. From 1963 to 1974 the club clinched nine national titles, a record only to be improved in 1985 by Haarlem Nicols and later by DOOR Neptunus from Rotterdam. Haarlem Nicols was the result of a merger between EHS and EDO, both located in Haarlem. The new club played it’s home games in the new Pim Mulier Stadium.
In 1966 Haarlem Nicols became the first Dutch baseball club to win the European Cup for clubs. The Dutch soccer clubs could only dream of a success  like this.

In 1963 a real baseball stadium was built in Haarlem. This stadium would be the home of the Haarlem Baseball Week, a yearly event. 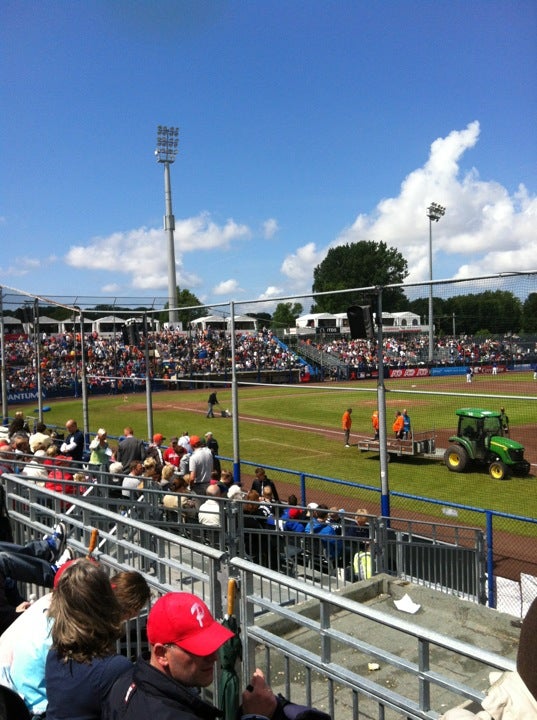 The Pim  Mulier Stadium, home of the Haarlem Baseball Week.

In the early sixties, each team played 14 games (!). One game every weekend. If your team had a dominating pitcher, he could win 12 of those 14 games and your team would win the pennant easily. So the few players who had visited the American spring training camps shouted that more games had to be played. Several players oppose because they wanted to spend time with their families too but eventually the Dutch baseball federation realized that two games in a weekend were necessary to improve the level of the game in the Netherlands.

Dutch baseball was dominated by Sparta from Rotterdam in the first years of the seventies. The magnificent three from the Dutch Antilles were unstoppable: Hudson John, Simon Arrindell and Hamilton Richardson. These three had a big influence on Sparta. But after 1974 it will be over. The players of Sparta seemed to be satisfied with 9 titles in 15 years. Sparta would no longer play an important role.

At the end of the 1972 season the soccer club Ajax, decided to cut loose the baseball branch. This is the end of a legendary ball club. Soccer players like Johan Cruyff and Johan Neeskens did play baseball. Cruyff was a decent catcher.

Then at the end of the 1977 season a scandal caused some turmoil at O.V.V.O from Amsterdam. The club seemed to pay it’s soccer players. The baseball branch didn’t agree with that and big names like Han Urbanus decided to leave the club and founded a new club: Amstel Tijgers. Players like
Charles Urbanus jr. (pitcher/shortstop), Jan Hijzelendoorn (pitcher), Paul Smit (catcher) and Don Wedman decide to join. Almost the complete Hoofdklasse team followed. The Dutch Baseball Federation tried to mediate, but the rebels did not want to come back. The city of Amsterdam appointed a terrain in the Western part of the city. First the new club thought that the field would be too far away. But in the end the new club built a great baseball field (Quick Amsterdam, mentioned before, now plays on this great field).

The very first team photo of Amstel Tijgers in 1977

In the meantime O.V.V.O. could not be persuaded to take a step back to the Eerste Klasse (now overgangsklasse; a lower division). Amstel Tijgers started the first season in the “Eerste Klasse. With players like the ones mentioned above it didn’t come as a surprise that the club won the championship of that league, to earn the promotion to the highest league the next season (1979). Because O.V.V.O. refused to take a step back, the 1978 season was a disaster and the team would be demoted.
Amstel Tijgers won the Dutch title in 1979, 1980 and 1986.

Full house at a home game of Amstel Tijgers

In 1979 a Dutch pitcher made his MLB debut on the mound in Milwaukee. The Red Sox were trailing 4-1 when they called pitcher Win Remmerswaal from the bullpen Despite the 5-3 loss vs the Brewers, his debut was a good one. After the game shiploads of journalists asked him all kind of questions. They want to know how he did come this far. Unfortunately the MLB career of Win Remmerswaal lasted only two seasons. Injuries and especially the hard life of a ballplayer (travelling, drugs, etc.) paid their toll. After the 1980 season, Remmerswaal returned to Europe. He pitched 22 games (3 victories and 1 loss). His short career in baseball’s Walhalla, has lasted 55 innings. After his Major League career, Remmerswaal went to Italy. He played for several teams for many years, making some money with what he could do best. After his baseball career Remmerswaal was in dire straights. Living on the streets at times causes pneumonia and a coma. The once celebrated pitcher now sits in a wheelchair and has a hard time to communicate. “He is far away from Fenway Park,” says his father, who just like his only living son has accepted their destiny.