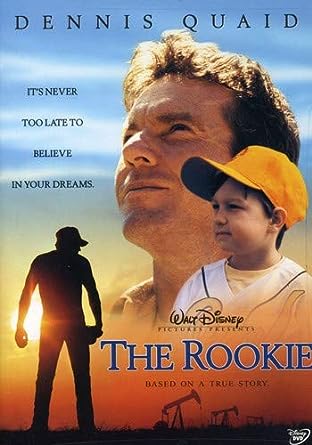 10.  The Rookie
Also, this movie is based on a true story. It is about a high school teacher that also coaches the baseball team of the school. After being drafted by the Milwaukee Brewers at a younger age, his career is over when he tears up his shoulder. At one point in the movie, the kids of the team he coaches discover he can throw really hard and they encourage them to go to an MLB tryout. He agrees but on the condition that the team will win the district’s championship. During a tryout for the (back then) Tampa Bay Devil Rays, the scouts are really impressed. To make a long story short, the teacher makes it to the Bigs where he will a short career as a reliever for the Devil Rays. 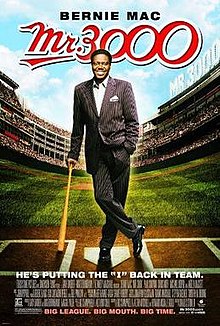 9.  Mr. 3,000
The late Bernie Mack stars in this movie that is between a comedy and a drama. The result isn’t either funny nor dramatic. The story is about a former baseball player that walked away from the game after he collected his 3,000th hit. When the HOF voting is nearing, some journalists discover that he, Stan Ross, lacks three hits due to a clerical error. As a result, Ross makes his comeback only to get 3,000 hits. During the movie, Ross behaves like an arrogant prick that proves to be a bad teammate.
Eventually in the end of the movie, when he only needs one hit to get his 3,000th hit, a bunt is needed to get the win. He lays down a sacrifice hit and the Brewers win the game. Even though he doesn’t get 3,000 hits, this action will earn him a spot in the Hall of Fame. Another improbable story that is entertaining at best.

8.  Angels In The Outfield
This remake of the 1951 movie with the same name. The story is about a little boy that is a huge fan of the California Angels. The kid is a foster child and asks his widowed father when they will be a family again. His father gives a sarcastical answer: “When the Angels win a pennant.”  The kid believes his father and start to pray for help. At a game between the Angels and the Blue Jays, the kid sees some angels help the players of the club. He seems to be the only one who can see the heavenly creatures. The Angels are helped through the season but have to do it without the help of the angels in the final game of the season. Nevertheless, they win and clinch the pennant.
Also entertaining at best.

7.  Million Dollar Arm
Based on a true story this movie is about a talent show for baseball pitchers in India. Sports agent J.B. Bernstein realizes that India has a huge potential with over a billion of inhabitants. With this reality show, he tries to scout two pitchers that will be offered a contract with a Major League organization. Of course, two cricket bowlers win the contest and are offered a contract with the Pittsburgh Pirates after a tryout. Even though the movie is based on a true story, it never becomes interesting. The movie isn’t the worst baseball movie but it cannot impress either. 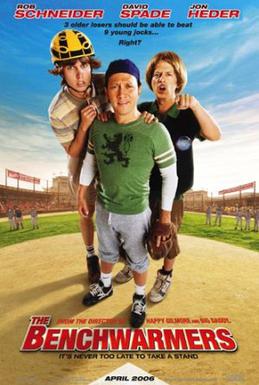 6.  Benchwarmers
Story about three adult nerds that become part of a little league team of rejects. The kids on this team are the so-called bench warmers in other teams, as were the adults too in their childhood days. Roy Schneider is starring as Gus Matthews, who is pretty good at baseball even though he has no record as he did get the chance to play in his childhood. Reggie Jackson also got a small part in this movie that is supposed to be a comedy but that is never really funny.
Entertaining at best.

5.  Little Big League
The story is about a twelve-year-old kid that inherits the Minnesota Twins. The kid inherits a crappy team but as soon as he takes over as the manager of the team, the Twins start to play better. Quite an unbelievable story. There are a lot of cameos in this movie: Kenny Griffey Jr, Randy Johnson, Carlos Baerga, Sandy Alomar.

4.  Talent for the Game
This movie is about a baseball scout for the California Angels, played by Edward James Olmos (known for his role in Miami Vice). In this movie, Olmos discovers a very talented pitcher, country boy Sammy Bodeen. Bodeen is blessed with a cannon of an arm. Bodeen doesn’t have any pro experience but will debut with the Angels without having pitched a game in the minors as the owner of the Angels wants to get a quick buck. Olmos clearly isn’t happy with the decision of his boss.
Bad story and not the best acting.

3.  The Fan
This is a story about a big baseball fan who is obsessed with the newest acquisition of the San Francisco Giants, Bobby Rayburn, played by Wesley Snipes. The fan, played by Robert de Niro, is doing everything to make Rayburn succeed. Especially when Rayburn struggles during the first part of the season. De Niro doesn’t shy away from killing Rayburn’s teammate because he doesn’t want to renounce his uniform number. As this movie is merely a psychological thriller, baseball is only used as an excuse. 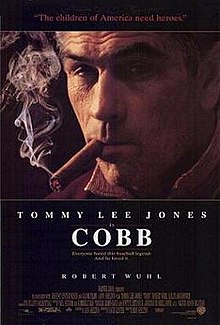 2. Cobb
Story about alleged racist Ty Cobb. Tommy Lee Jones stars as the Georgia Peach. The acting in this movie appears very exaggerated to me. The settings are good, as most, if not all, baseball scenes are shot at Rickwood Field, the former home of the Birmingham Barons and the oldest still standing ballpark in the USA.
For a movie about a legendary player, they could have chosen an actor who looked more like Cobb. The box office results were far from what they expected. I can understand why.

1. The Babe
This movie from 1992 is about the life of the legendary Babe Ruth. John Goodman, normally starring in comedies, is playing Babe Ruth and he isn’t at his best in this movie.
The acting is bad, so are the settings. To me, this movie appears to be a low budget film with which the film company wanted to earn a quick buck.