The Disciples are located in one of the suburbs of the Bavarian capital München (Munich), Haar. The original colors of the club were purple with yellow, but the flagship team which is playing in the highest German League, the 1. Bundesliga, has turned to black and yellow. Since yellow is my favorite color, it won’t come as a surprise that this one is in my top ten.

two years ago, the club changed its logo and I must say that it is an improvement over the previous one, which wasn’t bad either. What I like about this cap is the modern look of the logo. Even though I like a traditional look, I can appreciate some modern logos as well.

8. Deurne Spartans
The current Belgian champion has a nice forest green cap. What I like about this cap is that there is not just a letter on the front of the cap, but a logo. Sure this logo is similar to the one of Michigan State, but on the back of the cap is written “Deurne Spartans” to give it a kind of own identity.

7. Solingen Alligators
The two-time German champion sports a forest green cap with an interlocking AS logo which resembles that of Arizona State very much. A nice addition to the logo are two golden stars that represent each of the two championships. What I like about this cap is the color and the interlocking logo. 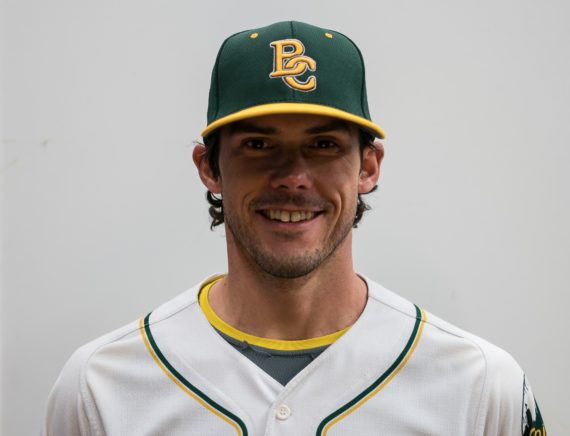 The Bonn Capitals, named that way in a time that Bonn still was the capital of (West) Germany, sport a nice green and yellow home cap. The crown is green and the lid is yellow. On the front of the cap, there is a nice interlocking BC logo.

5. Templiers de Sénart
Templiers is French for Knights Templar. As the logo of the club is a knight, the cap logo is a baseball bat disguised as a moving mace. The logo is a kind of comic like, just like many minor league clubs have. That is what I like about this logo. The Untouchables are located about 50 km Northeast of Dortmund. The home cap the club is sporting has a green crown and a yellow lid. The cap logo is a yellow U. I like the two-tone cap and the simple U as cap logo. 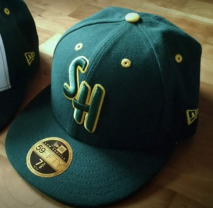 The Saarlouis Hornets are playing in the 1. Bundesliga Süd (South). The club sports ahunter green cap with SH in pale yellow. Also, the button on top and the eyelets are in pale yellow. Especially the pale yellow eyelets give a nice twist to the cap.

2. Dohren Wild Farmers
Dohren is located about 40 km Southwest of Hamburg, Germany. The village has about

1,200 inhabitants. Since their return in the 1. Bundesliga, I am intrigued by this club. How is it possible they manage to compete with only 1,200 inhabitants.
The club sports an all-black cap that has a farmer head on the front. The farmer head wears a straw hat and has a straw sticking out of his mouth.

San Marino is an independent state that is completely surrounded by Italy. The local club is playing in the Italian Serie A1, Italy’s major league, a rather unique situation. The club’s cap shows a baby hawk or hawk chick posing in a batting stance. This comic-like character plus the San Marino flag on the rear of the cap is what I like about it.

2 Replies to “My top ten of European ballcaps”