If there is one comic intertwined with baseball, it is Peanuts by Charles M. Schultz. The comic that first appeared on October 2nd, 1950 and ran 50 years until February 13, 2000, the day after Schultz passed away, paid attention to baseball about ten percent of all episodes. 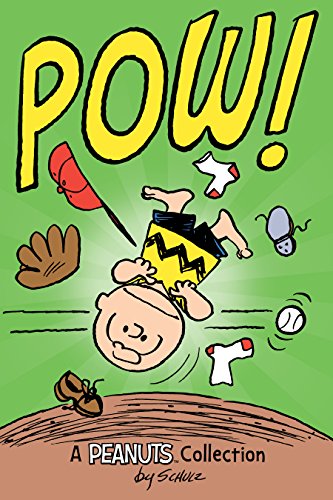 A comic about American kids should contain baseball. Especially in the 1950s, an era that was marked as the golden age of baseball. The main character of the comic, Charlie Brown is the manager of his baseball team. He also serves as the team’s pitcher even though he is not very good and often beaten up as he gives up big hits that tend to knock him off the mound. But the rest of his team isn’t very good either. Most of the time, the team loses with big numbers and at one moment, Charlie Brown even calls his team winless. Still, the team manages to win a couple of times but in those cases, Charlie Brown isn’t with the team. Lucy who is playing right field is perhaps the worst player on the team. She’s always looking for excuses why she missed another fly ball. Perhaps the most iconic excuse was when she claimed to be blinded by the sun on an overcast day.

The team also includes Snoopy as the shortstop, who tends to fall asleep during the game; in at least one strip, a claim is made that he cannot throw, although he can catch the ball rather well using his mouth. Snoopy is also the groundskeeper and is helped by Woodstock and his friends. The catcher, Schroeder, doesn’t know how to throw, and he hides this inability by having something to say to Charlie Brown when walking to the pitcher’s mound to give the ball back. Although Charlie Brown was seen catching a ball from the direction of home plate in the comic strip on May 9, 1973, Schroeder is never seen throwing the ball back. Every time that “Pig-Pen” hits a ball he is unable to run as the air is to dirty. Linus has untied shoelaces and bumps every time he runs. Frieda, Violet, 5, Shermy and Patty are terrible at catching. The ball almost always falls in the middle of them. Sally, Eudora, and Roy always make excuses for leaving the team. Woodstock and his friends can’t use the baseball bat.

Even though the team had some big losses, the biggest of them all is a 100-0 loss, a score that is mentioned in the newspaper the next day. This newspaper calls Charlie Brown’s team hapless.

During the almost fifty year run of the comic, the team manages to win ten times:

April 26, 1958: It is the first game of the season, and Charlie Brown ends up in bed sick. After the game, Charlie Brown’s team comes into his room, and tell him, “We didn’t do anything you told us. In fact, we didn’t even miss you!” And as a result, the team wins the game.

June 10, 1965: Charlie Brown has been shipped off to summer camp, when he receives a letter from Linus that says, “I suppose you are worried about your baseball team. Well, don’t worry… we’re doing fine… in fact, yesterday we won the first game we’ve won all season.”

August 5, 1966: Charlie Brown is hit on the head with a line drive, and has to sit on the bench. After the game, Lucy comes over to brag that the team won.

August 1, 1967: Upset with his team’s poor performance, Charlie Brown decides to go home and lie in a darkened room in the strip from July 28, 1967. In his absence, his team wins a few days later.

April 22, 1969: When Peppermint Patty’s team is unable to show up, they forfeit the game, giving Charlie Brown’s team a win.

April 23, 1969: Five of Franklin’s team members are unable to make it, so the game is forfeited, letting Charlie Brown win again.

In April 1973, Lucy convinces a reluctant Charlie Brown to let her infant brother Rerun join the team. Due to the opposing pitcher’s inability to pitch to Rerun, the team scores a rare victory. The win is eventually stripped from the team by the little league president, as Rerun had gambled a nickel on the game with Snoopy. Rerun’s excuse is that he was new to the world, and did not know gambling was wrong.

Apart from the forfeits, all of these wins happen when Charlie Brown is not there. However, Charlie Brown leads his team to victory on two occasions.

March 30, 1993, Hitting against Royanne Hobbs, Charlie Brown hits his first home run and wins the game for his team.

No matter how bad Charlie Brown is at playing baseball, he is an example as he is always showing up even if the circumstances are far from ideal. Most of the time when his teammates have long gone, he is still out on the mound.

You can only wonder why Charlie Brown kept playing for 50 years. Big losses and getting the blame for those losses ((“IT’S ALL YOUR FAULT WE LOST!”) would be a reason for many to quit. Perhaps his love for the game is bigger than the frustration of those losses.

Even though Charlie and his team were hapless most of the time, they made it to the Hall of Fame in Cooperstown. In 2000, the year Charles M. Schultz passed away, the HOF had an exhibition under the name of “You’re in the Hall of Fame Charlie Brown,”  later that year that showed more than 50 of the 1,800 baseball strips (which were only ten percent of the total series). The Buffalo News reported about this exhibition as it headed “Charlie Brown gets some respect.”